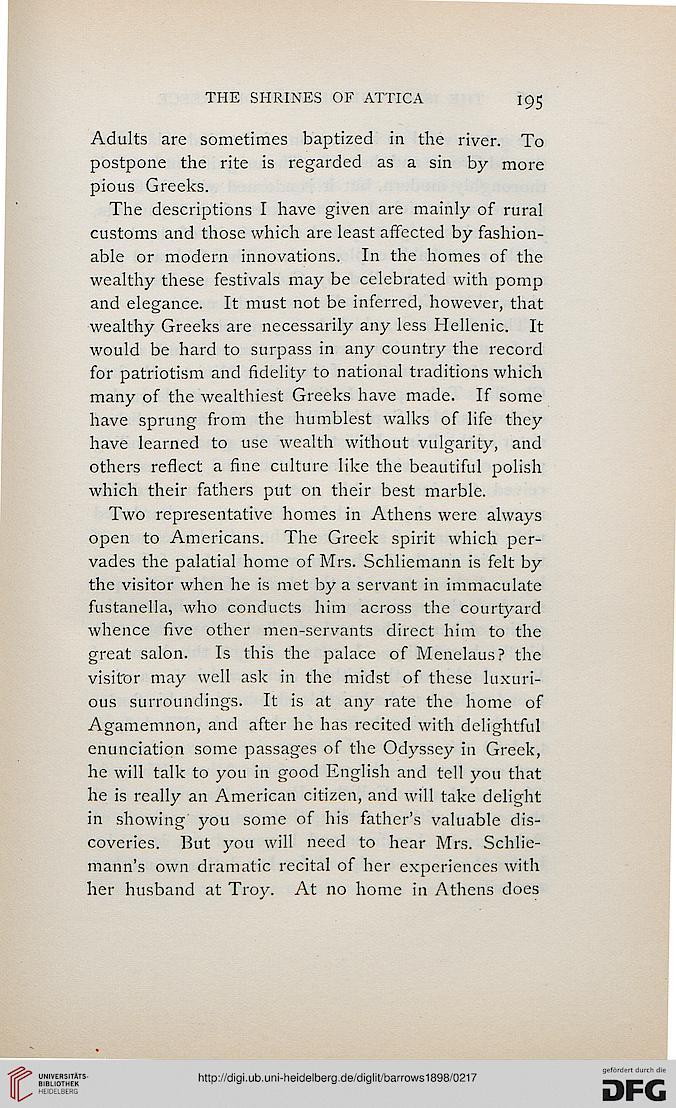 Information about OCR text
THE SHRINES OF ATTICA 195

Adults are sometimes baptized in the river. To
postpone the rite is regarded as a sin by more
pious Greeks.

The descriptions I have given are mainly of rural
customs and those which are least affected by fashion-
able or modern innovations. In the homes of the
wealthy these festivals may be celebrated with pomp
and elegance. It must not be inferred, however, that
wealthy Greeks are necessarily any less Hellenic. It
would be hard to surpass in any country the record
for patriotism and fidelity to national traditions which
many of the wealthiest Greeks have made. If some
have sprung from the humblest walks of life they
have learned to use wealth without vulgarity, and
others reflect a fine culture like the beautiful polish
which their fathers put on their best marble.

Two representative homes in Athens were always
open to Americans. The Greek spirit which per-
vades the palatial home of Mrs. Schliemann is felt by
the visitor when he is met by a servant in immaculate
fustanella, who conducts him across the courtyard
whence five other men-servants direct him to the
great salon. Is this the palace of Menclaus? the
visitor may well ask in the midst of these luxuri-
ous surroundings. It is at any rate the home of
Agamemnon, and after he has recited with delightful
enunciation some passages of the Odyssey in Greek,
he will talk to you in good English and tell you that
he is really an American citizen, and will take delight
in showing you some of his father's valuable dis-
coveries. But you will need to hear Mrs. Schlie-
mann's own dramatic recital of her experiences with
her husband at Troy. At no home in Athens does