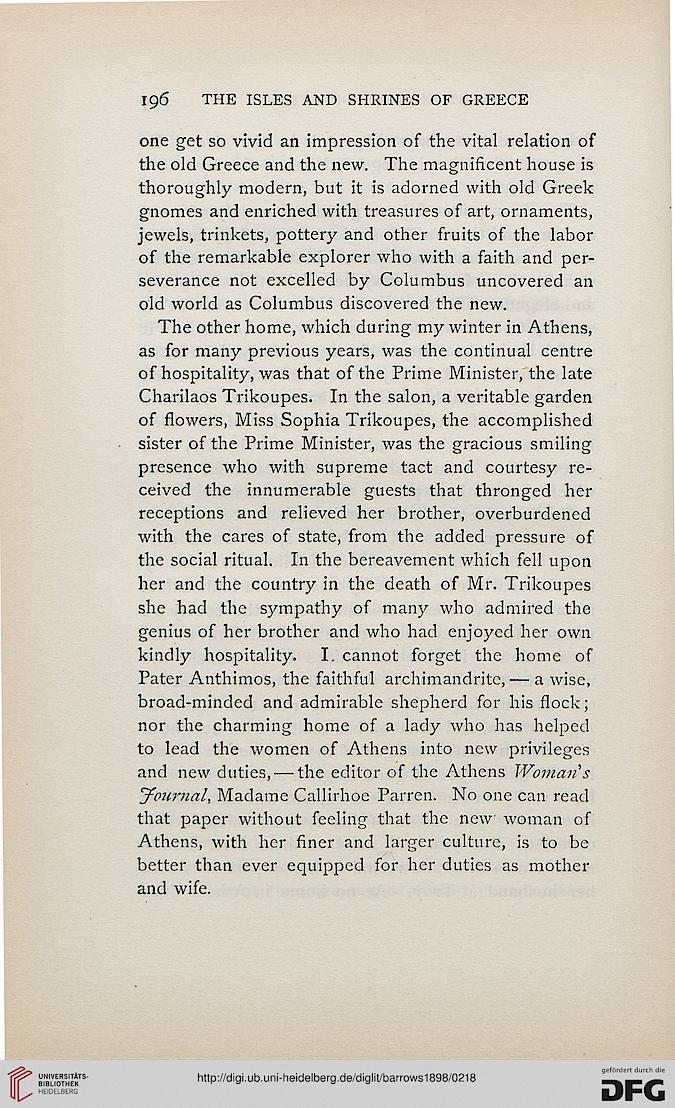 Information about OCR text
196 THE ISLES AND SHRINES OF GREECE

one get so vivid an impression of the vital relation of
the old Greece and the new. The magnificent house is
thoroughly modern, but it is adorned with old Greek
gnomes and enriched with treasures of art, ornaments,
jewels, trinkets, pottery and other fruits of the labor
of the remarkable explorer who with a faith and per-
severance not excelled by Columbus uncovered an
old world as Columbus discovered the new.

The other home, which during my winter in Athens,
as for many previous years, was the continual centre
of hospitality, was that of the Prime Minister, the late
Charilaos Trikoupes. In the salon, a veritable garden
of flowers, Miss Sophia Trikoupes, the accomplished
sister of the Prime Minister, was the gracious smiling
presence who with supreme tact and courtesy re-
ceived the innumerable guests that thronged her
receptions and relieved her brother, overburdened
with the cares of state, from the added pressure of
the social ritual. In the bereavement which fell upon
her and the country in the death of Mr. Trikoupes
she had the sympathy of many who admired the
genius of her brother and who had enjoyed her own
kindly hospitality. I. cannot forget the home of
Pater Anthimos, the faithful archimandrite, — a wise,
broad-minded and admirable shepherd for his flock;
nor the charming home of a lady who has helped
to lead the women of Athens into new privileges
and new duties, — the editor of the Athens Woman's
yournal, Madame Callirhoe Parren. No one can read
that paper without feeling that the new woman of
Athens, with her finer and larger culture, is to be
better than ever equipped for her duties as mother
and wife.