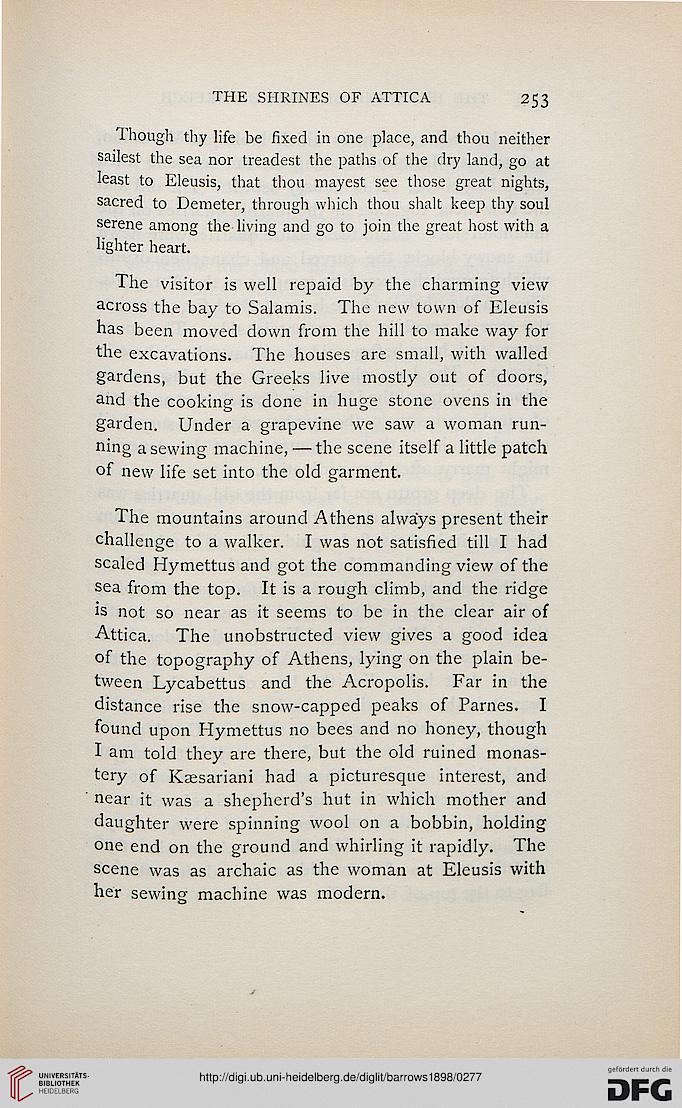 Information about OCR text
THE SHRINES OF ATTICA 253

Though thy life be fixed in one place, and thou neither
sailest the sea nor treadest the paths of the dry land, go at
least to Eleusis, that thou mayest see those great nights,
sacred to Demeter, through which thou shalt keep thy soul
serene among the living and go to join the great host with a
lighter heart.

The visitor is well repaid by the charming view
across the bay to Salamis. The new town of Eleusis
has been moved down from the hill to make way for
the excavations. The houses are small, with walled
gardens, but the Greeks live mostly out of doors,
and the cooking is done in huge stone ovens in the
garden. Under a grapevine we saw a woman run-
ning a sewing machine, —the scene itself a little patch
of new life set into the old garment.

The mountains around Athens always present their
challenge to a walker. I was not satisfied till I had
scaled Hymettus and got the commanding view of the
sea from the top. It is a rough climb, and the ridge
is not so near as it seems to be in the clear air of
Attica. The unobstructed view gives a good idea
of the topography of Athens, lying on the plain be-
tween Lycabettus and the Acropolis. Far in the
distance rise the snow-capped peaks of Parnes. I
found upon Hymettus no bees and no honey, though
I am told they are there, but the old ruined monas-
tery of Kaesariani had a picturesque interest, and
near it was a shepherd's hut in which mother and
daughter were spinning wool on a bobbin, holding
one end on the ground and whirling it rapidly. The
scene was as archaic as the woman at Eleusis with
her sewing machine was modern.