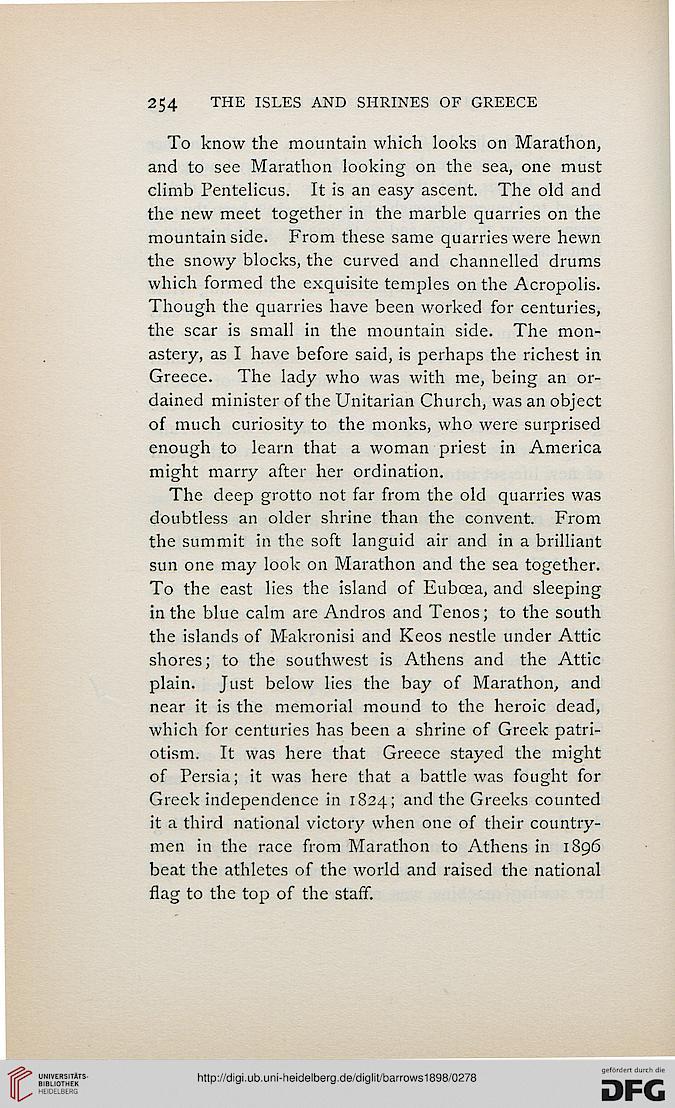 Information about OCR text
254 THE ISLES AND SHRINES OF GREECE

To know the mountain which looks on Marathon,
and to see Marathon looking on the sea, one must
climb Pentelicus. It is an easy ascent. The old and
the new meet together in the marble quarries on the
mountainside. From these same quarries were hewn
the snowy blocks, the curved and channelled drums
which formed the exquisite temples on the Acropolis.
Though the quarries have been worked for centuries,
the scar is small in the mountain side. The mon-
astery, as I have before said, is perhaps the richest in
Greece. The lady who was with me, being an or-
dained minister of the Unitarian Church, was an object
of much curiosity to the monks, who were surprised
enough to learn that a woman priest in America
might marry after her ordination.

The deep grotto not far from the old quarries was
doubtless an older shrine than the convent. From
the summit in the soft languid air and in a brilliant
sun one may look on Marathon and the sea together.
To the east lies the island of Euboea, and sleeping
in the blue calm are Andros and Tcnos; to the south
the islands of Makronisi and Keos nestle under Attic
shores; to the southwest is Athens and the Attic
plain. Just below lies the bay of Marathon, and
near it is the memorial mound to the heroic dead,
which for centuries has been a shrine of Greek patri-
otism. It was here that Greece stayed the might
of Persia; it was here that a battle was fought for
Greek independence in 1824; and the Greeks counted
it a third national victory when one of their country-
men in the race from Marathon to Athens in 1896
beat the athletes of the world and raised the national
flag to the top of the staff.