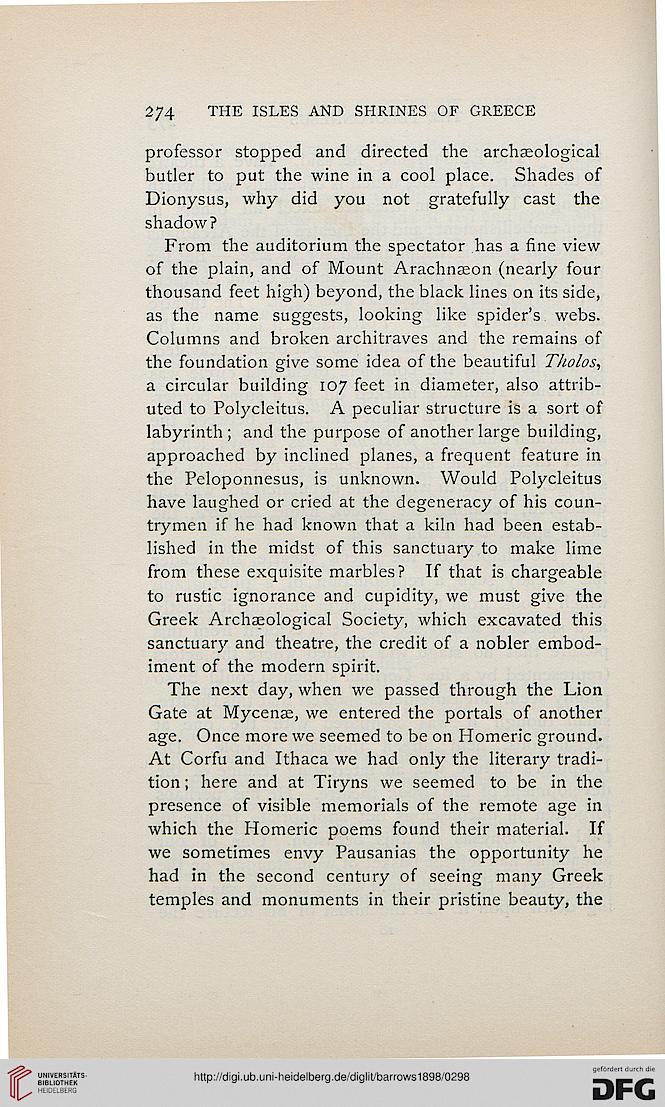 Information about OCR text
274 THE ISLES AND SHRINES OF GREECE

professor stopped and directed the archaeological
butler to put the wine in a cool place. Shades of
Dionysus, why did you not gratefully cast the
shadow?

From the auditorium the spectator has a fine view
of the plain, and of Mount Arachnseon (nearly four
thousand feet high) beyond, the black lines on its side,
as the name suggests, looking like spider's webs.
Columns and broken architraves and the remains of
the foundation give some idea of the beautiful Tholos,
a circular building 107 feet in diameter, also attrib-
uted to Polycleitus. A peculiar structure is a sort of
labyrinth; and the purpose of another large building,
approached by inclined planes, a frequent feature in
the Peloponnesus, is unknown. Would Polycleitus
have laughed or cried at the degeneracy of his coun-
trymen if he had known that a kiln had been estab-
lished in the midst of this sanctuary to make lime
from these exquisite marbles? If that is chargeable
to rustic ignorance and cupidity, we must give the
Greek Archaeological Society, which excavated this
sanctuary and theatre, the credit of a nobler embod-
iment of the modern spirit.

The next day, when we passed through the Lion
Gate at Mycenae, we entered the portals of another
age. Once more we seemed to be on Homeric ground.
At Corfu and Ithaca we had only the literary tradi-
tion ; here and at Tiryns we seemed to be in the
presence of visible memorials of the remote age in
which the Homeric poems found their material. If
we sometimes envy Pausanias the opportunity he
had in the second century of seeing many Greek
temples and monuments in their pristine beauty, the