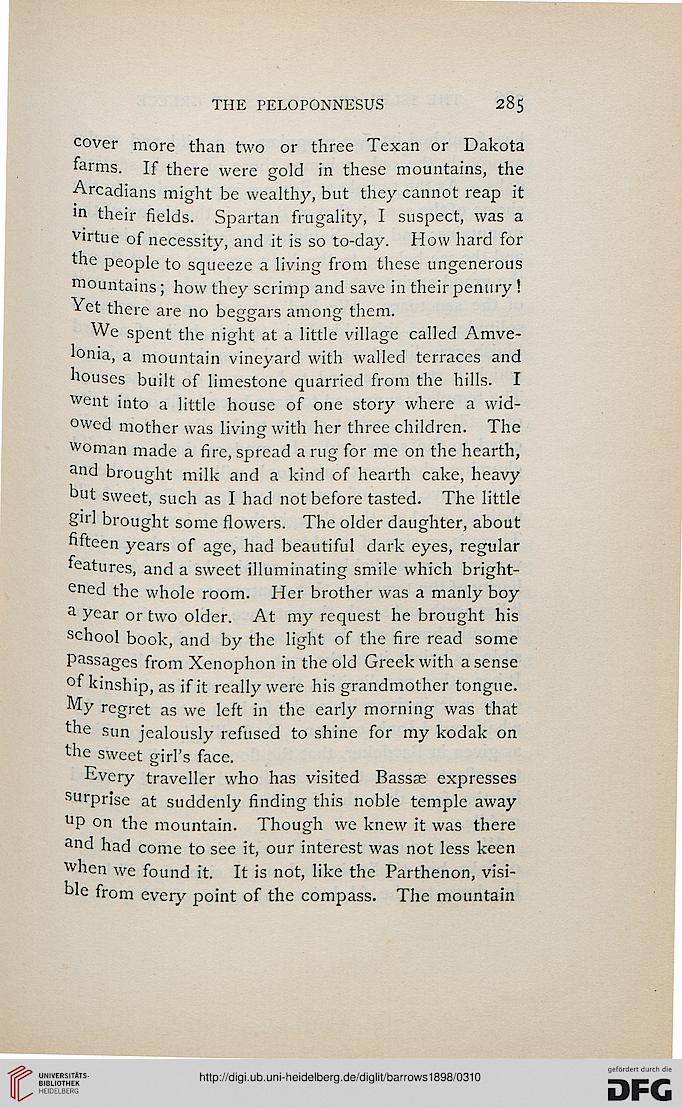 Information about OCR text
THE PELOPONNESUS 285

cover more than two or three Texan or Dakota
farms. If there were gold in these mountains, the
Arcadians might be wealthy, but they cannot reap it
m their fields. Spartan frugality, I suspect, was a
virtue of necessity, and it is so to-day. How hard for
the people to squeeze a living from these ungenerous
roountains; how they scrimp and save in their penury !
*et there are no beggars among them.

We spent the night at a little village called Arave-
lonia, a mountain vineyard with walled terraces and
houses built of limestone quarried from the hills. I
wcnt into a little house of one story where a wid-
owed mother was living with her three children. The
woman made a fire, spread a rug for me on the hearth,
and brought milk and a kind of hearth cake, heavy
out sweet, such as I had not before tasted. The little
girl brought some flowers. The older daughter, about
nfteen years of age, had beautiful dark eyes, regular
•eatures, and a sweet illuminating smile which bright-
ened the whole room. Her brother was a manly boy
a year or two older. At my request he brought his
school book, and by the light of the fire read some
Passages from Xenophon in the old Greek with a sense
°f kinship, as if it really were his grandmother tongue.
My regret as we left in the early morning was that
the sun jealously refused to shine for my kodak on
the sweet girl's face.

kvcry traveller who has visited Bassse expresses
surprise at suddenly finding this noble temple away
UP on the mountain. Though we knew it was there
and had come to see it, our interest was not less keen
when we found it. It is not, like the Parthenon, visi-
ble from eveiy point of the compass. The mountain