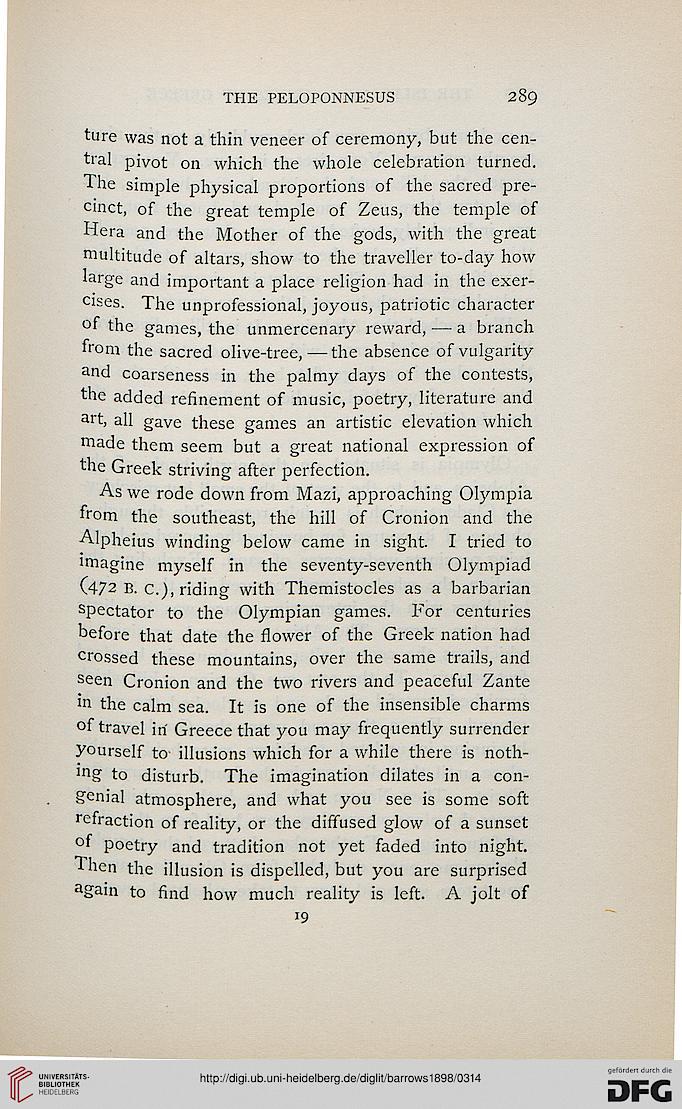 ture was not a thin veneer of ceremony, but the cen-
tral pivot on which the whole celebration turned.
The simple physical proportions of the sacred pre-
cinct, of the great temple of Zeus, the temple of
Hera and the Mother of the gods, with the great
multitude of altars, show to the traveller to-day how
large and important a place religion had in the exer-
cises. The unprofessional, joyous, patriotic character
of the games, the unmercenary reward, — a branch
from the sacred olive-tree,—the absence of vulgarity
and coarseness in the palmy days of the contests,
the added refinement of music, poetry, literature and
art, all gave these games an artistic elevation which
made them seem but a great national expression of
the Greek striving after perfection.

As we rode down from Mazi, approaching Olympia
from the southeast, the hill of Cronion and the
Alpheius winding below came in sight. I tried to
imagine myself in the seventy-seventh Olympiad
(472 B. c), riding with Themistocles as a barbarian
spectator to the Olympian games. For centuries
before that date the flower of the Greek nation had
crossed these mountains, over the same trails, and
seen Cronion and the two rivers and peaceful Zante
in the calm sea. It is one of the insensible charms
of travel in Greece that you may frequently surrender
yourself to illusions which for a while there is noth-
]ng to disturb. The imagination dilates in a con-
genial atmosphere, and what you see is some soft
refraction of reality, or the diffused glow of a sunset
°f poetry and tradition not yet faded into night.
■I hen the illusion is dispelled, but you are surprised
again to find how much reality is left. A jolt of