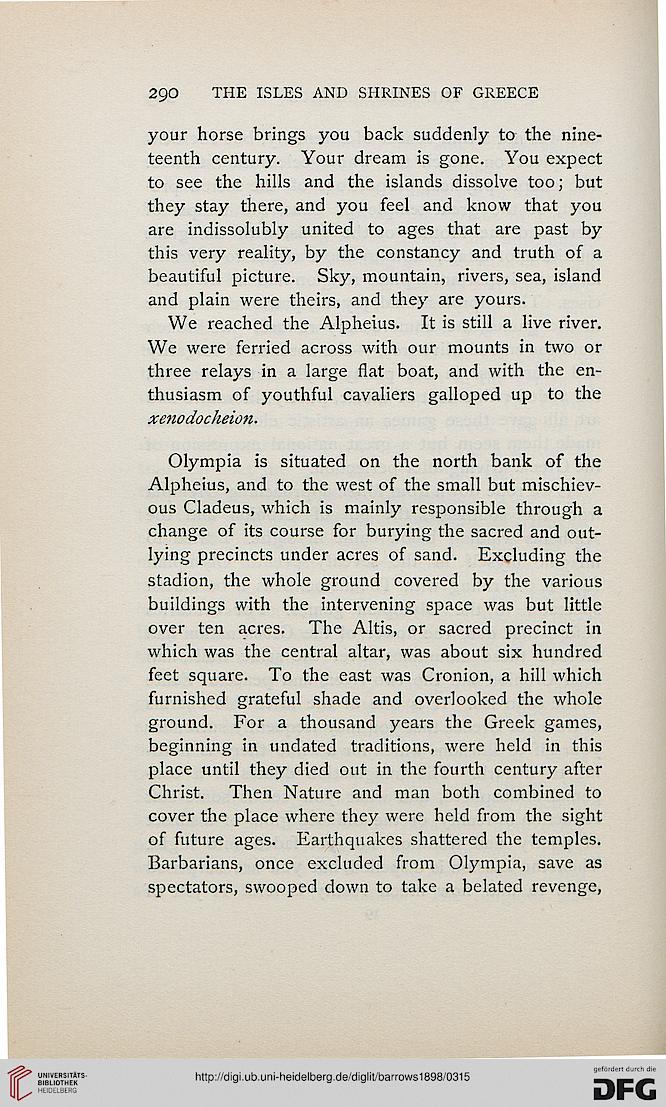 Information about OCR text
290 THE ISLES AND SHRINES OF GREECE

your horse brings you back suddenly to the nine-
teenth century. Your dream is gone. You expect
to see the hills and the islands dissolve too; but
they stay there, and you feel and know that you
are indissolubly united to ages that are past by
this very reality, by the constancy and truth of a
beautiful picture. Sky, mountain, rivers, sea, island
and plain were theirs, and they are yours.

We reached the Alpheius. It is still a live river.
We were ferried across with our mounts in two or
three relays in a large flat boat, and with the en-
thusiasm of youthful cavaliers galloped up to the
xenodocheion.

Olympia is situated on the north bank of the
Alpheius, and to the west of the small but mischiev-
ous Cladeus, which is mainly responsible through a
change of its course for burying the sacred and out-
lying precincts under acres of sand. Excluding the
stadion, the whole ground covered by the various
buildings with the intervening space was but little
over ten acres. The Altis, or sacred precinct in
which was the central altar, was about six hundred
feet square. To the east was Cronion, a hill which
furnished grateful shade and overlooked the whole
ground. For a thousand years the Greek games,
beginning in undated traditions, were held in this
place until they died out in the fourth century after
Christ. Then Nature and man both combined to
cover the place where they were held from the sight
of future ages. Earthquakes shattered the temples.
Barbarians, once excluded from Olympia, save as
spectators, swooped down to take a belated revenge,