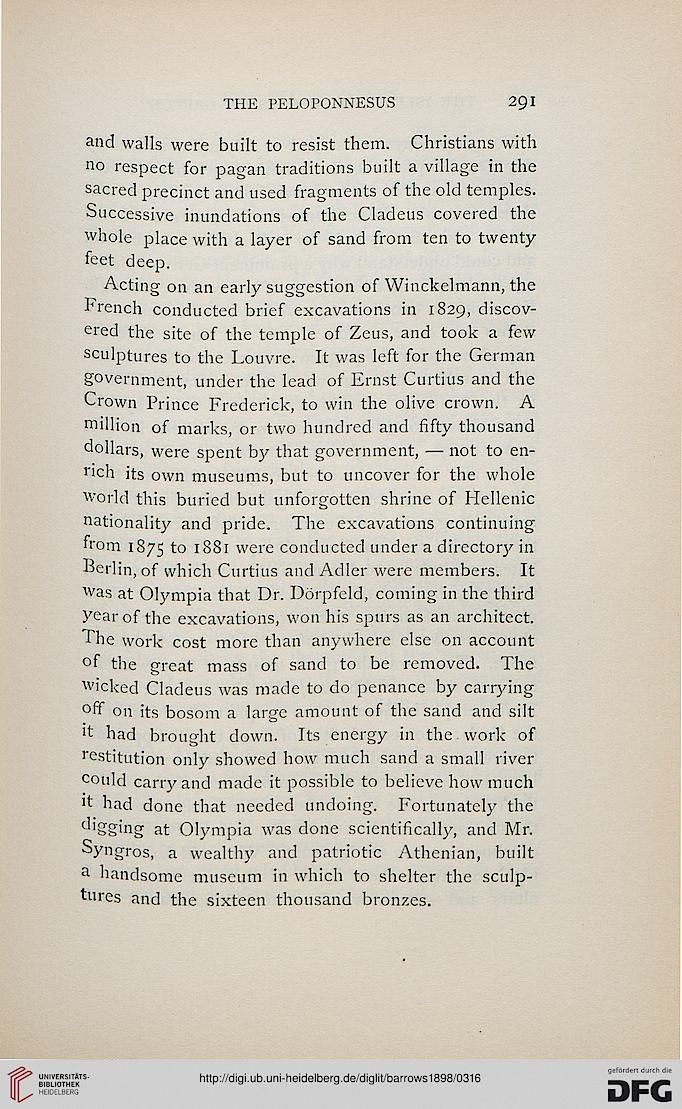 and walls were built to resist them. Christians with
no respect for pagan traditions built a village in the
sacred precinct and used fragments of the old temples.
Successive inundations of the Cladeus covered the
whole place with a layer of sand from ten to twenty
feet deep.

Acting on an early suggestion of Winckelmann, the
French conducted brief excavations in 1829, discov-
ered the site of the temple of Zeus, and took a few
sculptures to the Louvre. It was left for the German
government, under the lead of Ernst Curtius and the
Crown Prince Frederick, to win the olive crown. A
million of marks, or two hundred and fifty thousand
dollars, were spent by that government, — not to en-
rich its own museums, but to uncover for the whole
world this buried but unforgotten shrine of Hellenic
nationality and pride. The excavations continuing
from 1875 to 1881 were conducted under a directory in
Berlin, of which Curtius and Adler were members. It
Was at Olympia that Dr. Dorpfeld, coming in the third
year of the excavations, won his spurs as an architect.
The work cost more than anywhere else on account
of the great mass of sand to be removed. The
wicked Cladeus was made to do penance by carrying
°ff on its bosom a large amount of the sand and silt
't had brought down. Its energy in the work of
restitution only showed how much sand a small river
could carry and made it possible to believe how much
]t had done that needed undoing. Fortunately the
digging at Olympia was done scientifically, and Mr.
Syngros, a wealthy and patriotic Athenian, built
a handsome museum in which to shelter the sculp-
tures and the sixteen thousand bronzes.