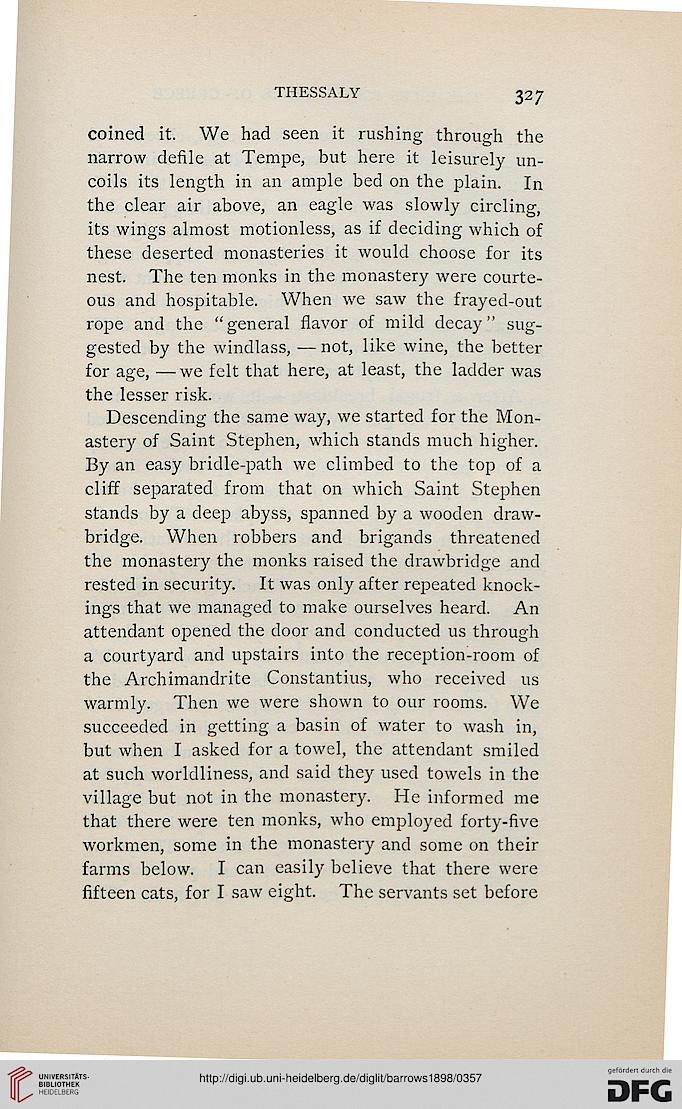 coined it. We had seen it rushing through the
narrow defile at Tempe, but here it leisurely un-
coils its length in an ample bed on the plain. In
the clear air above, an eagle was slowly circling,
its wings almost motionless, as if deciding which of
these deserted monasteries it would choose for its
nest. The ten monks in the monastery were courte-
ous and hospitable. When we saw the frayed-out
rope and the "general flavor of mild decay" sug-
gested by the windlass, ■—not, like wine, the better
for age, — we felt that here, at least, the ladder was
the lesser risk.

Descending the same way, we started for the Mon-
astery of Saint Stephen, which stands much higher.
By an easy bridle-path we climbed to the top of a
cliff separated from that on which Saint Stephen
stands by a deep abyss, spanned by a wooden draw-
bridge. When robbers and brigands threatened
the monastery the monks raised the drawbridge and
rested in security. It was only after repeated knock-
ings that we managed to make ourselves heard. An
attendant opened the door and conducted us through
a courtyard and upstairs into the reception-room of
the Archimandrite Constantius, who received us
warmly. Then we were shown to our rooms. We
succeeded in getting a basin of water to wash in,
but when I asked for a towel, the attendant smiled
at such worldliness, and said they used towels in the
village but not in the monastery. He informed me
that there were ten monks, who employed forty-five
workmen, some in the monastery and some on their
farms below. I can easily believe that there were
fifteen cats, for I saw eight. The servants set before