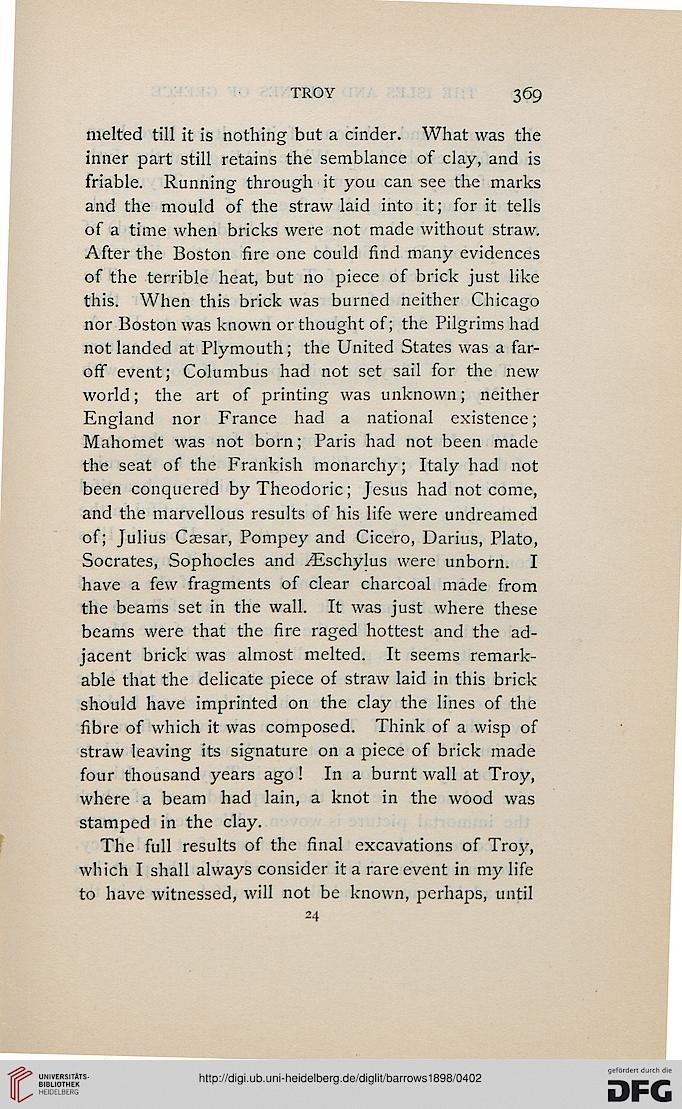 melted till it is nothing but a cinder. What was the
inner part still retains the semblance of clay, and is
friable. Running through it you can see the marks
and the mould of the straw laid into it; for it tells
of a time when bricks were not made without straw.
After the Boston fire one could find many evidences
of the terrible heat, but no piece of brick just like
this. When this brick was burned neither Chicago
nor Boston was known or thought of; the Pilgrims had
not landed at Plymouth; the United States was a far-
off event; Columbus had not set sail for the new
world; the art of printing was unknown; neither
England nor France had a national existence;
Mahomet was not born; Paris had not been made
the seat of the Frankish monarchy; Italy had not
been conquered by Thcodoric; Jesus had not come,
and the marvellous results of his life were undreamed
of; Julius Cassar, Pompey and Cicero, Darius, Plato,
Socrates, Sophocles and ^Eschylus were unborn. I
have a few fragments of clear charcoal made from
the beams set in the wall. It was just where these
beams were that the fire raged hottest and the ad-
jacent brick was almost melted. It seems remark-
able that the delicate piece of straw laid in this brick
should have imprinted on the clay the lines of the
fibre of which it was composed. Think of a wisp of
straw leaving its signature on a piece of brick made
four thousand years ago! In a burnt wall at Troy,
where a beam had lain, a knot in the wood was
stamped in the clay.

The full results of the final excavations of Troy,
which I shall always consider it a rare event in my life
to have witnessed, will not be known, perhaps, until