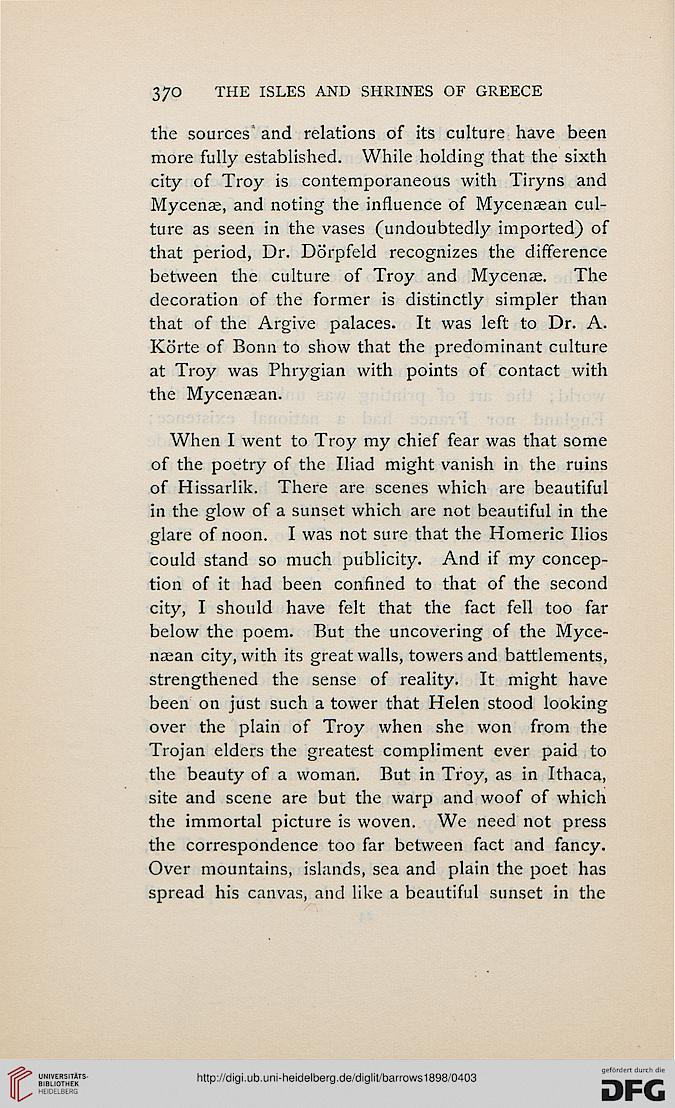 Information about OCR text
370 THE ISLES AND SHRINES OF GREECE

the sources' and relations of its culture have been
more fully established. While holding that the sixth
city of Troy is contemporaneous with Tiryns and
Mycenae, and noting the influence of Mycenaean cul-
ture as seen in the vases (undoubtedly imported) of
that period, Dr. Dorpfeld recognizes the difference
between the culture of Troy and Mycenae. The
decoration of the former is distinctly simpler than
that of the Argive palaces. It was left to Dr. A.
Korte of Bonn to show that the predominant culture
at Troy was Phrygian with points of contact with
the Mycenaean.

When I went to Troy my chief fear was that some
of the poetry of the Iliad might vanish in the ruins
of Hissarlik. There are scenes which are beautiful
in the glow of a sunset which are not beautiful in the
glare of noon. I was not sure that the Homeric Ilios
could stand so much publicity. And if my concep-
tion of it had been confined to that of the second
city, I should have felt that the fact fell too far
below the poem. But the uncovering of the Myce-
naean city, with its great walls, towers and battlements,
strengthened the sense of reality. It might have
been on just such a tower that Helen stood looking
over the plain of Troy when she won from the
Trojan elders the greatest compliment ever paid to
the beauty of a woman. But in Troy, as in Ithaca,
site and scene are but the warp and woof of which
the immortal picture is woven. We need not press
the correspondence too far between fact and fancy.
Over mountains, islands, sea and plain the poet has
spread his canvas, and like a beautiful sunset in the