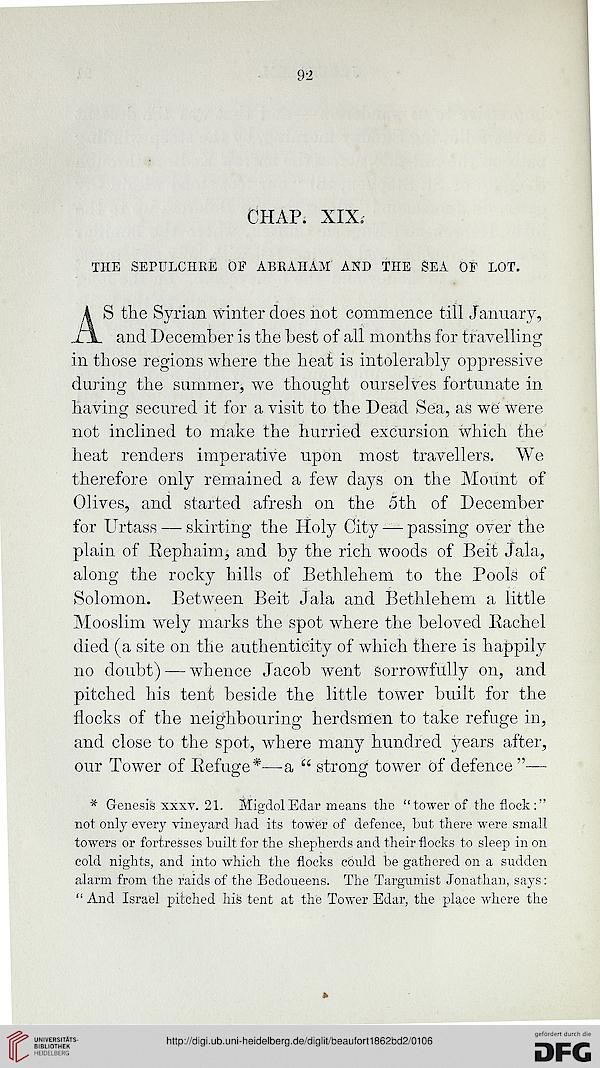 THE SEPULCHRE OP ABRAHAM AND THE SEA OP LOT.

AS the Syrian winter does not commence till January,
and December is the best of all months for travelling
in those regions where the heat is intolerably oppressive
during the summer, we thought ourselves fortunate in
having secured it for a visit to the Dead Sea, as we were
not inclined to make the hurried excursion which the
heat renders imperative upon most travellers. We
therefore only remained a few days on the Mount of
Olives, and started afresh on the 5th of December
for Urtass — skirting the Holy City — passing over the
plain of Eephaim, and by the rich woods of Beit Jala,
along the rocky hills of Bethlehem to the Pools of
Solomon. Between Beit Jala and Bethlehem a little
Mooslim wely marks the spot where the beloved Eachel
died (a site on the authenticity of which there is happily
no doubt) — whence Jacob went sorrowfully on, and
pitched his tent beside the little tower built for the
flocks of the neighbouring herdsmen to take refuge in,
and close to the spot, where many hundred years after,
our Tower of Eefuge*—a " strong tower of defence "—

* Genesis xxxv. 21. MigclolEdar means the "tower of the fiock:"
not only every vineyard had its tower of defence, but there were small
towers or fortresses built for the shepherds and their flocks to sleep in on
cold nights, and into which the flocks could be gathered on a sudden
alarm from the raids of the Bedoueens. The Targumist Jonathan, says:
" And Israel pitched his tent at the Tower Edar, the place where the