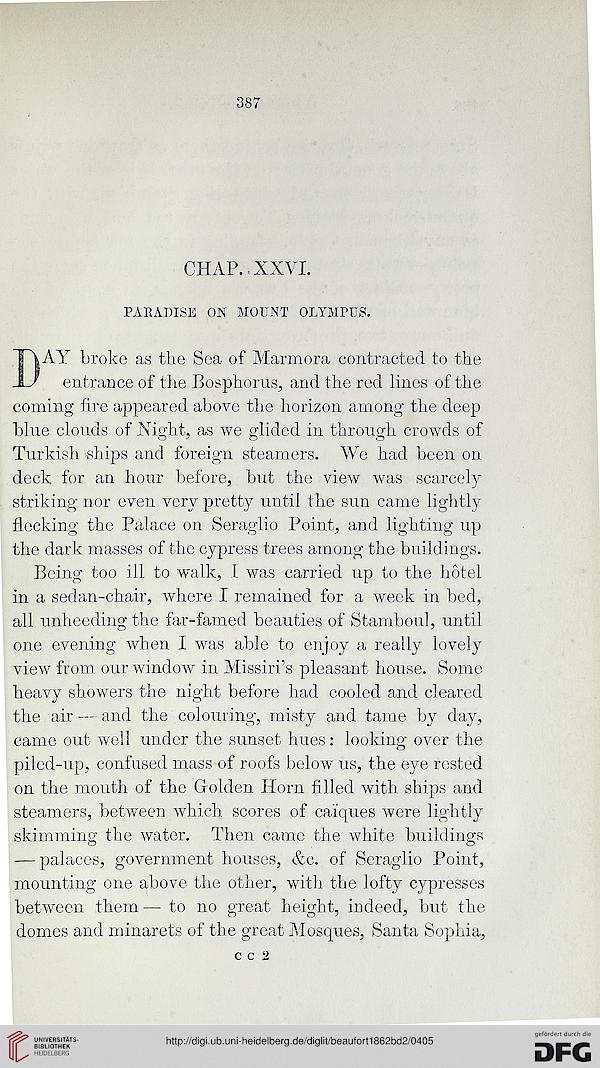 AY broke as the Sea of Marmora contracted to the
entrance of the Bosphorus, and the red lines of the
coming fire appeared above the horizon among the deep
blue clouds of Night, as we glided in through crowds of
Turkish ships and foreign steamers. We had been on
deck for an hour before, but the view was scarcely
striking nor even very pretty until the sun came lightly
flecking the Palace on Seraglio Point, and lighting up
the dark masses of the cypress trees among the buildings.

Being too ill to walk, I was carried up to the hotel
in a sedan-chair, where I remained for a week in bed,
all unheeding the far-famed beauties of Stamboul, until
one evening when I was able to enjoy a really lovely
view from our window in Missiri's pleasant house. Some
heavy showers the night before had cooled and cleared
the air — and the colouring, misty and tame by day,
came out well under the sunset hues: looking over the
piled-up, confused mass of roofs below us, the eye rested
on the mouth of the Grolden Horn filled with ships and
steamers, between which scores of caiques were lightly
skimming the water. Then came the white buildings
— palaces, government houses, &c. of Seraglio Point,
mounting one above the other, with the lofty cypresses
between them— to no great height, indeed, but the
domes and minarets of the great Mosques, Santa Sophia,