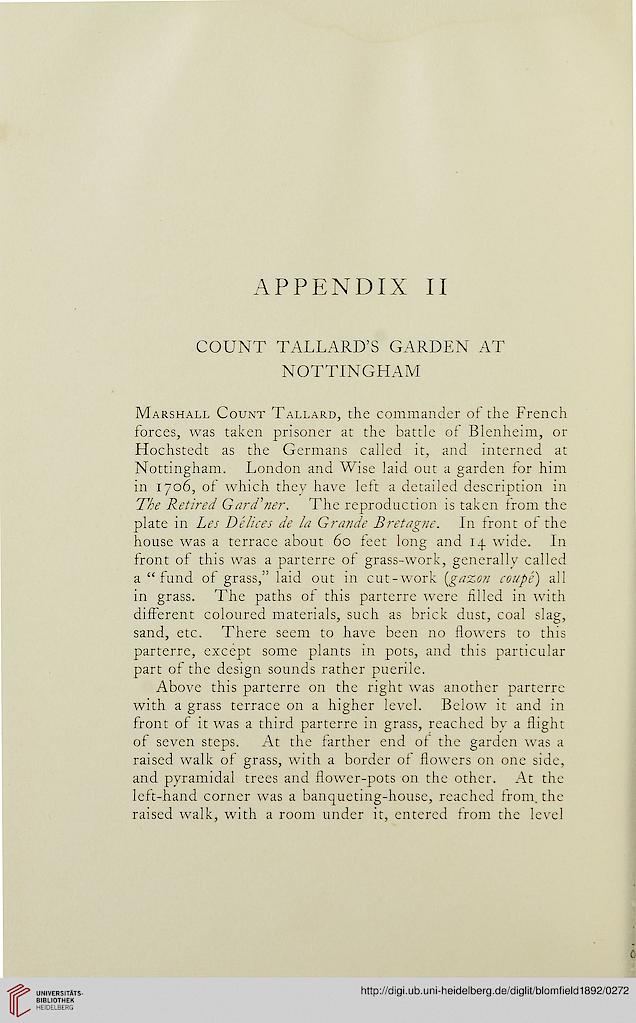 Marshall Count Tallard, the commander of the French
forces, was taken prisoner at the battle of- Blenheim, or
Hochstedt as the Germans called it, and interned at
Nottingham. London and Wise laid out a garden for him
in 1706, of which they have left a detailed description in
The Retired Gardiner. The reproduction is taken from the
plate in Les D'elices de la Grande Bretagne. In front of the
house was a terrace about 60 feet long and 14 wide. In
front of this was a parterre of grass-work, generally called
a "fund of grass," laid out in cut-work (gazon coupe) all
in grass. The paths of this parterre were filled in with
different coloured materials, such as brick dust, coal slag,
sand, etc. There seem to have been no flowers to this
parterre, except some plants in pots, and this particular
part of the design sounds rather puerile.

Above this parterre on the right was another parterre
with a grass terrace on a higher level. Below it and in
front of it was a third parterre in grass, reached by a flight
of seven steps. At the farther end of the garden was a
raised walk of grass, with a border of flowers on one side,
and pyramidal trees and flower-pots on the other. At the
left-hand corner was a banqueting-house, reached from, the
raised walk, with a room under it, entered from the level