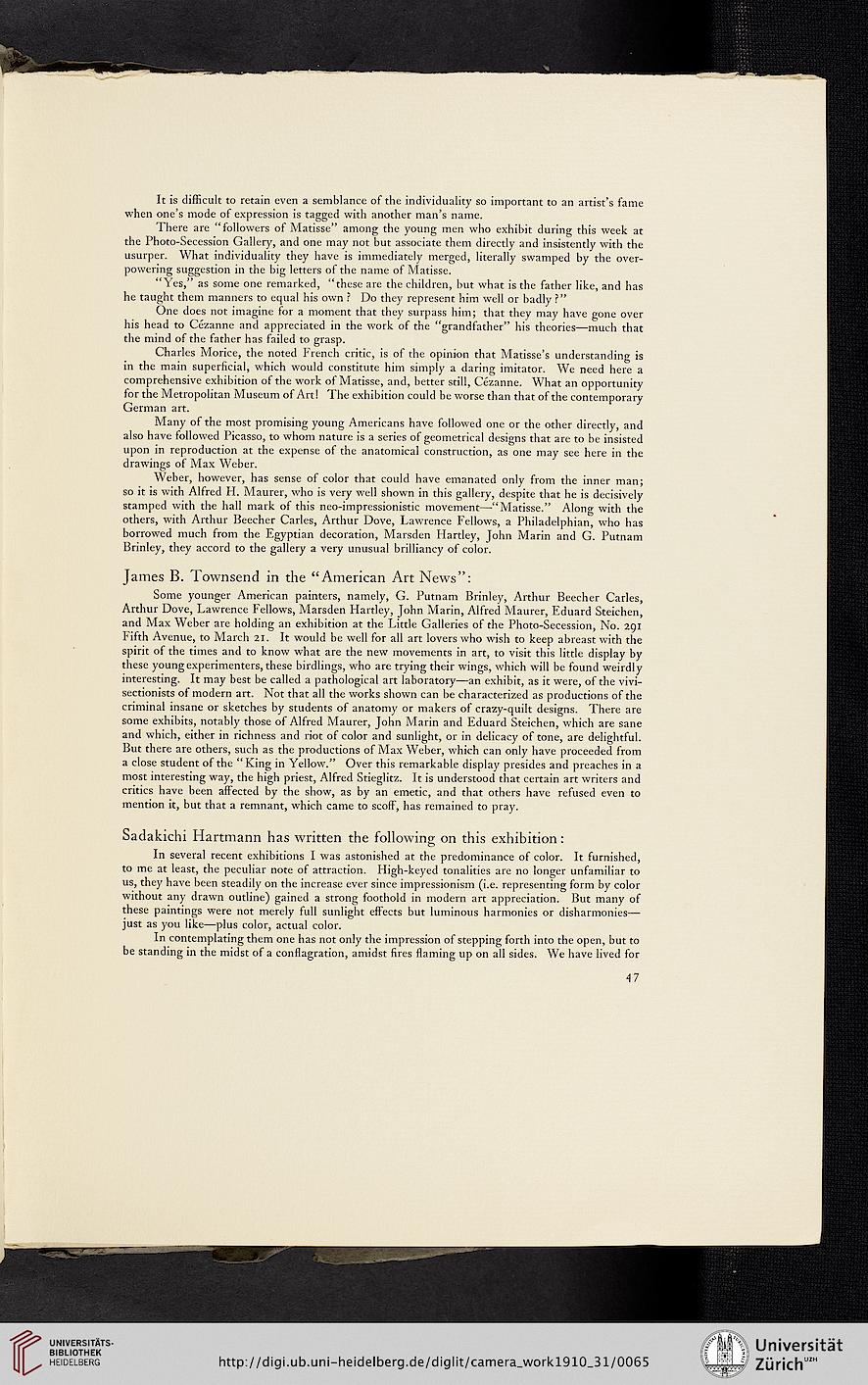 Information about OCR text
It is difficult to retain even a semblance of the individuality so important to an artist’s fame
when one’s mode of expression is tagged with another man’s name.
There are “followers of Matisse" among the young men who exhibit during this week at
the Photo-Secession Gallery, and one may not but associate them directly and insistently with the
usurper. What individuality they have is immediately merged, literally swamped by the over-
powering suggestion in the big letters of the name of Matisse.
“Yes,” as some one remarked, “these are the children, but what is the father like, and has
he taught them manners to equal his own ? Do they represent him well or badly ?”
One does not imagine for a moment that they surpass him; that they may have gone over
his head to Cézanne and appreciated in the work of the “grandfather” his theories—much that
the mind of the father has failed to grasp.
Charles Morice, the noted French critic, is of the opinion that Matisse’s understanding is
in the main superficial, which would constitute him simply a daring imitator. We need here a
comprehensive exhibition of the work of Matisse, and, better still, Cézanne. What an opportunity
for the Metropolitan Museum of Art! The exhibition could be worse than that of the contemporary
German art.
Many of the most promising young Americans have followed one or the other directly, and
also have followed Picasso, to whom nature is a series of geometrical designs that are to be insisted
upon in reproduction at the expense of the anatomical construction, as one may see here in the
drawings of Max Weber.
Weber, however, has sense of color that could have emanated only from the inner man;
so it is with Alfred H. Maurer, who is very well shown in this gallery, despite that he is decisively
stamped with the hall mark of this neo-impressionistic movement—“Matisse.” Along with the
others, with Arthur Beecher Carles, Arthur Dove, Lawrence Fellows, a Philadelphian, who has
borrowed much from the Egyptian decoration, Marsden Hartley, John Marin and G. Putnam
Brinley, they accord to the gallery a very unusual brilliancy of color.
James B. Townsend in the “American Art News”:
Some younger American painters, namely, G. Putnam Brinley, Arthur Beecher Carles,
Arthur Dove, Lawrence Fellows, Marsden Hartley, John Marin, Alfred Maurer, Eduard Steichen,
and Max Weber are holding an exhibition at the Little Galleries of the Photo-Secession, No. 291
Fifth Avenue, to March 21. It would be well for all art lovers who wish to keep abreast with the
spirit of the times and to know what are the new movements in art, to visit this little display by
these young experimenters,these birdlings, who are trying their wings, which will be found weirdly
interesting. It may best be called a pathological art laboratory—an exhibit, as it were, of the vivi-
sectionists of modern art. Not that all the works shown can be characterized as productions of the
criminal insane or sketches by students of anatomy or makers of crazy-quilt designs. There are
some exhibits, notably those of Alfred Maurer, John Marin and Eduard Steichen, which are sane
and which, either in richness and riot of color and sunlight, or in delicacy of tone, are delightful.
But there are others, such as the productions of Max Weber, which can only have proceeded from
a close student of the “King in Yellow.” Over this remarkable display presides and preaches in a
most interesting way, the high priest, Alfred Stieglitz. It is understood that certain art writers and
critics have been affected by the show, as by an emetic, and that others have refused even to
mention it, but that a remnant, which came to scoff, has remained to pray.
Sadakichi Hartmann has written the following on this exhibition:
In several recent exhibitions I was astonished at the predominance of color. It furnished,
to me at least, the peculiar note of attraction. High-keyed tonalities are no longer unfamiliar to
us, they have been steadily on the increase ever since impressionism (i.e. representing form by color
without any drawn outline) gained a strong foothold in modern art appreciation. But many of
these paintings were not merely full sunlight effects but luminous harmonies or disharmonies—
just as you like—plus color, actual color.
In contemplating them one has not only the impression of stepping forth into the open, but to
be standing in the midst of a conflagration, amidst fires flaming up on all sides. We have lived for
47