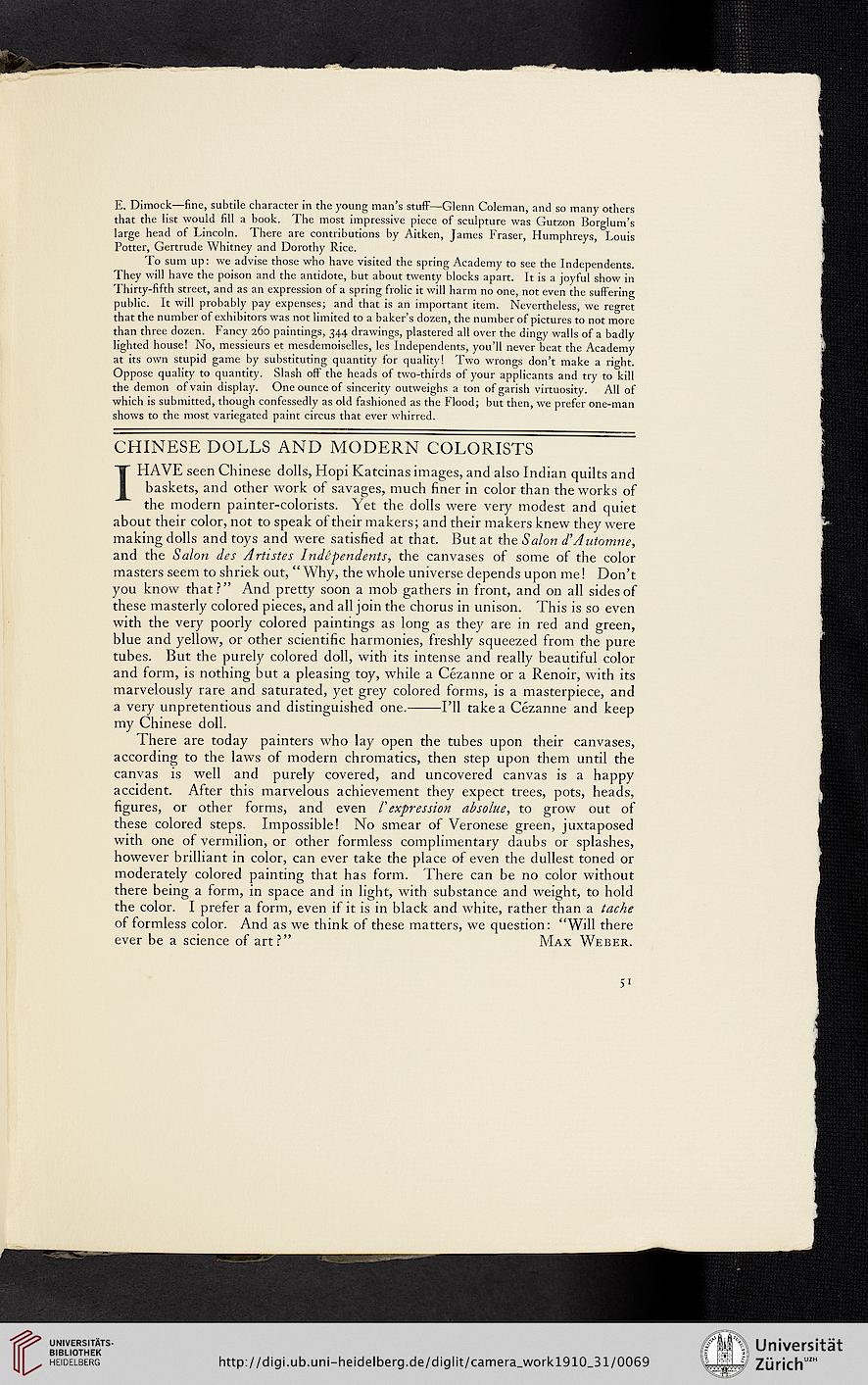 Information about OCR text
E. Dimock—fine, subtile character in the young man’s stuff—Glenn Coleman, and so many others
that the list would fill a book. The most impressive piece of sculpture was Gutzon Borglum’s
large head of Lincoln. There are contributions by Aitken, James Fraser, Humphreys, Louis
Potter, Gertrude Whitney and Dorothy Rice.
To sum up: we advise those who have visited the spring Academy to see the Independents.
They will have the poison and the antidote, but about twenty blocks apart. It is a joyful show in
Thirty-fifth street, and as an expression of a spring frolic it will harm no one, not even the suffering
public. It will probably pay expenses; and that is an important item. Nevertheless, we regret
that the number of exhibitors was not limited to a baker’s dozen, the number of pictures to not more
than three dozen. Fancy 260 paintings, 344 drawings, plastered all over the dingy walls of a badly
lighted house! No, messieurs et mesdemoiselles, les Independents, you’ll never beat the Academy
at its own stupid game by substituting quantity for quality! Two wrongs don’t make a right.
Oppose quality to quantity. Slash off the heads of two-thirds of your applicants and try to kill
the demon of vain display. One ounce of sincerity outweighs a ton of garish virtuosity. All of
which is submitted, though confessedly as old fashioned as the Flood; but then, we prefer one-man
shows to the most variegated paint circus that ever whirred.

CHINESE DOLLS AND MODERN COLORISTS
I HAVE seen Chinese dolls, Hopi Katcinas images, and also Indian quilts and
baskets, and other work of savages, much finer in color than the works of
the modern painter-colorists. Yet the dolls were very modest and quiet
about their color, not to speak of their makers; and their makers knew they were
making dolls and toys and were satisfied at that. But at the Salon d'Automne,
and the Salon des Artistes Indépendents, the canvases of some of the color
masters seem to shriek out, “ Why, the whole universe depends upon me! Don’t
you know that?” And pretty soon a mob gathers in front, and on all sides of
these masterly colored pieces, and all join the chorus in unison. This is so even
with the very poorly colored paintings as long as they are in red and green,
blue and yellow, or other scientific harmonies, freshly squeezed from the pure
tubes. But the purely colored doll, with its intense and really beautiful color
and form, is nothing but a pleasing toy, while a Cézanne or a Renoir, with its
marvelously rare and saturated, yet grey colored forms, is a masterpiece, and
a very unpretentious and distinguished one.―I´ll take a Cézanne and keep
my Chinese doll.
There are today painters who lay open the tubes upon their canvases,
according to the laws of modern chromatics, then step upon them until the
canvas is well and purely covered, and uncovered canvas is a happy
accident. After this marvelous achievement they expect trees, pots, heads,
figures, or other forms, and even l’expression absolue, to grow out of
these colored steps. Impossible! No smear of Veronese green, juxtaposed
with one of vermilion, or other formless complimentary daubs or splashes,
however brilliant in color, can ever take the place of even the dullest toned or
moderately colored painting that has form. There can be no color without
there being a form, in space and in light, with substance and weight, to hold
the color. I prefer a form, even if it is in black and white, rather than a tache
of formless color. And as we think of these matters, we question: “Will there
ever be a science of art?” Max Weber.