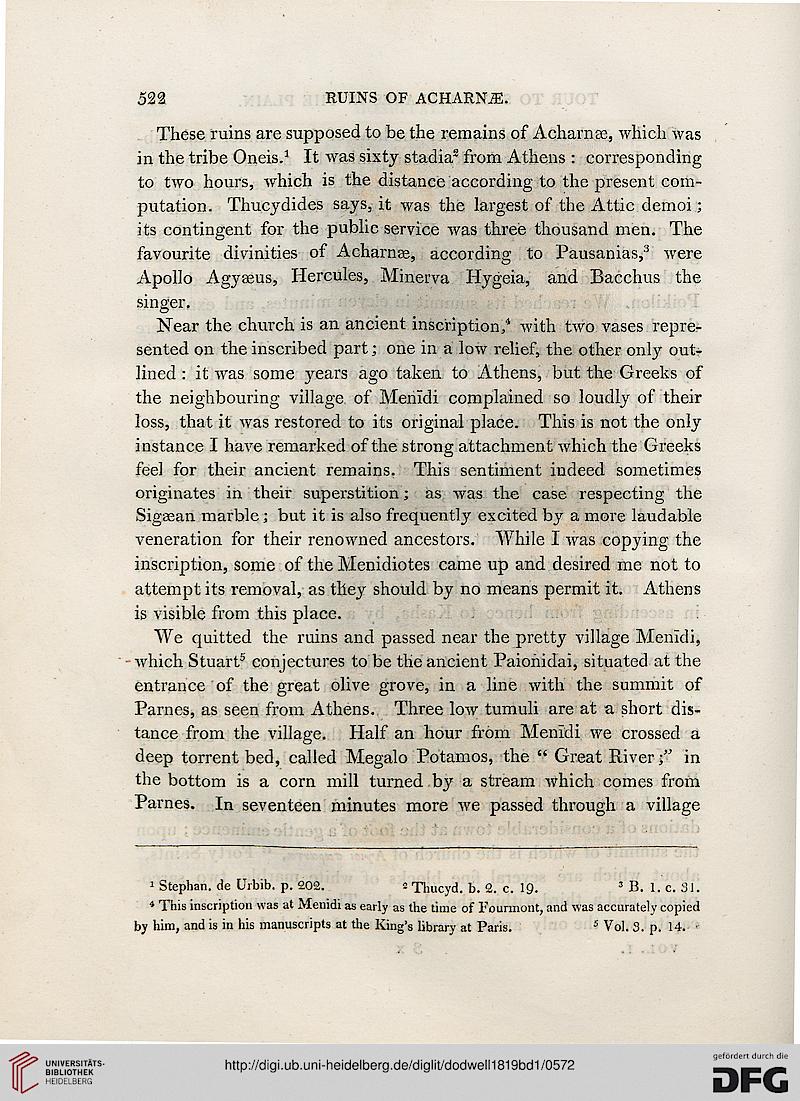 These ruins are supposed to be the remains of Acharnse, which was
in the tribe Oneis.1 It was sixty stadia8 from Athens : corresponding
to two hours, which is the distance according to the present com-
putation. Thucydides says, it was the largest of the Attic demoi;
its contingent for the public service was three thousand men. The
favourite divinities of Acharnae, according to Pausanias,3 were
Apollo Agyseus, Hercules, Minerva Hygeia, and Bacchus the
singer.

Near the church is an ancient inscription/ with two vases repre-
sented on the inscribed part; one in a low relief, the other only out-
lined : it was some years ago taken to Athens, but the Greeks of
the neighbouring village of Menidi complained so loudly of their
loss, that it was restored to its original place. This is not the only
instance I have remarked of the strong attachment which the Greeks
feel for their ancient remains. This sentiment indeed sometimes
originates in their superstition ] as was the case respecting the
Sigaean marble; but it is also frequently excited by a more laudable
veneration for their renowned ancestors. While I was copying the
inscription, some of the Menidiotes came up and desired me not to
attempt its removal, as they should by no means permit it. Athens
is visible from this place.

We quitted the ruins and passed near the pretty village Menidi,
which Stuart5 conjectures to be the ancient Paionidai, situated at the
entrance of the great olive grove, in a line with the summit of
Parnes, as seen from Athens. Three low tumuli are at a short dis-
tance from the village. Half an hour from Menidi we crossed a
deep torrent bed, called Megalo Potamos, the " Great River f in
the bottom is a corn mill turned by a stream Avhich comes from
Parnes. In seventeen minutes more we passed through a village

* This inscription was at Menidi as early as the time of Fourmont, and was accurately copied
by him, and is in his manuscripts at the King's library at Paris. 5 Vol. 3. p. 14.