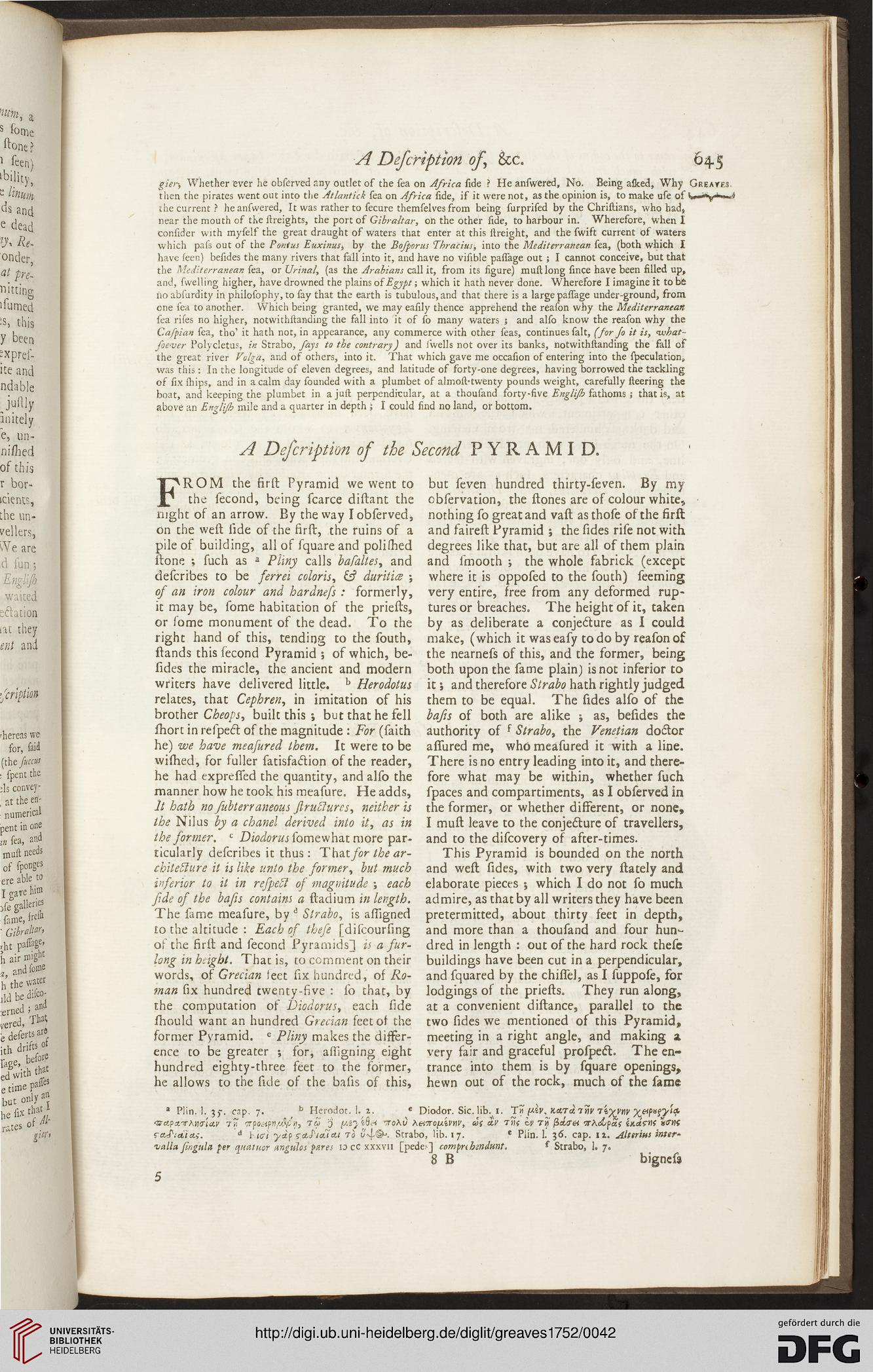 A Defcription of &c

gier; Whether "ever he observed any outlet of the sea on Asrica side ? He answered, No. Being assced, Why Greaves.
then the pirates went out into the Atlantick sea on Asrica side, if it were not, as the opinion is, to make use of'
the current ? he answered, It was rather to secure themselves from being surprised by the Christians, who had*
near the mouth of the slreights, the port of Gibraltar, on the other side, to harbour in. Wherefore, when I
consider with myself the great draught of waters that enter at this itreight, and the swift current of waters
which pass out of the Pontus Euxinus* by the Bosporus Thracius, into the Mediterranean sea, (both which I
have seen) besides the many rivers that fall into it, and have no visible passage out; I cannot conceive, but that
the Mediterranean sea, or Urinal, (as the Arabians call it, from its figure) mull long since have been filled up,
and, swelling higher, have drowned the plains of Egypt; which it hath never done. Wherefore I imagine it to be
no absurdity in philosophy, to say that the earth is tubulous, and that there is a large passage under-ground, from
cne sea to another. Which being granted, we may easily thence apprehend the reason why the Mediterranean
sea rises no higher, notwithstanding the fall into it of so many waters ; and also know the reason why the
Caspian sea, tho' it hath not, in appearance, any commerce with other seas, continues sait, (for Jo it is, ivbat-
foe'ver Polycletus, in Strabo, fays to the contrary) and J "wells not over its banks, notwithstanding the fall of
the great river Volga, and of others, into it. That which gave me occasion of entering into the {peculation,
was this: In the longitude of eleven degrees, and latitude of forty-one degrees, having borrowed the tackling
of six (hips, and in a calm day sounded with a plumbet of almosbtwenty pounds weight, carefully fleering the
boat, and keeping the plumbet in a just perpendicular, at a thousand forty-five Englijb fathoms j that is, at
above an EngUJh mile and a quarter in depth j I could find no land, or bottom.

A Defcription of the Second PYRAMID.

FROM the first Pyramid we went to
the second, being scarce distant the
night of an arrow. By the way I observedj
on the west lide of the first, the ruins of a
pile of building, all of square and polished
stone ; such as a Pliny calls bafaltes, and
describes to be ferret coloris, £5? duritice j
of an iron colour and hardness : formerly,
it may be, some habitation of the priests,
or some monument of the dead. To the
right hand of this, tending to the south,
stands this second Pyramid ; of which, be-
sides the miracle, the ancient and modern
writers have delivered little. b Herodotus
relates, that Cephren, in imitation of his
brother Cheops, built this ; but that he fell
short in respect of the magnitude : For (saith
he) we have meafured them. It were to be
wished, for fuller satisfaction of the reader,
he had expressed the quantity, and also the
manner how he took his measure. He adds,
It hath no fubterraneous jlrutlures, neither is
the Nil us by a chanel derived into it, as in
the former. c Diodorus somewhat more par-
ticularly describes it thus: That for the ar-
chitecture it is like unto the former, but much
inferior to it in respetl of magnitude ; each
side of the bafis contains a stadium in length.
The same measure, by d Strabo, is assigned
to the altitude : Each of thefe [difcoursing
of the first and second Pyramids] is a sur-
long in height. Thac is, to comment on their
words, of Grecian seet six hundred, of Ro-
man six hundred twenty-five : so that, by
the computation of Diodorus, each side
should want an hundred Grecian feet of the
former Pyramid. e Pliny makes the differ-
ence to be greater ; for, assigning eight
hundred eighty-three feet to the former,
he allows to the side of the basis of this,

but seven hundred thirty-seven. By my
observation, the stones are of colour white,
nothing so great and vast asthose of the first
and fairest Pyramid 5 the sides rise not with
degrees like that, but are all of them plain
and smooth •, the whole fabrick (except
where it is opposed to the south) seeming
very entire, free from any deformed rup-
tures or breaches. The height of it, taken
by as deliberate a conjecture as I could
make, (which it waseasy to do by reason of
the nearness of this, and the former, being
both upon the same plain) is not inferior to
it j and therefore Strabo hath rightly judged
them to be equal. The sides also of the
basis of both are alike ; as, besides the
authority of f Strabo, the Venetian doctor
assured me, who measured it with a line.
There is no entry leading into it, and there-
fore what may be within, whether such
spaces and compartiments, as I observed in
the former, or whether different, or none,
I must leave to the conjecture of travellers,
and to the discovery of after-times.
This Pyramid is bounded on the north
and west sides, with two very stately and
elaborate pieces ; which I do not so much
admire, as that by all writers they have been
pretermitted, about thirty feet in depth,
and more than a thousand and four hun-
dred in length : out of the hard rock these
buildings have been cut in a perpendicular,
and squared by the chissel, as I suppose, for
lodgings of the priests. They run along,
at a convenient distance, parallel to the
two sides we mentioned of this Pyramid,
meeting in a right angle, and making a
very fair and graceful prospect. The en-
trance into them is by square openings,
hewn out of the rock, much of the same