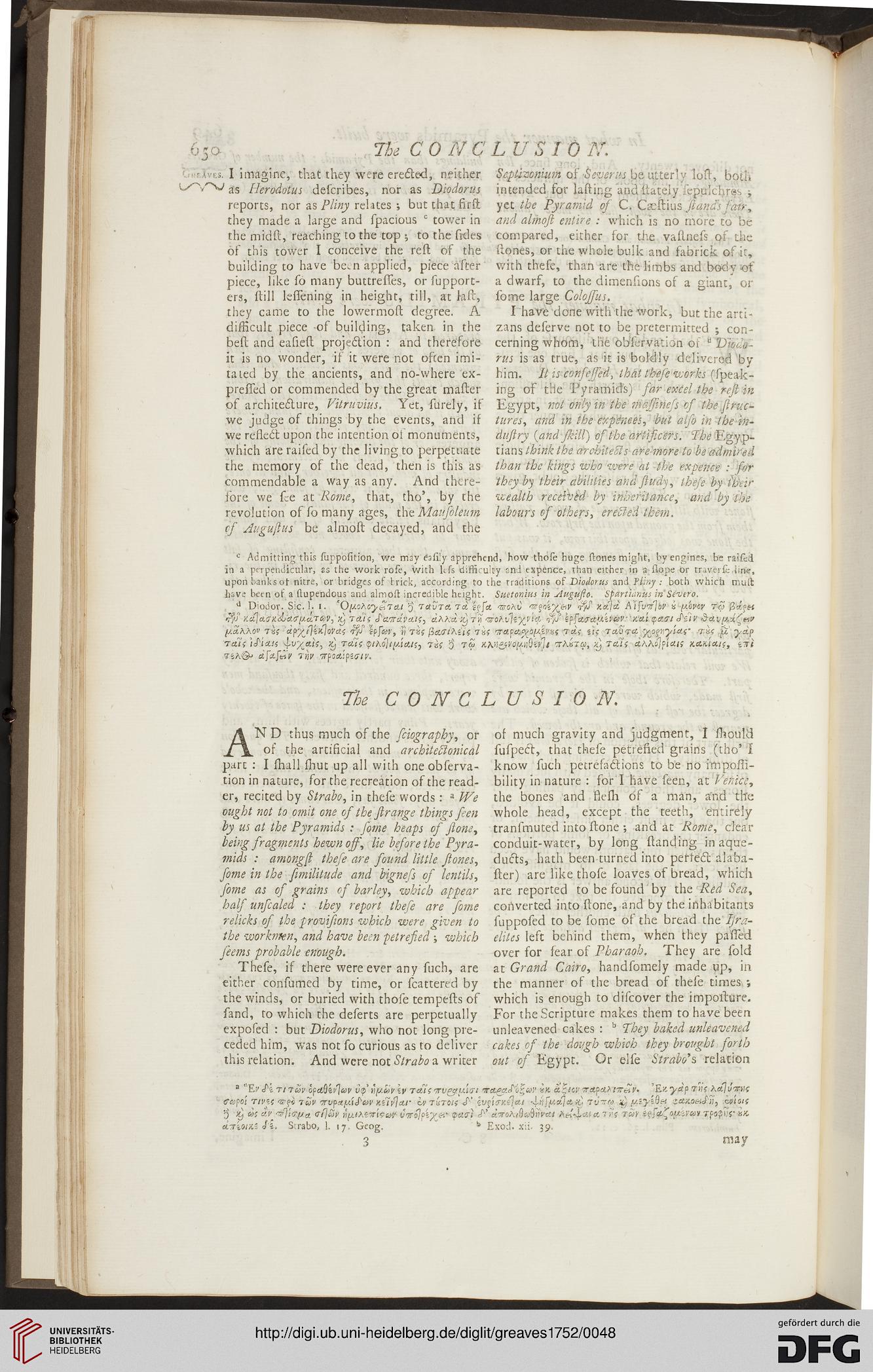 
• ■ tvEs. I Imagine, that they were erecte-d, neither
KS^Y^sj a-s £ierac[0tus describes, nor as Diodorus
reports, nor as Pliny relates •, but that first
they made a large and spacious c tower in
the midst, reaching to the top ; to the sides
of this tower I conceive the rest of the
building to have be^n applied, piece after
piece, like so many buttresTes, or support-
ers, (fill lessening in height, till, at kst,
they came to the lowermost degree. A
difficult piece -of building, taken in the
bed and easiest projection : and therefore
it is no wonder, if it were not often imi-
tated by the ancients, and no-where ex-
pressed or commended by the great matter
of architecture, Vitruvius. Yet, surely, if
we judge of things by the events, and if
we reflect upon the intention of monuments,
which are raised by the living to perpetuate
the memory of the dead, then is this as
commendable a way as any. And there-
sore we see at Rome, that, tho', by the
revolution of so many ages, the Man/oleum
cf Auguftus be almost decayed, and the

Scpthionium of -Seven's be, utterly loll, boi..
intended for lasting anditateiy iepulchras ;
yet the Pyramid of C. Cscstius fiand's sair,
and almoft entire : which is no more to be
compared, either for the vastness os the
(tones, or the whole bulk and fabrick of it,
with thefe, than are the limbs and body ^t
a dwarf, to the dimensions os a giant, or
some large Colosfus.
I have done with the work, but the arti-
zans deserve not to be pretermitted ; con-
cerning whom, the obicrvation os a Diodo-
rus is as true, as it is boldly delivered by
him. // is confesfed, that thefe works (spea-k-
ing of the Pyramids) far excel the reft in
Egypt, not only in the ma/pnefs of the ft rue-
Hiresi and in the expences, but aifo in the in-
duftry {and/kill) of the artisicers. The Egyp-
tians think the architects are more to be admired
than the kings who were at the expence : sor
they by their abilities and study, these by their
wealth received by inheritance, and by ike
labours of others, erecled them.

AN D thus much of the biography, or
of the artificial and ar chit eel onical
part : I mall shut up all with oneobserva-
tion in nature, for the recreation of the read-
er, recited by Strabo, in these words: a We
ought not to omit one of'the'. ft range things feen
by us at the Pyramids : fome heaps of ftone,
being fragments hewn off, lie before the Pyra-
mids : amongft thefe are found little ftones,
fome in the fimilitude and bigness of lentils,
fome as of grains of barley, which appear
half unfcaled : they report thefe are fome
relicks of the provi/wns which were given to
the workmen, and have been petrefied ; which
feems probable enough.
These, if there were ever any such, are
either consumed by time, or scattered by
the winds, or buried with those tempests of
sand, to which the deserts are perpetually
exposed : but Diodorus, who not long pre-
ceded him, was not so curious as to deliver
this relation. And were not Strabo a writer

of much gravity and judgment, I shouUl
suspect, that these petrefied grains (tho' I
know such petresactions to be no rmpossi-
bility in nature : for I have seen, at Venice,
the bones and fiesh of a man, and the
whole head, except the teeth, entirely
transmuted into stone ; and at Rome, clear
conduit-water, by long Handing in aque-
ducts, hath been turned into perfect alaba-
ster) are like those loaves of bread, which
are reported to be found by the Red Sea,
converted into stone, and by the inhabitants
supposed to be some of the bread the Ijra-
elites left behind them, when they passed
over for fear of Pharaoh. They are sold
at Grand Cairo, handsomely made up, in
the manner of the bread of these times *,
which is enough to discover the impolture.
For the Scripture makes them to have been
unleavened cakes : b They baked unleavened
cakes of the dough which they brought forth
out of Egypt. Or else Strabo's relation