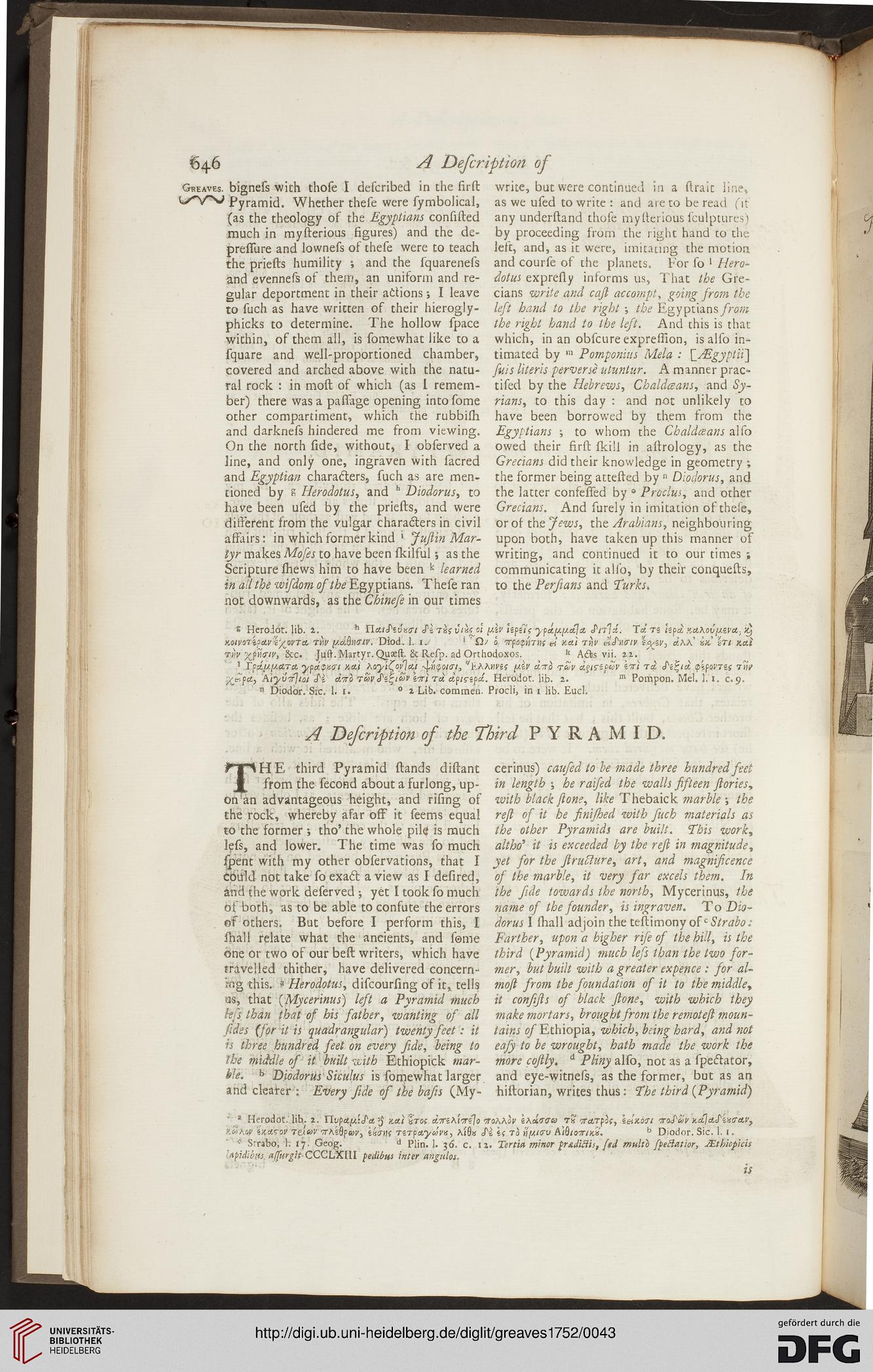 Greaves, bigness with those I described in the first write, but were continued in a (trait line,
<*/"W Pyramid. Whether these were symbolical, as we used to write : and are to be read (if
(as the theology of the Egyptians consided any understand those mysterioussculptures)
much in mysterious figures) and the de- by proceeding from the right hand to the
pressure and lowness of these were to teach htt, and, as it were, imitating the motion
the priests humility ; and the squareness and course of the planets. For so ' Hero-
and evenness of them, an uniform and re- dot us expresly informs us, That the Gre~
gular deportment in their actions; I leave cians write and caft accompt, going from the
to such as have written of their hierogly- left hand to the right ; the Egyptians from
phicks to determine. The hollow space the right hand to the left. And this is that.
within, of them all, is somewhat like to a which, in an obscureexpression, isalso in
square and well-proportioned chamber,
covered and arched above with the natu-
ral rock : in molt of which (as I remem-
ber) there was a passage opening into some
other compartiment, which the rubbish
and darkness hindered me from viewing.

timated by m Pomponius Mela : \_Mgyptii\
fiiis Uteris perverse utuntur. A manner prac^-
tised by the Hebrews, Chaldaans, and Sy-
rians, to this day : and not unlikely to
have been borrowed by them from the
Egyptians -, to whom the Chaldeans also

On the north side, without, I observed a owed their first {kill in altrology, as the
line, and only one, ingraven with sacred Grecians did their knowledge in geometry ;
and Egyptian characters, such as are men- the former being attested by n Diodorus, and
tioned by 8 Herodotus, and h Diodorus, to the latter confessed by ° Produs, and other
have been used by the priests, and were Grecians. And surely in imitation of these,

different from the vulgar characters in civil
affairs: in which former kind * J ujlin Mar-
tyr makes Mofes to have been skilful; as the
Scripture shews him to have been k learned
in all the wisdom of the Egyptians. These ran to the Perfians and Turks.
not downwards, as the Chinefe in our times

or of thsjews, the Arabians, neighbouring
upon both, have taken up this manner of
writing, and continued it to our times ;
communicating it also, by their conquests,

A Defcription of the "Third PYRAMID,


THE third Pyramid stands distant
from the second about a furlong, up-
on an advantageous height, and rising os
the rock, whereby afar off it seems equal
to the former ; tho' the whole pile is much
less, and lower. The time was so much
spent with my other observations, that I
could not take so exact a view as I desired,
and the work deserved % yet I took so much
of both, as to be able to confute the errors
of others, But before I perform this, I
ihall relate what the ancients, and seme
one or two of our best writers, which have
travelled thither, have delivered concern-
log this. a Herodotus, discoursing of it,, tells
us, that [Mycerinus) left a Pyramid much
kss; than that of his father, wanting of all
fides (sor it is quadrangular) twenty feet: it
is three hundred seet on every fide, being to
the middle of it built with Ethiopick mar-
ble. h Diodorus1 Siculus is somewhat larger
and clearer : Every fide of the basts (My-

cerinus) caufed to be made three hundred feet
in length ; he raifed the walls sifteen ftories,
with black, fione, like Thebaick marble ; the
rest of it he sinished with fuch materials as
the other Pyramids are built. This work,
altho' it is exceeded by the reft in magnitude,
yet for the sirutlure, art, and magnisicence
of the marble, it very sar excels them. In
the fide towards the north, Mycerinus, the
name of the founder, is ingraven. To Dio-
dorus I shall adjoin the testimony of cStrabo:
Farther, upon a higher rise of the hill, is the
third {Pyramid) much less than the two for-
mer, but built with a greater expence : for aU
moft from the foundation of it to the middle,
it consists of black flone, with which they
make mortars, brought srom the remotefl moun-
tains of Ethiopia, which, being hard, and not
easy to be wrought, hath made the work the
more coftly, d Pliny also, not as a spectator,
and eye-witness, as the former, but as an
historian, writes thus: The third {Pyramid)