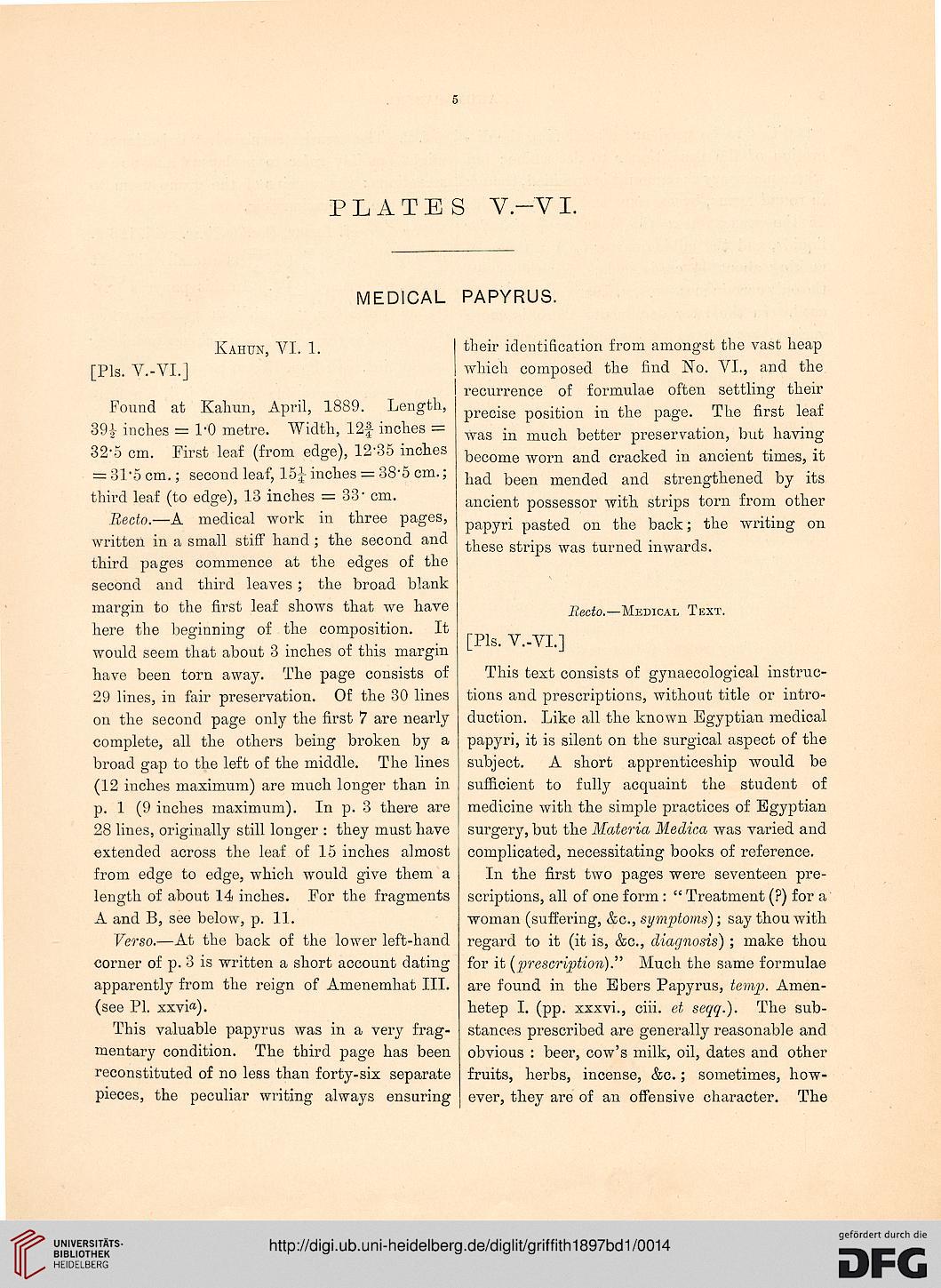 Recto.—A medical work in three pages,
written in a small stiff hand ; the second and
third pages commence at the edges of the
second and third leaves ; the broad blank
margin to the first leaf shows that we have
here the beginning of the composition. It
would seem that about 3 inches of this margin
have been torn away. The page consists of
29 lines, in fair preservation. Of the 30 lines
on the second page only the first 7 are nearly
complete, all the others being broken by a
broad gap to the left of the middle. The lines
(12 inches maximum) are much longer than in
p. 1 (9 inches maximum). In p. 3 there are
28 lines, originally still longer : they must have
extended across the leaf of 15 inches almost
from edge to edge, which would give them a
length of about 14 inches. For the fragments
A and B, see below, p. 11.

Verso.—At the back of the lower left-hand
corner of p. 3 is written a short account dating
apparently from the reign of Amenemhat III.
(see PI. xxvia).

This valuable papyrus was in a very frag-
mentary condition. The third page has been
reconstituted of no less than forty-six separate
pieces, the peculiar writing always ensuring

their identification from amongst the vast heap
which composed the find No. VI., and the
recurrence of formulae often settling their
precise position in the page. The first leaf
was in much better preservation, but having
become worn and cracked in ancient times, it
had been mended and strengthened by its
ancient possessor with strips torn from other
papyri pasted on the back; the writing on
these strips was turned inwards.

This text consists of gynaecological instruc-
tions and prescriptions, without title or intro-
duction. Like all the known Egyptian medical
papyri, it is silent on the surgical aspect of the
subject. A short apprenticeship would be
sufficient to fully acquaint the student of
medicine with the simple practices of Egyptian
surgery, but the Materia Medica was varied and
complicated, necessitating books of reference.

In the first two pages were seventeen pre-
scriptions, all of one form: " Treatment (?) for a
woman (suffering, &c, symptoms); say thou with
regard to it (it is, &c, diagnosis) ; make thou
for it (prescription)." Much the same formulae
are found in the Ebers Papyrus, temp. Amen-
hetep I. (pp. xxxvi., ciii. et seqq.). The sub-
stances prescribed are generally reasonable and
obvious : beer, cow's milk, oil, dates and other
fruits, herbs, incense, &c.; sometimes, how-
ever, they are of an offensive character. The