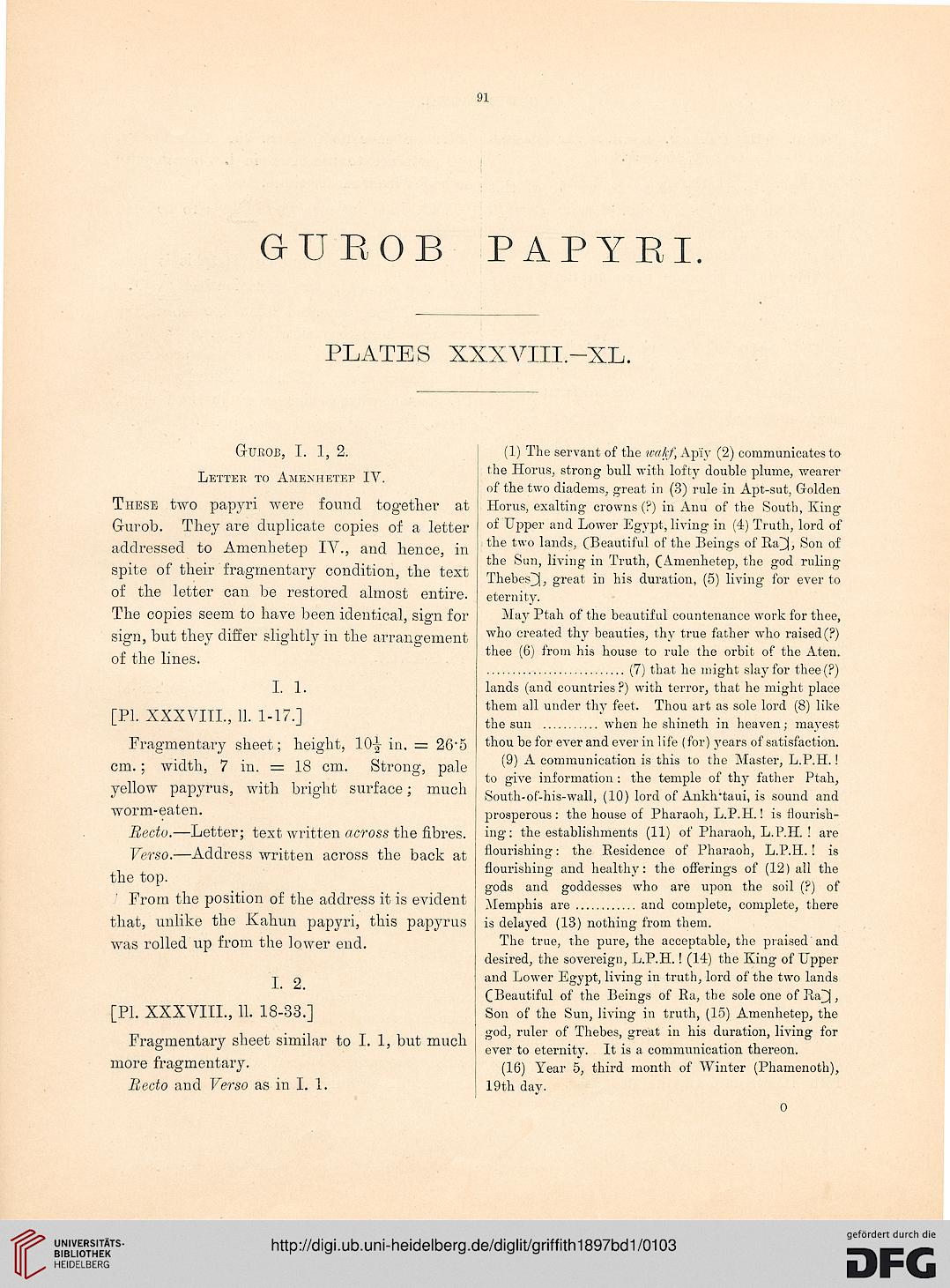 These two papyri were found together at
Grurob. They are duplicate copies of a letter
addressed to Amenhetep IV., and hence, in
spite of their fragmentary condition, the text
of the letter can be restored almost entire.
The copies seem to have been identical, sign for
sign, but they differ slightly in the arrangement
of the lines.

Recto.—Letter; text written across the fibres.

Verso.—Address written across the back at
the top.

From the position of the address it is evident
that, unlike the Kahun papyri, this papyrus
was rolled up from the lower end.

Fragmentary sheet similar to I. 1, but much
more fragmentary.

(1) The servant of the wakf, Ap'iy (2) communicates to
the Horus, strong bull with lofty double plume, wearer
of the two diadems, great in (3) rule in Apt-sut, Golden
Horus, exalting crowns (?) in Anu of the South, King
of Upper and Lower Egypt, living in (4) Truth, lord of
the two lands, (Beautiful of the Beings of Ra^|, Son of
the Sun, living in Truth, (Amenhetep, the god ruling
Thebes]^, great in his duration, (5) living for ever to
eternity.

May Ptah of the beautiful countenance work for thee,
who created thy beauties, thy true father who raised (?)
thee (6) from his house to rule the orbit of the Aten.

lands (and countries ?) with terror, that he might place
them all under thy feet. Thou art as sole lord (8) like

thou be for ever and ever in life (for) years of satisfaction.

is delayed (13) nothing from them.

The true, the pure, the acceptable, the praised and
desired, the sovereign, L.P.H.! (14) the King of Upper
and Lower Egypt, living in truth, lord of the two lands
CBeautiful of the Beings of Ra, the sole one of Ra^,
Son of the Sun, living in truth, (15) Amenhetep, the
god, ruler of Thebes, great in his duration, living for
ever to eternity. It is a communication thereon.