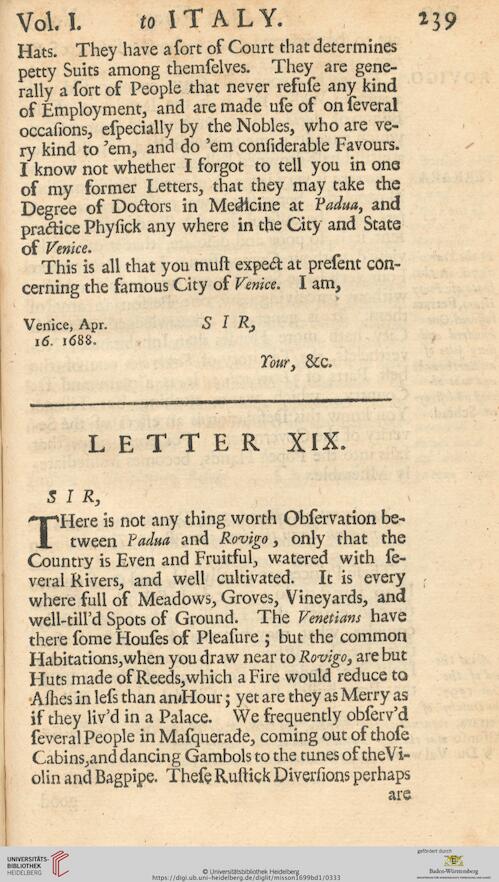 Information about OCR text
Vol. I. to ITALY. 239
Hats. They have a sort of Court that determines
petty Suits among themselves. They are gene-
rally a sort of People that never refuse any kind
os Employment, and are made use of on several
occasions, especially by the Nobles, who are ve-
ry kind to ’em, and do ’em considerable Favours.
I know not whether I forgot to tell you in one
os my former Letters, that they may take the
Degree of Doctors in Medicine at Padua, and
practice Physick any where in the City and State
os Venice.
This is all that you must expert at present con-
cerning the famous City of Venice. I am,
>
Venice, Apr. SIR.
16. 1688.
Tour, &c.

LETTER XIX.
5 I R,
THere is not any thing worth Observation be-
tween Fadua and Rovigo, only that the
Country is Even and Fruitful, watered with se-
veral Rivers, and well cultivated. It is every
where full os Meadows, Groves, Vineyards, and
well-till’d Spots of Ground. The Venetians have
there some Houses of Pleasure ; but the common
Habitations,when you draw near to Rowigo, are but
Huts made of Reeds,which a Fire would reduce to
Allies in less than amHour; yet are they as Merry as
if they liv’d in a Palace. We frequently observ’d
several People in Masquerade, coming out of those
Cabins,and dancing Gambols to the tunes of theVi-
olin and Bagpipe. These Rustick Diversions perhaps
are