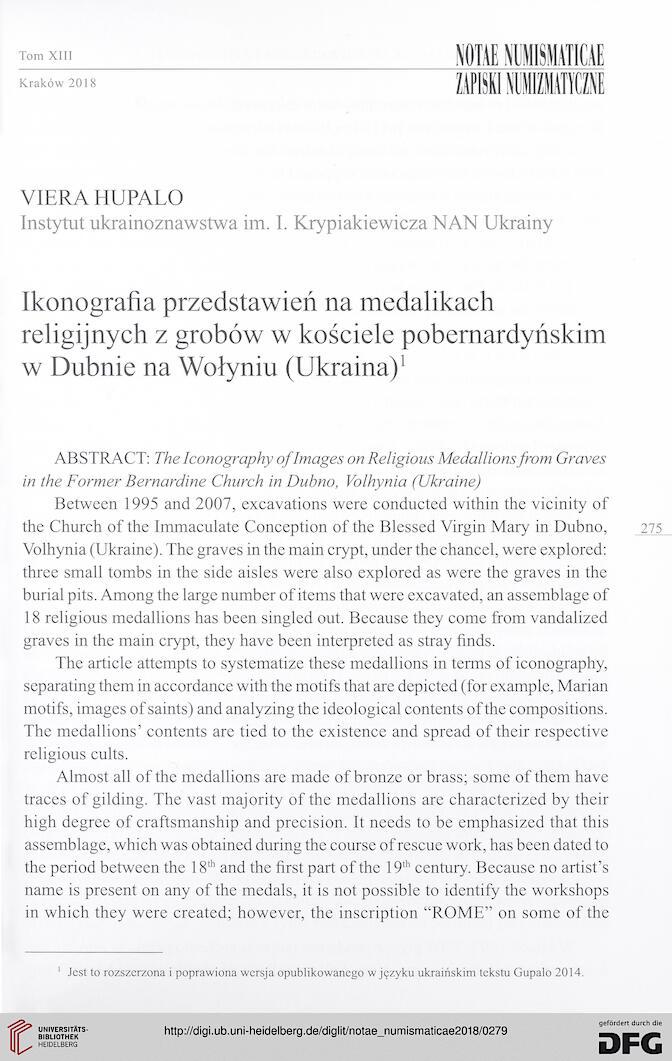 ABSTRACT: The Iconography of Images on Religious Medallions from Graves
in the Former Bernardine Church in Dubno, Volhynia (Ukraine)
Between 1995 and 2007, excavations were conducted within the vicinity of
the Church of the Immaculate Conception of the Blessed Virgin Mary in Dubno, 275
Volhynia (Ukraine). The graves in the main crypt, under the chancel, were explored:
three small tombs in the side aisles were also explored as were the graves in the
burial pits. Among the large number of items that were excavated, an assemblage of
18 religious medallions has been singled out. Because they come from vandalized
graves in the main crypt, they have been interpreted as stray finds.
The article attempts to systematize these medallions in terms of iconography,
separating them in accordance with the motifs that are depicted (for example, Marian
motifs, images of saints) and analyzing the ideological contents of the compositions.
The medallions’ contents are tied to the existence and spread of their respective
religious cults.
Almost all of the medallions are made of bronze or brass; some of them have
traces of gilding. The vast majority of the medallions are characterized by their
high degree of craftsmanship and precision. It needs to be emphasized that this
assemblage, which was obtained during the course of rescue work, has been dated to
the period between the 18th and the first part of the 19th century. Because no artist’s
name is present on any of the medals, it is not possible to identify the workshops
in which they were created; however, the inscription “ROME” on some of the