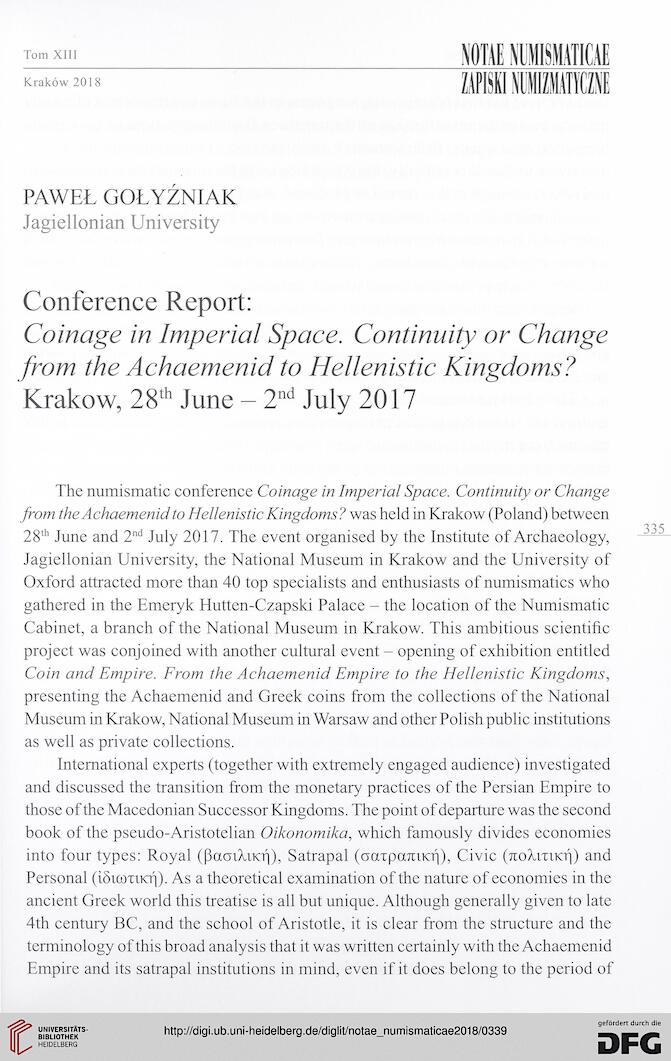 PAWEŁ GOŁYŹNIAK
Jagiellonian University
Conference Report:
Coinage in Imperial Space. Continuity or Change
from the Achaemenid to Hellenistic Kingdoms?
Krakow, 28th June - 2nd July 2017
The numismatic conference Coinage in Imperial Space. Continuity or Change
from the Achaemenid to Hellenistic Kingdoms? was held in Krakow (Poland) between
28th June and 2nd July 2017. The event organised by the Institute of Archaeology,
Jagiellonian University, the National Museum in Krakow and the University of
Oxford attracted more than 40 top specialists and enthusiasts of numismatics who
gathered in the Emeryk Hutten-Czapski Palace - the location of the Numismatic
Cabinet, a branch of the National Museum in Krakow. This ambitious scientific
project was conjoined with another cultural event - opening of exhibition entitled
Coin and Empire. From the Achaemenid Empire to the Hellenistic Kingdoms,
presenting the Achaemenid and Greek coins from the collections of the National
Museum in Krakow, National Museum in Warsaw and other Polish public institutions
as well as private collections.
International experts (together with extremely engaged audience) investigated
and discussed the transition from the monetary practices of the Persian Empire to
those of the Macedonian Successor Kingdoms. The point of departure was the second
book of the pseudo-Aristotelian Oikonomika, which famously divides economies
into four types: Royal (ßaoikiKf]), Satrapal (oarpa7iiKf|), Civic (ttoWtikt]) and
Personal (ibicoTiKij). As a theoretical examination of the nature of economies in the
ancient Greek world this treatise is all but unique. Although generally given to late
4th century BC, and the school of Aristotle, it is clear from the structure and the
terminology of this broad analysis that it was written certainly with the Achaemenid
Empire and its satrapal institutions in mind, even if it does belong to the period of