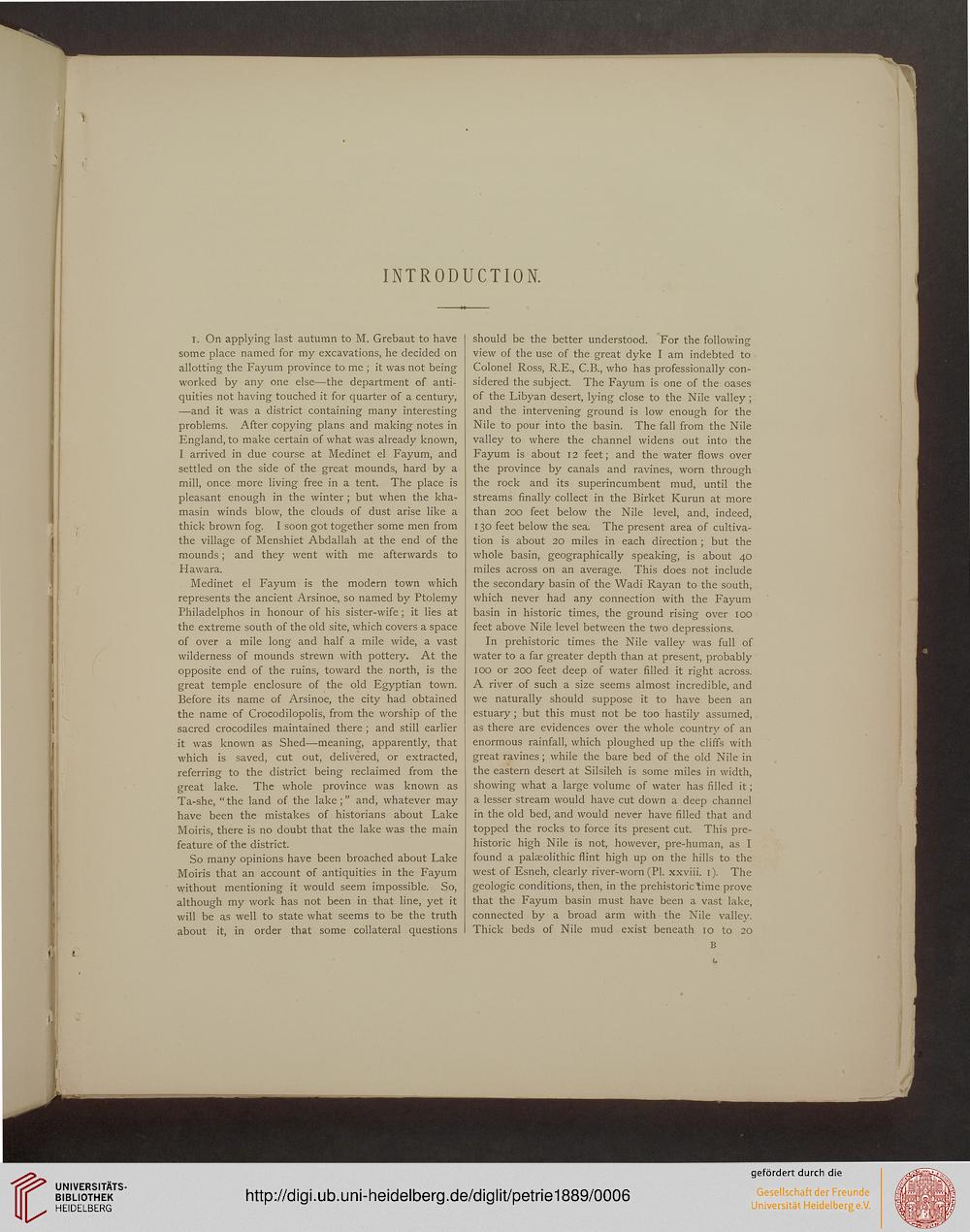 I. On applying last autumn to M. Grebaut to have
some place named for my excavations, he decided on
allotting the Fayum province to me ; it was not being
worked by any one else—the department of anti-
quities not having touched it for quarter of a century,
—and it was a district containing many interesting
problems. After copying plans and making notes in
England, to make certain of what was already known,
I arrived in due course at Medinet el Fayum, and
settled on the side of the great mounds, hard by a
mill, once more living free in a tent. The place is
pleasant enough in the winter ; but when the kha-
masin winds blow, the clouds of dust arise like a
thick brown fog. I soon got together some men from
the village of Menshiet Abdallah at the end of the
mounds; and they went with me afterwards to
Hawara.

Medinet el Fayum is the modern town which
represents the ancient Arsinoe, so named by Ptolemy
Philadelphos in honour of his sister-wife; it lies at
the extreme south of the old site, which covers a space
of over a mile long and half a mile wide, a vast
wilderness of mounds strewn with pottery. At the
opposite end of the ruins, toward the north, is the
great temple enclosure of the old Egyptian town.
Before its name of Arsinoe, the city had obtained
the name of Crocodilopolis, from the worship of the
sacred crocodiles maintained there ; and still earlier
it was known as Shed—meaning, apparently, that
which is saved, cut out, delivered, or extracted,
referring to the district being reclaimed from the
great lake. The whole province was known as
Ta-she, " the land of the lake ;" and, whatever may
have been the mistakes of historians about Lake
Moiris, there is no doubt that the lake was the main
feature of the district.

So many opinions have been broached about Lake
Moiris that an account of antiquities in the Fayum
without mentioning it would seem impossible. So,
although my work has not been in that line, yet it
will be as well to state what seems to be the truth
about it, in order that some collateral questions

should be the better understood. For the following
view of the use of the great dyke I am indebted to
Colonel Ross, R.E., C.B., who has professionally con-
sidered the subject. The Fayum is one of the oases
of the Libyan desert, lying close to the Nile valley;
and the intervening ground is low enough for the
Nile to pour into the basin. The fall from the Nile
valley to where the channel widens out into the
Fayum is about 12 feet; and the water flows over
the province by canals and ravines, worn through
the rock and its superincumbent mud, until the
streams finally collect in the Birket Kurun at more
than 200 feet below the Nile level, and, indeed,
130 feet below the sea. The present area of cultiva-
tion is about 20 miles in each direction ; but the
whole basin, geographically speaking, is about 40
miles across on an average. This does not include
the secondary basin of the Wadi Rayan to the south,
which never had any connection with the Fayum
basin in historic times, the ground rising over 100
feet above Nile level between the two depressions.

In prehistoric times the Nile valley was full of
water to a far greater depth than at present, probably
100 or 200 feet deep of water filled it right across.
A river of such a size seems almost incredible, and
we naturally should suppose it to have been an
estuary; but this must not be too hastily assumed,
as there are evidences over the whole country of an
enormous rainfall, which ploughed up the cliffs with
great ravines ; while the bare bed of the old Nile in
the eastern desert at Silsileh is some miles in width,
showing what a large volume of water has filled it;
a lesser stream would have cut down a deep channel
in the old bed, and would never have filled that and
topped the rocks to force its present cut. This pre-
historic high Nile is not, however, pre-human, as I
found a palaeolithic flint high up on the hills to the
west of Esneh, clearly river-worn (PI. xxviii. 1). The
geologic conditions, then, in the prehistoric time prove
that the Fayum basin must have been a vast lake,
connected by a broad arm with the Nile valley.
Thick beds of Nile mud exist beneath 10 to 20