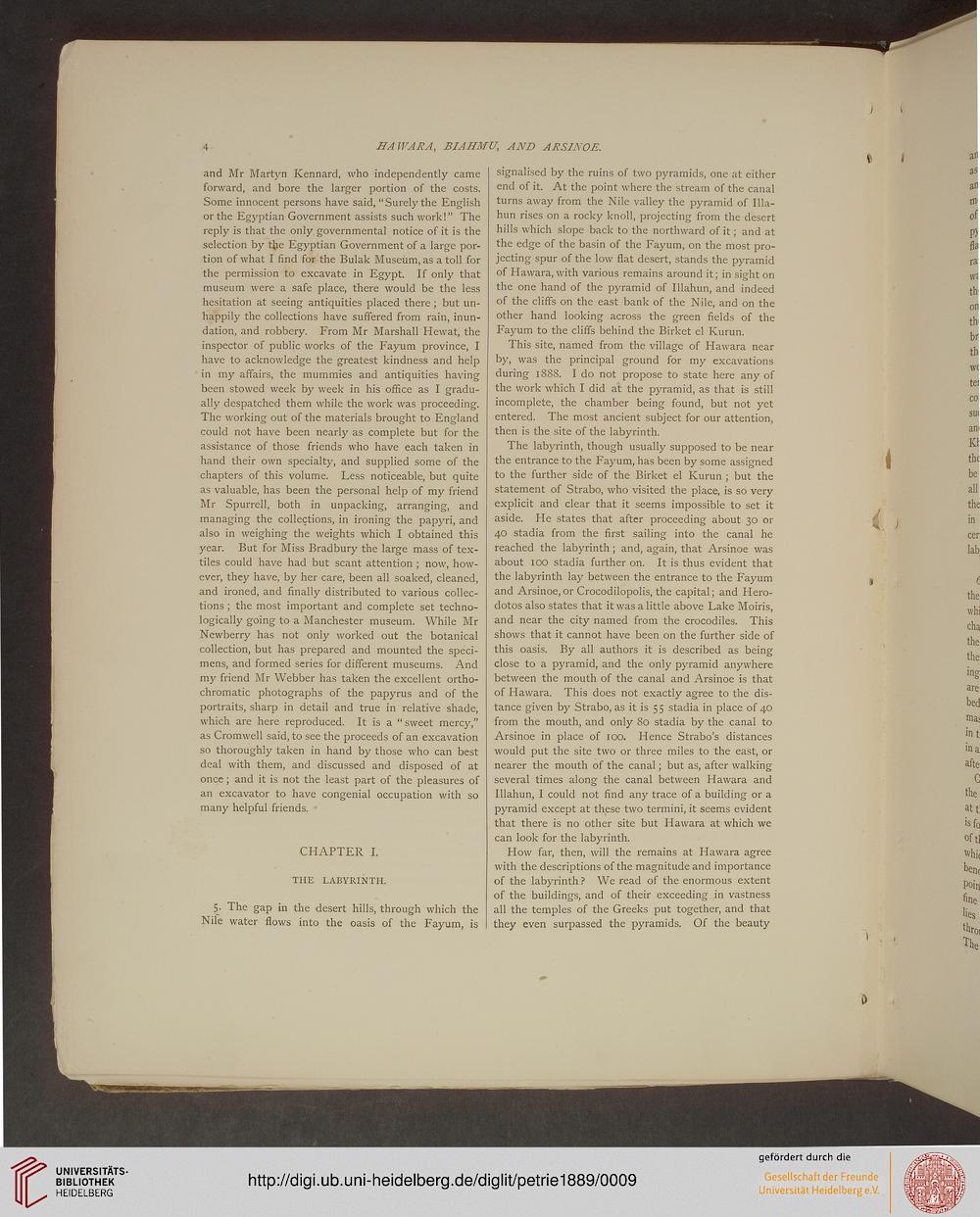 and Mr Martyn Kennard, who independently came
forward, and bore the larger portion of the costs.
Some innocent persons have said, "Surely the English
or the Egyptian Government assists such work!" The
reply is that the only governmental notice of it is the
selection by the Egyptian Government of a large por-
tion of what I find for the Bulak Museum, as a toll for
the permission to excavate in Egypt. If only that
museum were a safe place, there would be the less
hesitation at seeing antiquities placed there ; but un-
happily the collections have suffered from rain, inun-
dation, and robbery. From Mr Marshall Hewat, the
inspector of public works of the Fayum province, I
have to acknowledge the greatest kindness and help
in my affairs, the mummies and antiquities having
been stowed week by week in his office as I gradu-
ally despatched them while the work was proceeding.
The working out of the materials brought to England
could not have been nearly as complete but for the
assistance of those friends who have each taken in
hand their own specialty, and supplied some of the
chapters of this volume. Less noticeable, but quite
as valuable, has been the personal help of my friend
Mr Spurrell, both in unpacking, arranging, and
managing the collections, in ironing the papyri, and
also in weighing the weights which I obtained this
year. But for Miss Bradbury the large mass of tex-
tiles could have had but scant attention ; now, how-
ever, they have, by her care, been all soaked, cleaned,
and ironed, and finally distributed to various collec-
tions ; the most important and complete set techno-
logically going to a Manchester museum. While Mr
Newberry has not only worked out the botanical
collection, but has prepared and mounted the speci-
mens, and formed series for different museums. And
my friend Mr Webber has taken the excellent ortho-
chromatic photographs of the papyrus and of the
portraits, sharp in detail and true in relative shade,
which are here reproduced. It is a " sweet mercy,"
as Cromwell said, to see the proceeds of an excavation
so thoroughly taken in hand by those who can best
deal with them, and discussed and disposed of at
once; and it is not the least part of the pleasures of
an excavator to have congenial occupation with so
many helpful friends.

5. The gap in the desert hills, through which the
Nile water flows into the oasis of the Fayum, is

signalised by the ruins of two pyramids, one at either
end of it. At the point where the stream of the canal
turns away from the Nile valley the pyramid of Illa-
hun rises on a rocky knoll, projecting from the desert
hills which slope back to the northward of it; and at
the edge of the basin of the Fayum, on the most pro-
jecting spur of the low flat desert, stands the pyramid
of Hawara, with various remains around it; in sight on
the one hand of the pyramid of Illahun, and indeed
of the cliffs on the east bank of the Nile, and on the
other hand looking across the green fields of the
Fayum to the cliffs behind the Birket el Kurun.

This site, named from the village of Hawara near
by, was the principal ground for my excavations
during 1888. I do not propose to state here any of
the work which I did at the pyramid, as that is still
incomplete, the chamber being found, but not yet
entered. The most ancient subject for our attention,
then is the site of the labyrinth.

The labyrinth, though usually supposed to be near
the entrance to the Fayum, has been by some assigned
to the further side of the Birket el Kurun ; but the
statement of Strabo, who visited the place, is so very
explicit and clear that it seems impossible to set it
aside. He states that after proceeding about 30 or
40 stadia from the first sailing into the canal he
reached the labyrinth; and, again, that Arsinoe was
about 100 stadia further on. It is thus evident that
the labyrinth lay between the entrance to the Fayum
and Arsinoe, or Crocodilopolis, the capital; and Hero-
dotos also states that it was a little above Lake Moiris,
and near the city named from the crocodiles. This
shows that it cannot have been on the further side of
this oasis. By all authors it is described as being
close to a pyramid, and the only pyramid anywhere
between the mouth of the canal and Arsinoe is that
of Hawara. This does not exactly agree to the dis-
tance given by Strabo, as it is 55 stadia in place of 40
from the mouth, and only 80 stadia by the canal to
Arsinoe in place of 100. Hence Strabo's distances
would put the site two or three miles to the east, or
nearer the mouth of the canal; but as, after walking
several times along the canal between Hawara and
Illahun, I could not find any trace of a building or a
pyramid except at these two termini, it seems evident
that there is no other site but Hawara at which we
can look for the labyrinth.

How far, then, will the remains at Hawara agree
with the descriptions of the magnitude and importance
of the labyrinth ? We read of the enormous extent
of the buildings, and of their exceeding in vastness
all the temples of the Greeks put together, and that
they even surpassed the pyramids. Of the beauty