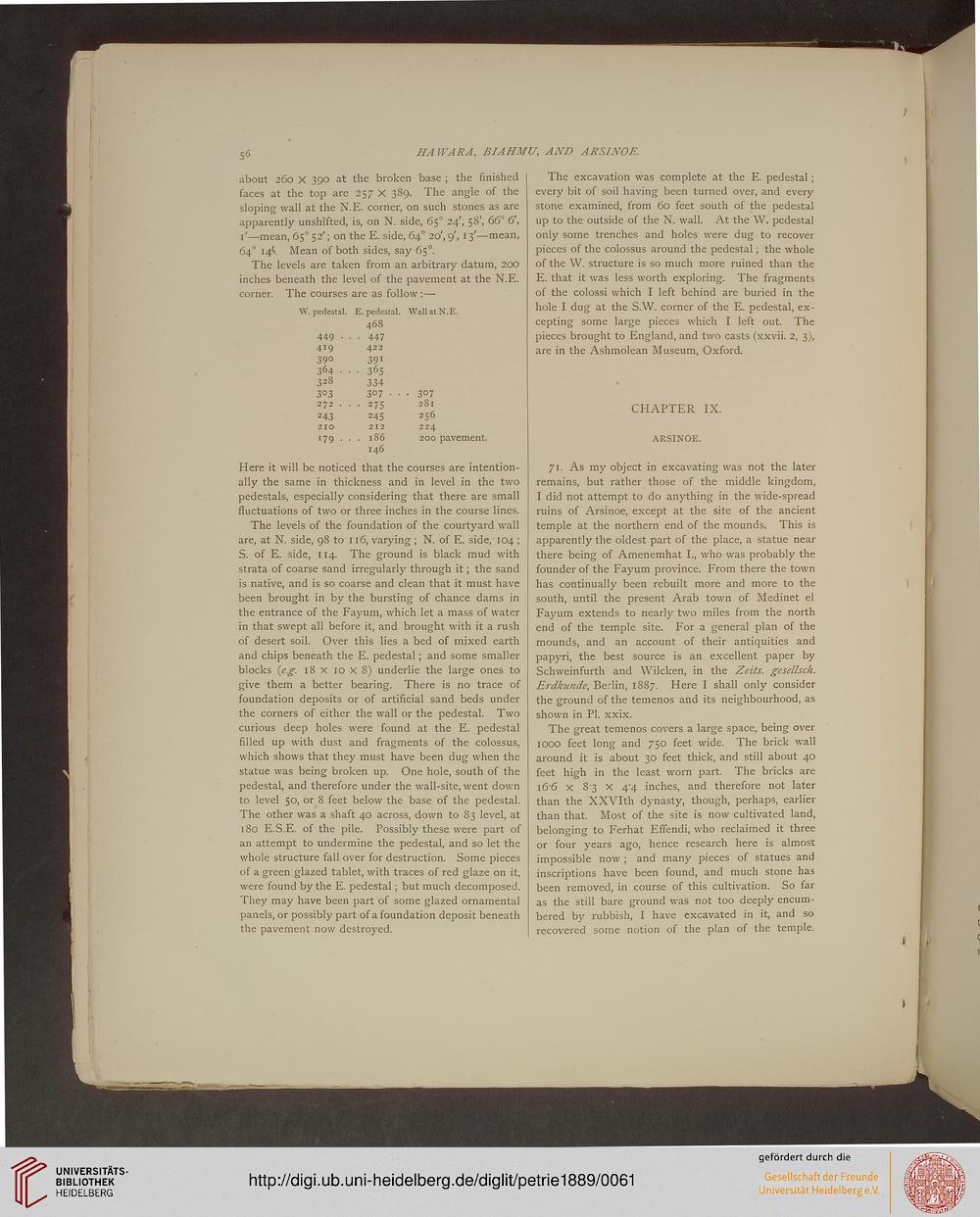 HA WAR A, BIAHMU, AND ARSINOE.

The levels are taken from an arbitrary datum, 200
inches beneath the level of the pavement at the N.E.
corner. The courses are as follow :—■

Here it will be noticed that the courses are intention-
ally the same in thickness and in level in the two
pedestals, especially considering that there are small
fluctuations of two or three inches in the course lines.
The levels of the foundation of the courtyard wall
are, at N. side, 98 to 116, varying ; N. of E. side, 104 ;
S. of E. side, 114. The ground is black mud with
strata of coarse sand irregularly through it; the sand
is native, and is so coarse and clean that it must have
been brought in by the bursting of chance dams in
the entrance of the Fayum, which let a mass of water
in that swept all before it, and brought with it a rush
of desert soil. Over this lies a bed of mixed earth
and chips beneath the E. pedestal; and some smaller
blocks {e.g. 18 X 10 X 8) underlie the large ones to
give them a better bearing. There is no trace of
foundation deposits or of artificial sand beds under
the corners of either the wall or the pedestal. Two
curious deep holes were found at the E. pedestal
filled up with dust and fragments of the colossus,
which shows that they must have been dug when the
statue was being broken up. One hole, south of the
pedestal, and therefore under the wall-site, went down
to level 50, or 8 feet below the base of the pedestal.
The other was a shaft 40 across, down to 83 level, at
180 E.S.E. of the pile. Possibly these were part of
an attempt to undermine the pedestal, and so let the
whole structure fall over for destruction. Some pieces
of a green glazed tablet, with traces of red glaze on it,
were found by the E. pedestal; but much decomposed.
They may have been part of some glazed ornamental
panels, or possibly part of a foundation deposit beneath
the pavement now destroyed.

The excavation was complete at the E. pedestal ;
every bit of soil having been turned over, and every
stone examined, from 60 feet south of the pedestal
up to the outside of the N. wall. At the W. pedestal
only some trenches and holes were dug to recover
pieces of the colossus around the pedestal; the whole
of the W. structure is so much more ruined than the
E. that it was less worth exploring. The fragments
of the colossi which I left behind are buried in the
hole I dug at the S.W. corner of the E. pedestal, ex-
cepting some large pieces which I left out. The
pieces brought to England, and two casts (xxvii. 2, 3),
are in the Ashmolean Museum, Oxford.

71. As my object in excavating was not the later
remains, but rather those of the middle kingdom,
I did not attempt to do anything in the wide-spread
ruins of Arsinoe, except at the site of the ancient
temple at the northern end of the mounds. This is
apparently the oldest part of the place, a statue near
there being of Amenemhat I., who was probably the
founder of the Fayum province. From there the town
has continually been rebuilt more and more to the
south, until the present Arab town of Medinet el
Fayum extends to nearly two miles from the north
end of the temple site. For a general plan of the
mounds, and an account of their antiquities and
papyri, the best source is an excellent paper by
Schweinfurth and Wilcken, in the Zeits. gesellsch.
Erdkunde, Berlin, 1887. Here I shall only consider
the ground of the temenos and its neighbourhood, as
shown in PI. xxix.

The great temenos covers a large space, being over
IOOO feet long and 750 feet wide. The brick wall
around it is about 30 feet thick, and still about 40
feet high in the least worn part. The bricks are
l6'6 χ 8'3 X 4'4 inches, and therefore not later
than the XXVIth dynasty, though, perhaps, earlier
than that. Most of the site is now cultivated land,
belonging to Ferhat Effendi, who reclaimed it three
or four years ago, hence research here is almost
impossible now ; and many pieces of statues and
inscriptions have been found, and much stone has
been removed, in course of this cultivation. So far
as the still bare ground was not too deeply encum-
bered by rubbish, I have excavated in it, and so
recovered some notion of the plan of the temple.