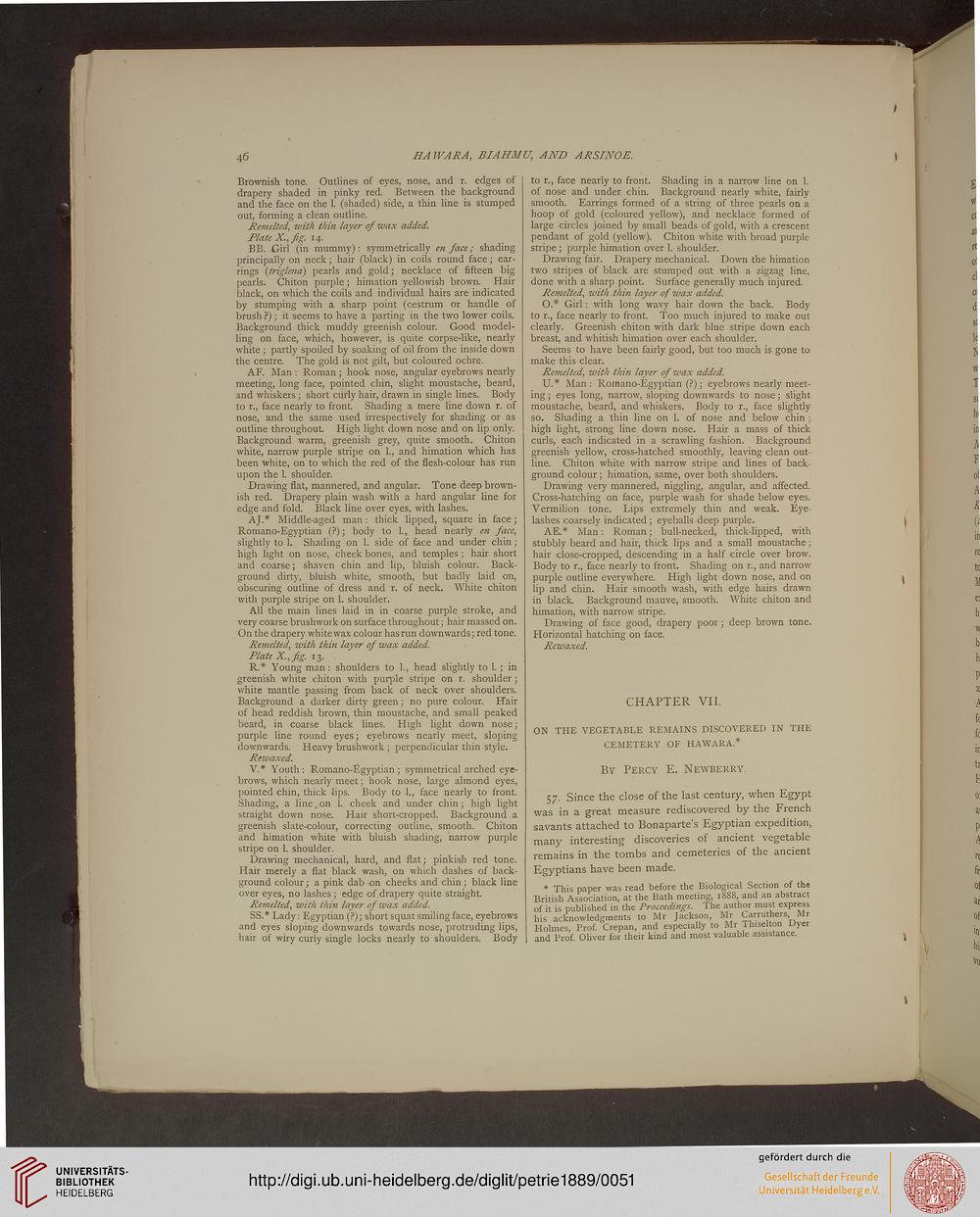 Brownish tone. Outlines of eyes, nose, and r. edges of
drapery shaded in pinky red. Between the background
and the face on the 1. (shaded) side, a thin line is stumped
out, forming a clean outline.

BB. Girl (in mummy): symmetrically en face; shading
principally on neck; hair (black) in coils round face; ear-
rings (triglena) pearls and gold; necklace of fifteen big
pearls. Chiton purple; himation yellowish brown. Hair
black, on which the coils and individual hairs are indicated
by stumping with a sharp point (cestrum or handle of
brush ?); it seems to have a parting in the two lower coils.
Background thick muddy greenish colour. Good model-
ling on face, which, however, is quite corpse-like, nearly
white; partly spoiled by soaking of oil from the inside down
the centre. The gold is not gilt, but coloured ochre.

AF. Man : Roman ; hook nose, angular eyebrows nearly
meeting, long face, pointed chin, slight moustache, beard,
and whiskers; short curly hair, drawn in single lines. Body
to r., face nearly to front. Shading a mere line down r. of
nose, and the same used irrespectively for shading or as
outline throughout High light down nose and on lip only.
Background warm, greenish grey, quite smooth. Chiton
white, narrow purple stripe on 1., and himation which has
been white, on to which the red of the flesh-colour has run
upon the 1. shoulder.

All the main lines laid in in coarse purple stroke, and
very coarse brushwork on surface throughout; hair massed on.
On the drapery white wax colour has run downwards; red tone.

Drawing mechanical, hard, and flat; pinkish red tone.
Hair merely a flat black wash, on which dashes of back-
ground colour; a pink dab on cheeks and chin; black line
over eyes, no lashes; edge of drapery quite straight.

to r., face nearly to front. Shading in a narrow line on 1.
of nose and under chin. Background nearly white, fairly
smooth. Earrings formed of a string of three pearls on a
hoop of gold (coloured yellow), and necklace formed of
large circles joined by small beads of gold, with a crescent
pendant of gold (yellow). Chiton white with broad purple
stripe; purple himation over 1. shoulder.

Drawing fair. Drapery mechanical. Down the himation
two stripes of black are stumped out with a zigzag line,
done with a sharp point. Surface generally much injured.

O.* Girl: with long wavy hair down the back. Body
to r., face nearly to front. Too much injured to make out
clearly. Greenish chiton with dark blue stripe down each
breast, and whitish himation over each shoulder.

Seems to have been fairly good, but too much is gone to
make this clear.

ON THE VEGETABLE REMAINS DISCOVERED IN THE

57. Since the close of the last century, when Egypt

was in a great measure rediscovered by the French

many interesting discoveries of ancient vegetable

remains in the tombs and cemeteries of the ancient

Egyptians have been made.

* This paper was read before the Biological Section of the
British Association, at the Bath meeting, 1888, and an abstract
of it is published in the Proceedings. The author must express
his acknowledgments to Mr Jackson, Mr Carruthers, Mr
Holmes, Prof. Crepan, and especially to Mr Thiselton Dyer
and Prof Oliver for their kind and most valuable assistance.