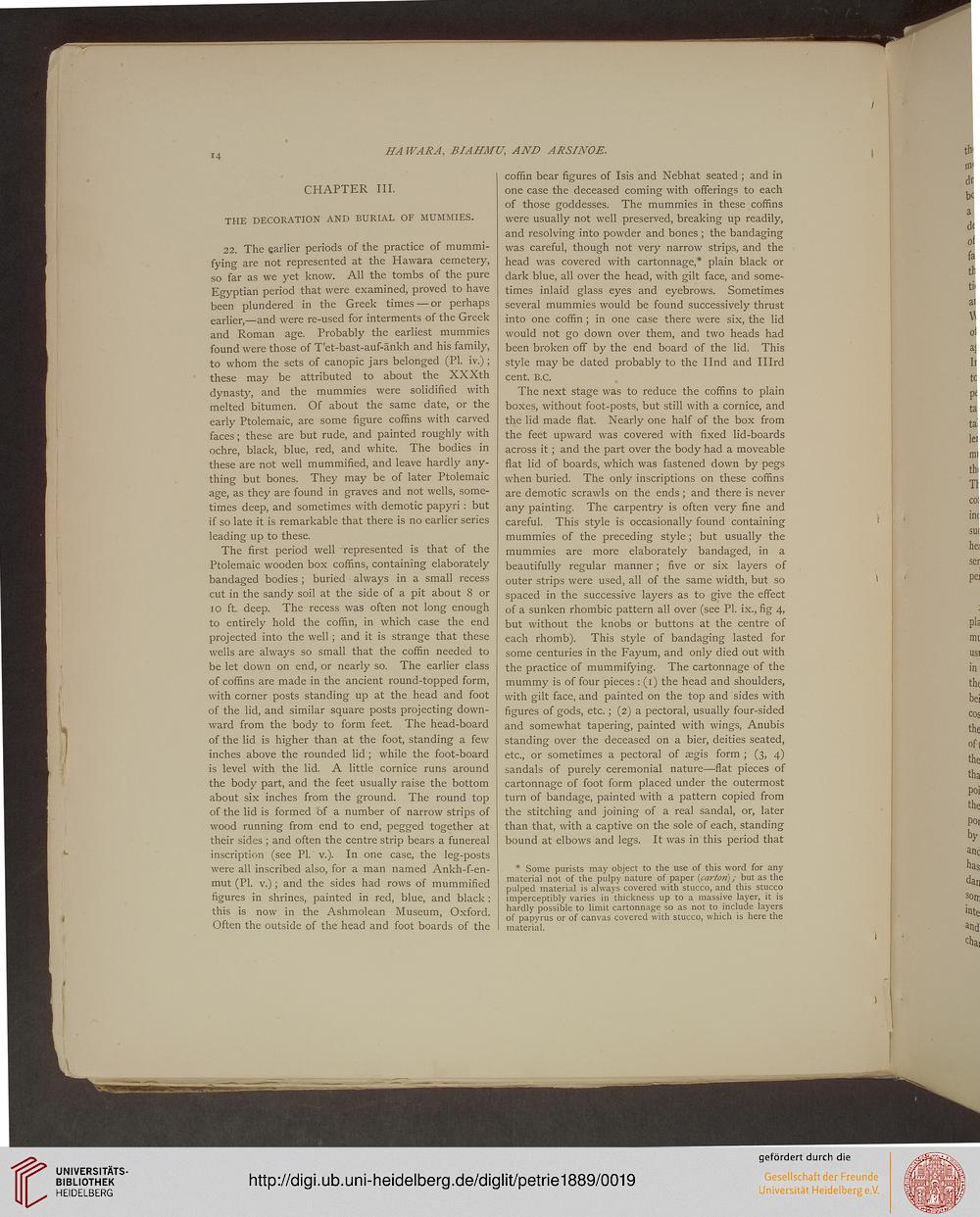 THE DECORATION AND BURIAL OF MUMMIES.

22. The earlier periods of the practice of mummi-
fying are not represented at the Hawara cemetery,
so far as we yet know. All the tombs of the pure
Egyptian period that were examined, proved to have
been plundered in the Greek times — or perhaps
earlier,—and were re-used for interments of the Greek
and Roman age. Probably the earliest mummies
found were those of T'et-bast-auf-ankh and his family,
to whom the sets of canopic jars belonged (PI. iv.);
these may be attributed to about the XXXth
dynasty, and the mummies were solidified with
melted bitumen. Of about the same date, or the
early Ptolemaic, are some figure coffins with carved
faces; these are but rude, and painted roughly with
ochre, black, blue, red, and white. The bodies in
these are not well mummified, and leave hardly any-
thing but bones. They may be of later Ptolemaic
age, as they are found in graves and not wells, some-
times deep, and sometimes with demotic papyri : but
if so late it is remarkable that there is no earlier series
leading up to these.

The first period well represented is that of the
Ptolemaic wooden box coffins, containing elaborately
bandaged bodies ; buried always in a small recess
cut in the sandy soil at the side of a pit about 8 or
io ft. deep. The recess was often not long enough
to entirely hold the coffin, in which case the end
projected into the well; and it is strange that these
wells are always so small that the coffin needed to
be let down on end, or nearly so. The earlier class
of coffins are made in the ancient round-topped form,
with corner posts standing up at the head and foot
of the lid, and similar square posts projecting down-
ward from the body to form feet. The head-board
of the lid is higher than at the foot, standing a few
inches above the rounded lid ; while the foot-board
is level with the lid. A little cornice runs around
the body part, and the feet usually raise the bottom
about six inches from the ground. The round top
of the lid is formed of a number of narrow strips of
wood running from end to end, pegged together at
their sides ; and often the centre strip bears a funereal
inscription (see PI. v.). In one case, the leg-posts
were all inscribed also, for a man named Ankh-f-en-
mut (PL v.); and the sides had rows of mummified
figures in shrines, painted in red, blue, and black :
this is now in the Ashmolean Museum, Oxford.
Often the outside of the head and foot boards of the

coffin bear figures of Isis and Nebhat seated ; and in
one case the deceased coming with offerings to each
of those goddesses. The mummies in these coffins
were usually not well preserved, breaking up readily,
and resolving into powder and bones ; the bandaging
was careful, though not very narrow strips, and the
head was covered with cartonnage,* plain black or
dark blue, all over the head, with gilt face, and some-
times inlaid glass eyes and eyebrows. Sometimes
several mummies would be found successively thrust
into one coffin ; in one case there were six, the lid
would not go down over them, and two heads had
been broken off by the end board of the lid. This
style may be dated probably to the Ilnd and Illrd
cent. B.C.

The next stage was to reduce the coffins to plain
boxes, without foot-posts, but still with a cornice, and
the lid made flat. Nearly one half of the box from
the feet upward was covered with fixed lid-boards
across it; and the part over the body had a moveable
flat lid of boards, which was fastened down by pegs
when buried. The only inscriptions on these coffins
are demotic scrawls on the ends ; and there is never
any painting. The carpentry is often very fine and
careful. This style is occasionally found containing
mummies of the preceding style; but usually the
mummies are more elaborately bandaged, in a
beautifully regular manner; five or six layers of
outer strips were used, all of the same width, but so
spaced in the successive layers as to give the effect
of a sunken rhombic pattern all over (see PI. ix., fig 4,
but without the knobs or buttons at the centre of
each rhomb). This style of bandaging lasted for
some centuries in the Fayum, and only died out with
the practice of mummifying. The cartonnage of the
mummy is of four pieces : (i) the head and shoulders,
with gilt face, and painted on the top and sides with
figures of gods, etc.; (2) a pectoral, usually four-sided
and somewhat tapering, painted with wings, Anubis
standing over the deceased on a bier, deities seated,
etc., or sometimes a pectoral of asgis form ; (3, 4)
sandals of purely ceremonial nature—flat pieces of
cartonnage of foot form placed under the outermost
turn of bandage, painted with a pattern copied from
the stitching and joining of a real sandal, or, later
than that, with a captive on the sole of each, standing
bound at elbows and legs. It was in this period that

* Some purists may object to the use of this word for any
material not of the pulpy nature of paper {carton); but as the
pulped material is always covered with stucco, and this stucco
imperceptibly varies in thickness up to a massive layer, it is
hardly possible to limit cartonnage so as not to include layers
of papyrus or of canvas covered with stucco, which is here the
material.