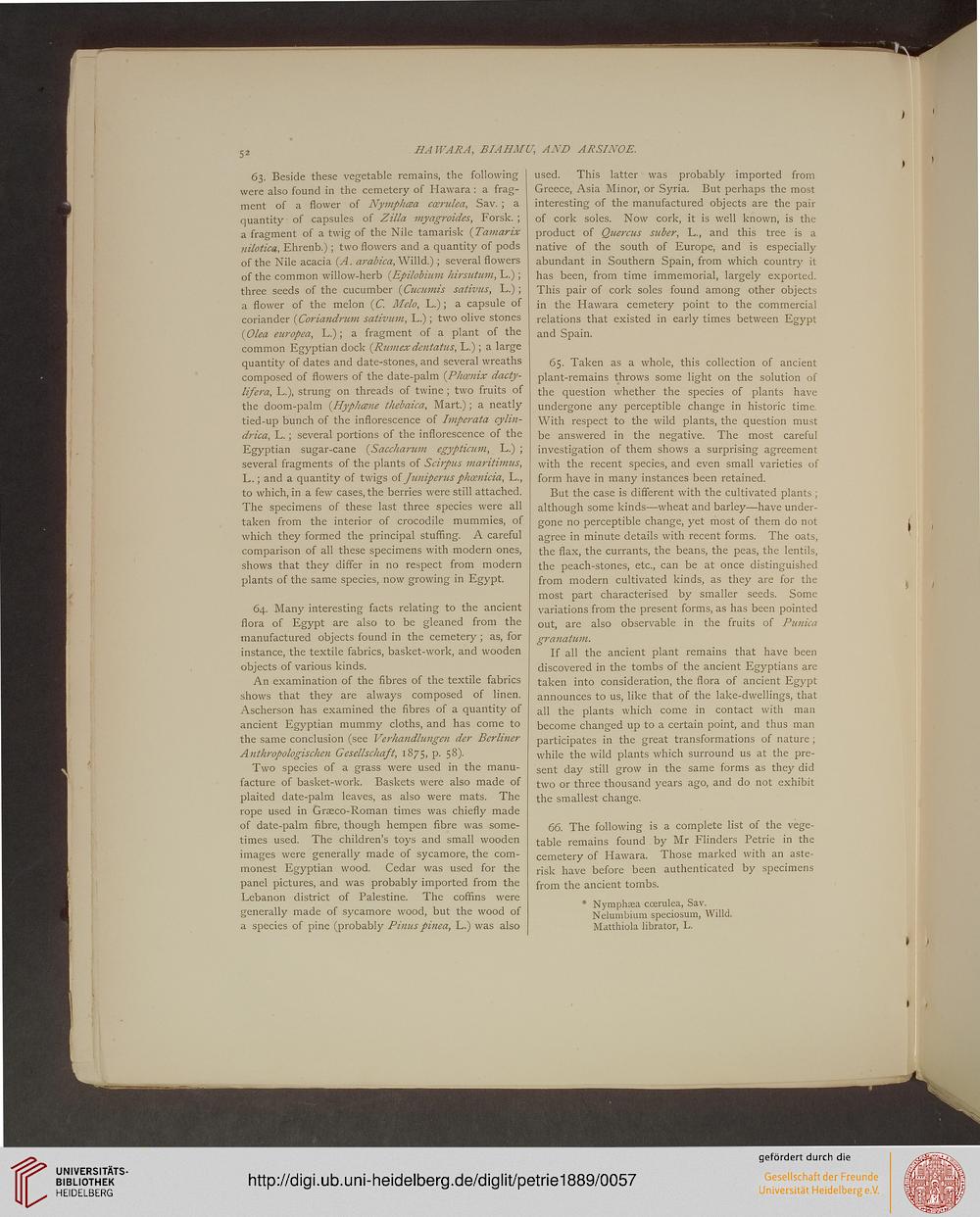 63. Beside these vegetable remains, the following
were also found in the cemetery of Hawara : a frag-
ment of a flower of Nymphcea cceridea, Sav. ; a
quantity of capsules of Zilla myagroides, Forsk. ;
a fragment of a twig of the Nile tamarisk {Tamarix
nilotica, Ehrenb.) ; two flowers and a quantity of pods
of the Nile acacia (A. arabiea^illd.); several flowers
of the common willow-herb (Epilobium hirsutum, L.);
three seeds of the cucumber (Cucumis sativus, L.);
a flower of the melon (C. Melo, L.); a capsule of
coriander (Coriandnim sativum, L.) ; two olive stones
{Olea europea, L.); a fragment of a plant of the
common Egyptian dock {Rnmexdentatus; L.) ; a large
quantity of dates and date-stones, and several wreaths
composed of flowers of the date-palm {Phcenix dacty-
lifera, L.), strung on threads of twine ; two fruits of
the doom-palm {Hyphcene thebaica, Mart.); a neatly
tied-up bunch of the inflorescence of Imperata cylin-
drica, L.; several portions of the inflorescence of the
Egyptian sugar-cane {Saccharum egypticam, L.) ;
several fragments of the plants of Scirpus maritimus,
L.; and a quantity of twigs of JrmipenisPhoenicia, L.,
to which, in a few cases, the berries were still attached.
The specimens of these last three species were all
taken from the interior of crocodile mummies, of
which they formed the principal stuffing. A careful
comparison of all these specimens with modern ones,
shows that they differ in no respect from modern
plants of the same species, now growing in Egypt.

64. Many interesting facts relating to the ancient
flora of Egypt are also to be gleaned from the
manufactured objects found in the cemetery ; as, for
instance, the textile fabrics, basket-work, and wooden
objects of various kinds.

An examination of the fibres of the textile fabrics
shows that they are always composed of linen.
Ascherson has examined the fibres of a quantity of
ancient Egyptian mummy cloths, and has come to
the same conclusion (see Verhandlungen der Berliner
Anthropologischen Gesellscliaft, 1875, p. 58).

Two species of a grass were used in the manu-
facture of basket-work. Baskets were also made of
plaited date-palm leaves, as also were mats. The
rope used in Graeco-Roman times was chiefly made
of date-palm fibre, though hempen fibre was some-
times used. The children's toys and small wooden
images were generally made of sycamore, the com-
monest Egyptian wood. Cedar was used for the
panel pictures, and was probably imported from the
Lebanon district of Palestine. The coffins were
generally made of sycamore wood, but the wood of
a species of pine (probably Pimis pinea, L.) was also

used. This latter was probably imported from
Greece, Asia Minor, or Syria. But perhaps the most
interesting of the manufactured objects are the pair
of cork soles. Now cork, it is well known, is the
product of Quercus suber, L., and this tree is a
native of the south of Europe, and is especially
abundant in Southern Spain, from which country it
has been, from time immemorial, largely exported.
This pair of cork soles found among other objects
in the Hawara cemetery point to the commercial
relations that existed in early times between Egypt
and Spain.

65. Taken as a whole, this collection of ancient
plant-remains throws some light on the solution of
the question whether the species of plants have
undergone any perceptible change in historic time.
With respect to the wild plants, the question must
be answered in the negative. The most careful
investigation of them shows a surprising agreement
with the recent species, and even small varieties of
form have in many instances been retained.

But the case is different with the cultivated plants ;
although some kinds—wheat and barley—have under-
gone no perceptible change, yet most of them do not
agree in minute details with recent forms. The oats,
the flax, the currants, the beans, the peas, the lentils,
the peach-stones, etc., can be at once distinguished
from modern cultivated kinds, as they are for the
most part characterised by smaller seeds. Some
variations from the present forms, as has been pointed
out, are also observable in the fruits of Punica
granatum.

If all the ancient plant remains that have been
discovered in the tombs of the ancient Egyptians are
taken into consideration, the flora of ancient Egypt
announces to us, like that of the lake-dwellings, that
all the plants which come in contact with man
become changed up to a certain point, and thus man
participates in the great transformations of nature ;
while the wild plants which surround us at the pre-
sent day still grow in the same forms as they did
two or three thousand years ago, and do not exhibit
the smallest change.

66. The following is a complete list of the vege-
table remains found by Mr Flinders Petrie in the
cemetery of Hawara. Those marked with an aste-
risk have before been authenticated by specimens
from the ancient tombs.