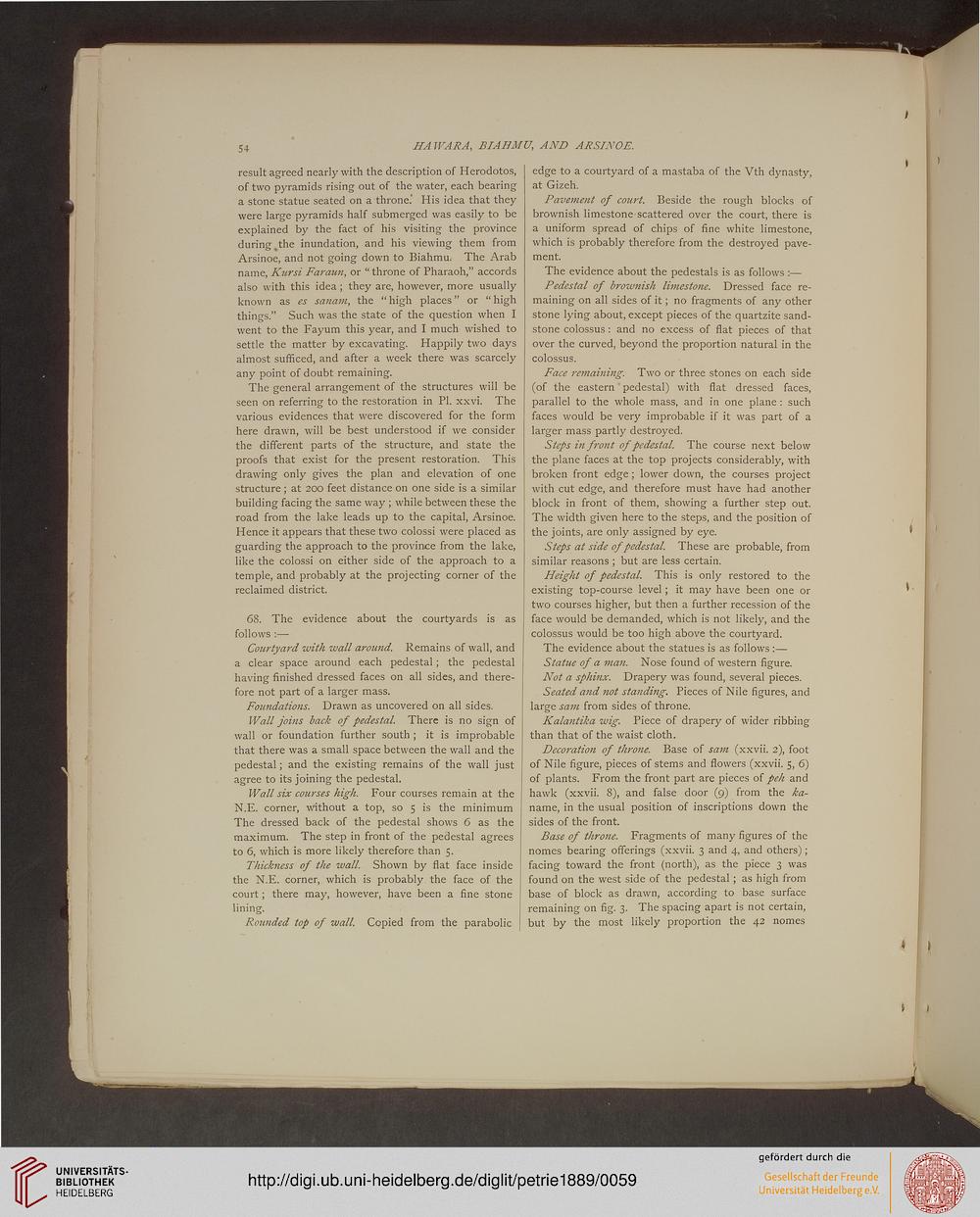 result agreed nearly with the description of Herodotos,
of two pyramids rising out of the water, each bearing
a stone statue seated on a throne.' His idea that they
were large pyramids half submerged was easily to be
explained by the fact of his visiting the province
during ,the inundation, and his viewing them from
Arsinoe, and not going down to Biahmu. The Arab
name, Kursi Faraun, or "throne of Pharaoh," accords
also with this idea; they are, however, more usually
known as es sanam, the " high places" or " high
things." Such was the state of the question when I
went to the Fayum this year, and I much wished to
settle the matter by excavating. Happily two days
almost sufficed, and after a week there was scarcely
any point of doubt remaining.

The general arrangement of the structures will be
seen on referring to the restoration in PL xxvi. The
various evidences that were discovered for the form
here drawn, will be best understood if we consider
the different parts of the structure, and state the
proofs that exist for the present restoration. This
drawing only gives the plan and elevation of one
structure ; at 200 feet distance on one side is a similar
building facing the same way ; while between these the
road from the lake leads up to the capital, Arsinoe.
Hence it appears that these two colossi were placed as
guarding the approach to the province from the lake,
like the colossi on either side of the approach to a
temple, and probably at the projecting corner of the
reclaimed district.

68. The evidence about the courtyards is as
follows :—

Courtyard with wall around. Remains of wall, and
a clear space around each pedestal; the pedestal
having finished dressed faces on all sides, and there-
fore not part of a larger mass.

Foundations. Drawn as uncovered on all sides.

Wall joins back of pedestal. There is no sign of
wall or foundation further south ; it is improbable
that there was a small space between the wall and the
pedestal; and the existing remains of the wall just
agree to its joining the pedestal.

Wall six courses high. Four courses remain at the
N.E. corner, without a top, so 5 is the minimum
The dressed back of the pedestal shows 6 as the
maximum. The step in front of the pedestal agrees
to 6, which is more likely therefore than 5.

Thickness of the wall. Shown by flat face inside
the N.E. corner, which is probably the face of the
court; there may, however, have been a fine stone
lining.

Rounded top of wall. Copied from the parabolic

edge to a courtyard of a mastaba of the Vth dynasty,
at Gizeh.

Pavement of court. Beside the rough blocks of
brownish limestone-scattered over the court, there is
a uniform spread of chips of fine white limestone,
which is probably therefore from the destroyed pave-
ment.

The evidence about the pedestals is as follows :—
Pedestal of brownish limestone. Dressed face re-
maining on all sides of it; no fragments of any other
stone lying about, except pieces of the quartzite sand-
stone colossus : and no excess of flat pieces of that
over the curved, beyond the proportion natural in the
colossus.

Face remaining. Two or three stones on each side
(of the eastern pedestal) with flat dressed faces,
parallel to the whole mass, and in one plane: such
faces would be very improbable if it was part of a
larger mass partly destroyed.

Steps in front of pedestal. The course next below
the plane faces at the top projects considerably, with
broken front edge; lower down, the courses project
with cut edge, and therefore must have had another
block in front of them, showing a further step out.
The width given here to the steps, and the position of
the joints, are only assigned by eye.

Steps at side of pedestal. These are probable, from
similar reasons ; but are less certain.

Height of pedestal. This is only restored to the
existing top-course level; it may have been one or
two courses higher, but then a further recession of the
face would be demanded, which is not likely, and the
colossus would be too high above the courtyard.
The evidence about the statues is as follows:—
Statue of a man. Nose found of western figure.
Not a sphinx. Drapery was found, several pieces.
Seated and not standing. Pieces of Nile figures, and
large sam from sides of throne.

Kalantika wig. Piece of drapery of wider ribbing
than that of the waist cloth.

Decoration of throne. Base of sam (xxvii. 2), foot
of Nile figure, pieces of stems and flowers (xxvii. 5, 6)
of plants. From the front part are pieces of peh and
hawk (xxvii. 8), and false door (9) from the ka-
name, in the usual position of inscriptions down the
sides of the front.

Base of throne. Fragments of many figures of the
nomes bearing offerings (xxvii. 3 and 4, and others);
facing toward the front (north), as the piece 3 was
found on the west side of the pedestal; as high from
base of block as drawn, according to base surface
remaining on fig. 3. The spacing apart is not certain,
but by the most likely proportion the 42 nomes