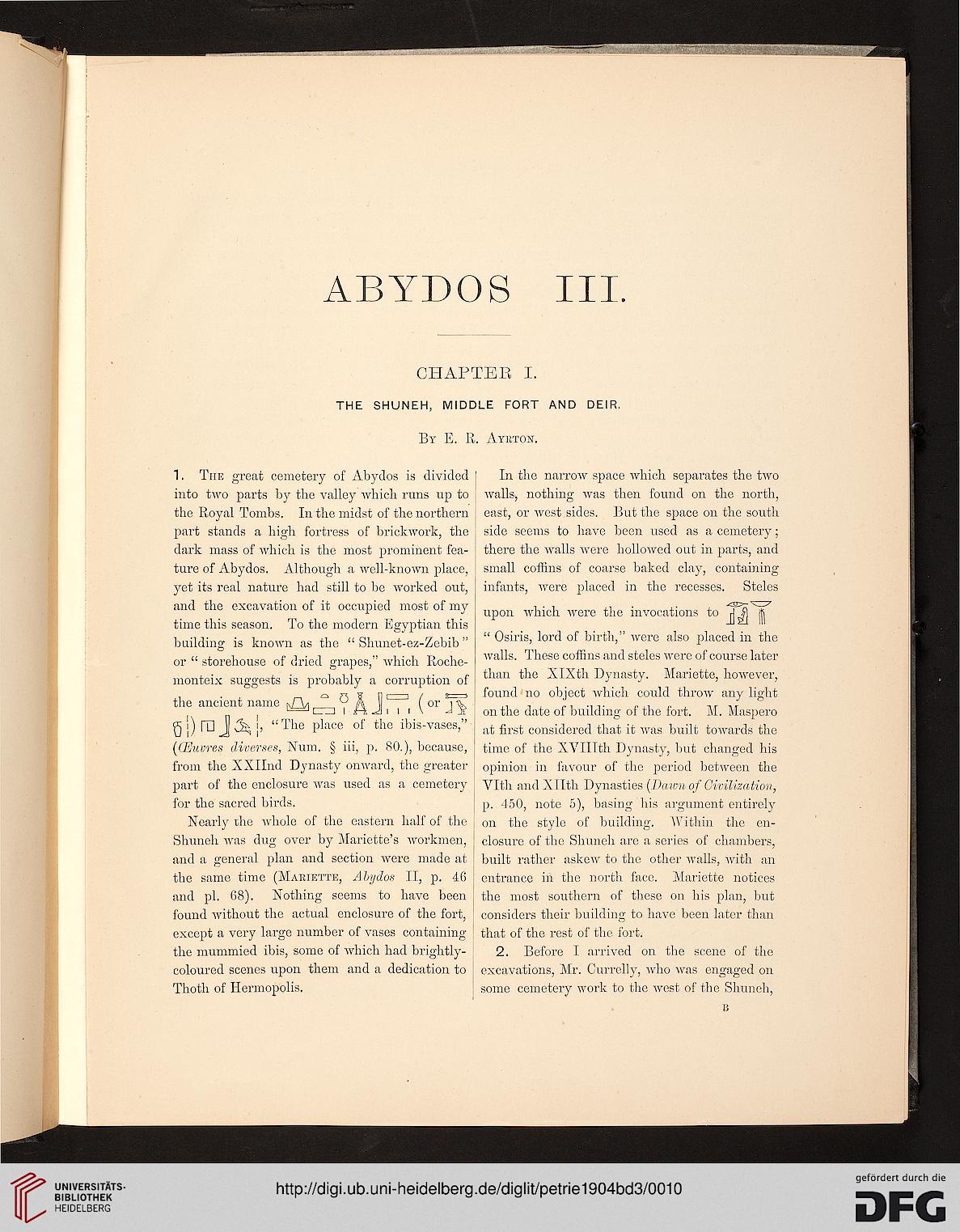 THE SHUNEH, MIDDLE FORT AND DEIR.

1. The great cemetery of Abydos is divided
into two parts by the valley which runs up to
the Royal Tombs. In the midst of the northern
part stands a high fortress of brickwork, the
dark mass of which is the most prominent fea-
ture of Abydos. Although a well-known place,
yet its real nature had still to be worked out,
and the excavation of it occupied most of my
time this season. To the modern Egyptian this
building is known as the " Shunet-ez-Zebib"
or " storehouse of dried grapes," which Roche-
monteix suggests is probably a corruption of

Nearly ihe whole of the eastern half of the
Shuneh was dug over by Mariette's workmen,
and a general plan and section were made at
the same time (Mamette, Abydos II, p. 46
and pi. 68). Nothing seems to have been
found without the actual enclosure of the fort,
except a very large number of vases containing
the mummied ibis, some of which had brightly-
coloured scenes upon them and a dedication to
Thoth of Hermopolis.

In the narrow space which separates the two
walls, nothing was then found on the north,
east, or west sides. But the space on the south
side seems to have been used as a cemetery;
there the walls were hollowed out in parts, and
small coffins of coarse baked clay, containing
infants, were placed in the recesses. Steles

upon which were the invocations to r| fl

" Osiris, lord of birth," were also placed in the
walls. These coffins and steles were of course later
than the XlXth Dynasty. Mariette, however,
found no object which could throw any light
on the date of building of the fort. M. Maspero
at first considered that it was built towards the
time of the XVIIIth Dynasty, but changed his
opinion in favour of the period between the
Vlth and Xllth Dynasties (Dawn of Civilization,
p. 450, note 5), basing his argument entirely
on the style of building. Within the en-
closure of the Shuneh are a series of chambers,
built rather askew to the other Avails, with an
entrance in the north face. Mariette notices
the most southern of these on his plan, but
considers their building to have been later than
that of the rest of the fort.

2. Before I arrived on the scene of the
excavations, Mr. Currelly, who was engaged on
some cemetery work to the west of the Shuneh,