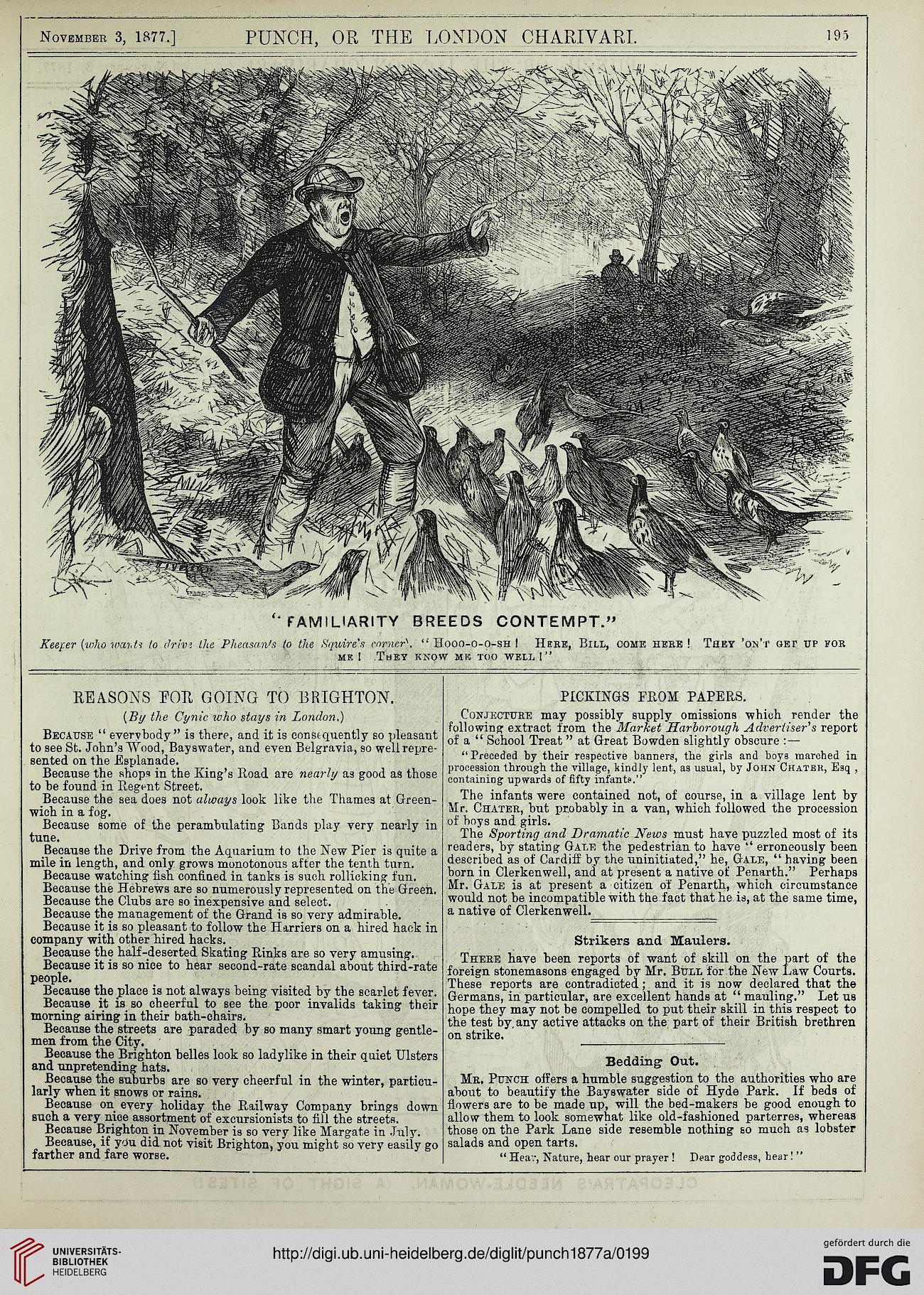 REASONS FOR GOING TO BRIGHTON.

{By the Cynic who stays in London.)

Because " everybody" is there, and it is consequently so pleasant
to see St. John's Wood, Bayswater, and even Belgravia, so well repre-
sented on the Esplanade.

Because the shops in the King's Road are nearly as good as those
to be found in Regent Street.

Because the sea does not always look like the Thames at Green-
wich in a fog.

Because some of the perambulating Bands play very nearly in
tune.

Because the Drive from the Aquarium to the New Pier is quite a
mile in length, and only grows monotonous after the tenth turn.

Because watching fish confined in tanks is such rollicking fun.

Because the Hebrews are so numerously represented on the Green.

Because the Clubs are so inexpensive and select.

Because the management of the Grand is so very admirable.

Because it is so pleasant to follow the Harriers on a hired hack in
company with other hired hacks.

Because the half-deserted Skating Rinks are so very amusing.

Because it is so nice to hear second-rate scandal about third-rate
people.

Because the place is not always being visited by the scarlet fever.

Because it is so cheerful to see the poor invalids taking their
morning airing in their bath-chairs.

Because the streets are paraded by so many smart young gentle-
men from the City.

Because the Brighton belles look so ladylike in their quiet Ulsters
and unpretending hats.

Because the suburbs are so very cheerful in the winter, particu-
larly when it snows or rains.

Because on every holiday the Railway Company brings down
such a very nice assortment of excursionists to fill the streets.

Because Brighton in November is so very like Margate in July.

Because, if you did not visit Brighton, you might so very easily go
farther and fare worse.

Conjecture may possibly supply omissions which render the
following extract from the Market Harborough Advertiser'1 s report
of a " School Treat " at Great Bowden slightly obscure :—■

"Preceded by their respective banners, the girls and boya marched in
procession through the village, kindly lent, as usual, by John Chater, Esq ,
containing upwards of fifty infants."

The infants were contained not, of course, in a village lent by
Mr. Chater, but probably in a van, which followed the procession
of bnys and girls.

The Sporting and Dramatic News must have puzzled most of its
readers, by stating Gale the pedestrian to have " erroneously been
described as of Cardiff by the uninitiated," he, Gale, " having been
born in Clerkenwell, and at present a native of Penarth." Perhaps
Mr. Gale is at present a citizen of Penarth, which circumstance
would not he incompatible with the fact that he is, at the same time,
a native of Clerkenwell.

There have been reports of want of skill on the part of the
foreign stonemasons engaged by Mr. Bull for the New Law Courts.
These reports are contradicted; and it is now declared that the
Germans, in particular, are excellent hands at " mauling." Let us
hope they may not be compelled to put their skill in this respect to
the test by. any active attacks on the part of their British brethren
on strike.

Mr. Punch offers a humble suggestion to the authorities who are
about to beautify the Bayswater side of Hyde Park. If beds of
flowers are to be made up, will the bed-makers be good enough to
allow them to look somewhat like old-fashioned parterres, whereas
those on the Park Lane side resemble nothing so much as lobster
salads and open tarts.