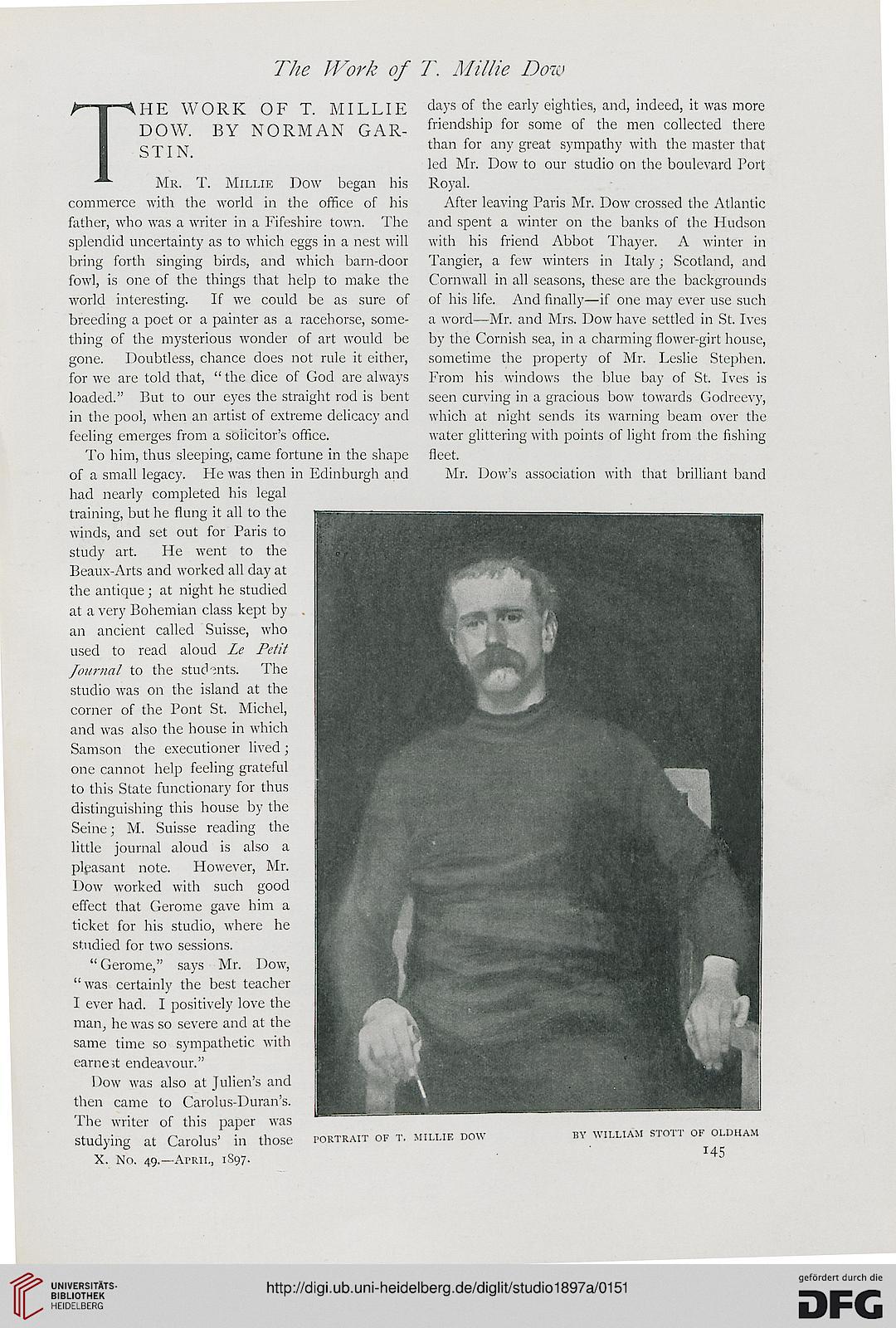 Information about OCR text
The Work of T. Millie Dow

THE WORK OF T. MILLIE days of the early eighties, and, indeed, it was more
DOW. BY NORMAN GAR- friendship for some of the men collected there
g -p j than for any great sympathy with the master that

led Mr. Dow to our studio on the boulevard Port
Mr. T. Millie Dow began his Royal,
commerce with the world in the office of his After leaving Paris Mr. Dow crossed the Atlantic
father, who was a writer in a Fifeshirc town. The and spent a winter on the banks of the Hudson
splendid uncertainty as to which eggs in a nest will with his friend Abbot Thayer. A winter in
bring forth singing birds, and which barn-door Tangier, a few winters in Italy; Scotland, and
fowl, is one of the things that help to make the Cornwall in all seasons, these are the backgrounds
world interesting. If we could be as sure of of his life. And finally—if one may ever use such
breeding a poet or a painter as a racehorse, some- a word—Mr. and Mrs. Dow have settled in St. Ives
thing of the mysterious wonder of art would be by the Cornish sea, in a charming flower-girt house,
gone. Doubtless, chance does not rule it either, sometime the property of Mr. Leslie Stephen,
for we are told that, "the dice of God are always From his windows the blue bay of St. Ives is
loaded." But to our eyes the straight rod is bent seen curving in a gracious bow towards Godreevy,
in the pool, when an artist of extreme delicacy and which at night sends its warning beam over the
feeling emerges from a solicitor's office. water glittering with points of light from the fishing

To him, thus sleeping, came fortune in the shape fleet,
of a small legacy. He was then in Edinburgh and Mr. Dow's association with that brilliant band
had nearly completed his legal
training, but he flung it all to the
winds, and set out for Paris to
study art. He went to the
Beaux-Arts and worked all day at
the antique; at night he studied
at a very Bohemian class kept by
an ancient called Suisse, who
used to read aloud Le Petit
Journal to the students. The
studio was on the island at the
corner of the Pont St. Michel,
and was also the house in which
Samson the executioner lived;
one cannot help feeling grateful
to this State functionary for thus
distinguishing this house by the
Seine; M. Suisse reading the
little journal aloud is also a
pleasant note. However, Mr.
Dow worked with such good
effect that (Jerome gave him a
ticket for his studio, where he
studied for two sessions.

"Gerome," says Mr. Dow,
"was certainly the best teacher
I ever had. I positively love the
man, he was so severe and at the
same time so sympathetic with
earne;t endeavour."

Dow was also at Julien's and
then came to Carolus-Duran's.
The writer of this paper was
studying at Carolus' in those portrait of t. millie now by william stott of^oldham