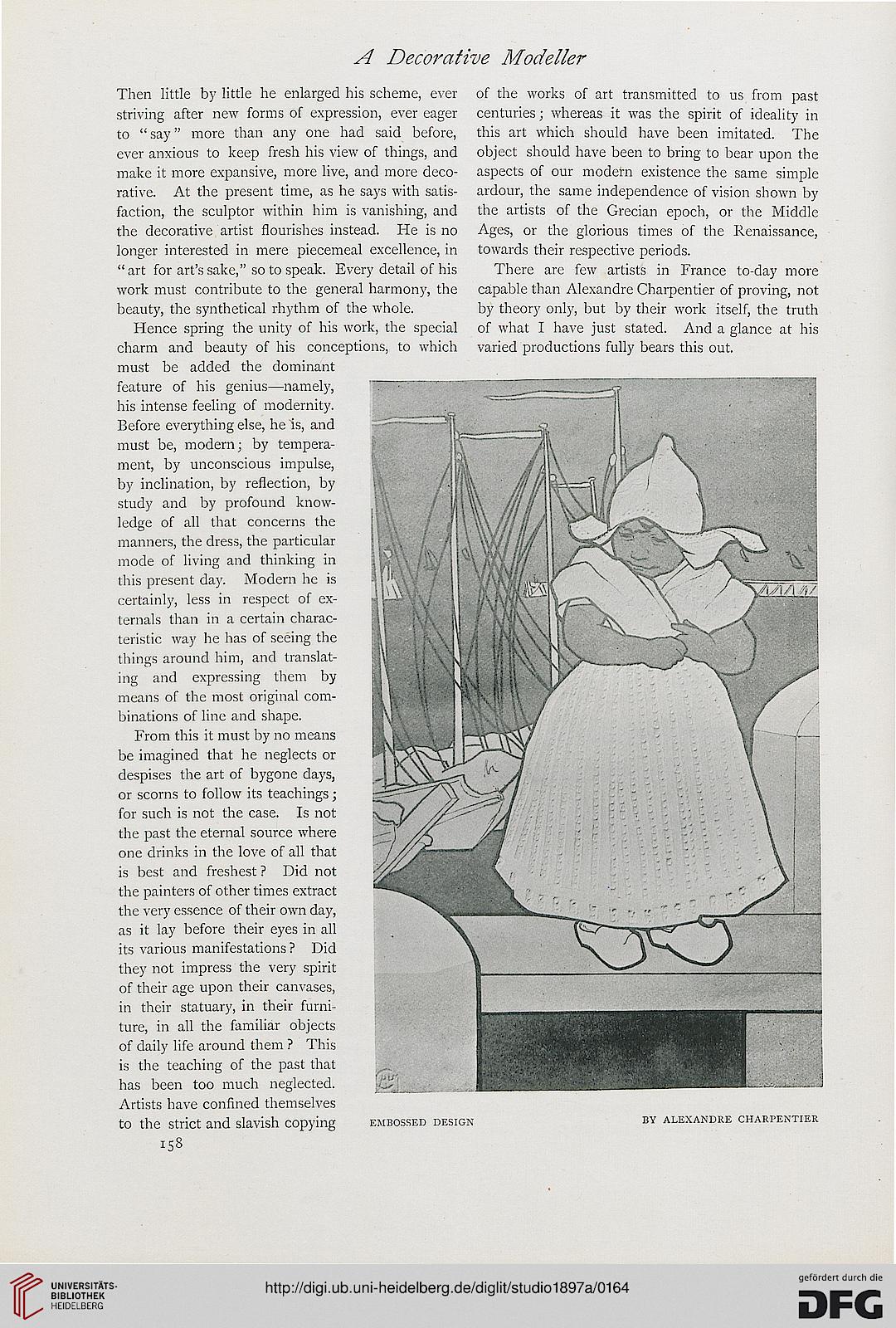 Then little by little he enlarged his scheme, ever of the works of art transmitted to us from past
striving after new forms of expression, ever eager centuries; whereas it was the spirit of ideality in
to "say" more than any one had said before, this art which should have been imitated. The
ever anxious to keep fresh his view of things, and object should have been to bring to bear upon the
make it more expansive, more live, and more deco- aspects of our modern existence the same simple
rative. At the present time, as he says with satis- ardour, the same independence of vision shown by
faction, the sculptor within him is vanishing, and the artists of the Grecian epoch, or the Middle
the decorative artist flourishes instead. He is no Ages, or the glorious times of the Renaissance,
longer interested in mere piecemeal excellence, in towards their respective periods,
"art for art's sake," so to speak. Every detail of his There are few artists in France to-day more
work must contribute to the general harmony, the capable than Alexandre Charpentier of proving, not
beauty, the synthetical rhythm of the whole. by theory only, but by their work itself, the truth

Hence spring the unity of his work, the special of what I have just stated. And a glance at his
charm and beauty of his conceptions, to which varied productions fully bears this out.
must be added the dominant
feature of his genius—namely,
his intense feeling of modernity.
Before everything else, he is, and
must be, modern; by tempera-
ment, by unconscious impulse,
by inclination, by reflection, by
study and by profound know-
ledge of all that concerns the
manners, the dress, the particular
mode of living and thinking in
this present day. Modern he is
certainly, less in respect of ex-
ternals than in a certain charac-
teristic way he has of seeing the }\
things around him, and translat-
ing and expressing them by './'
means of the most original com-

binations of line and shape. \ /

of their age upon their canvases,

in their statuary, in their furni- I ,

ture, in all the familiar objects
of daily life around them ? This
is the teaching of the past that

has been too much neglected. HEHHHHHRBHHflHI^HHHH...... .

Artists have confined themselves

to the strict and slavish copying embossed design by Alexandre charpentier