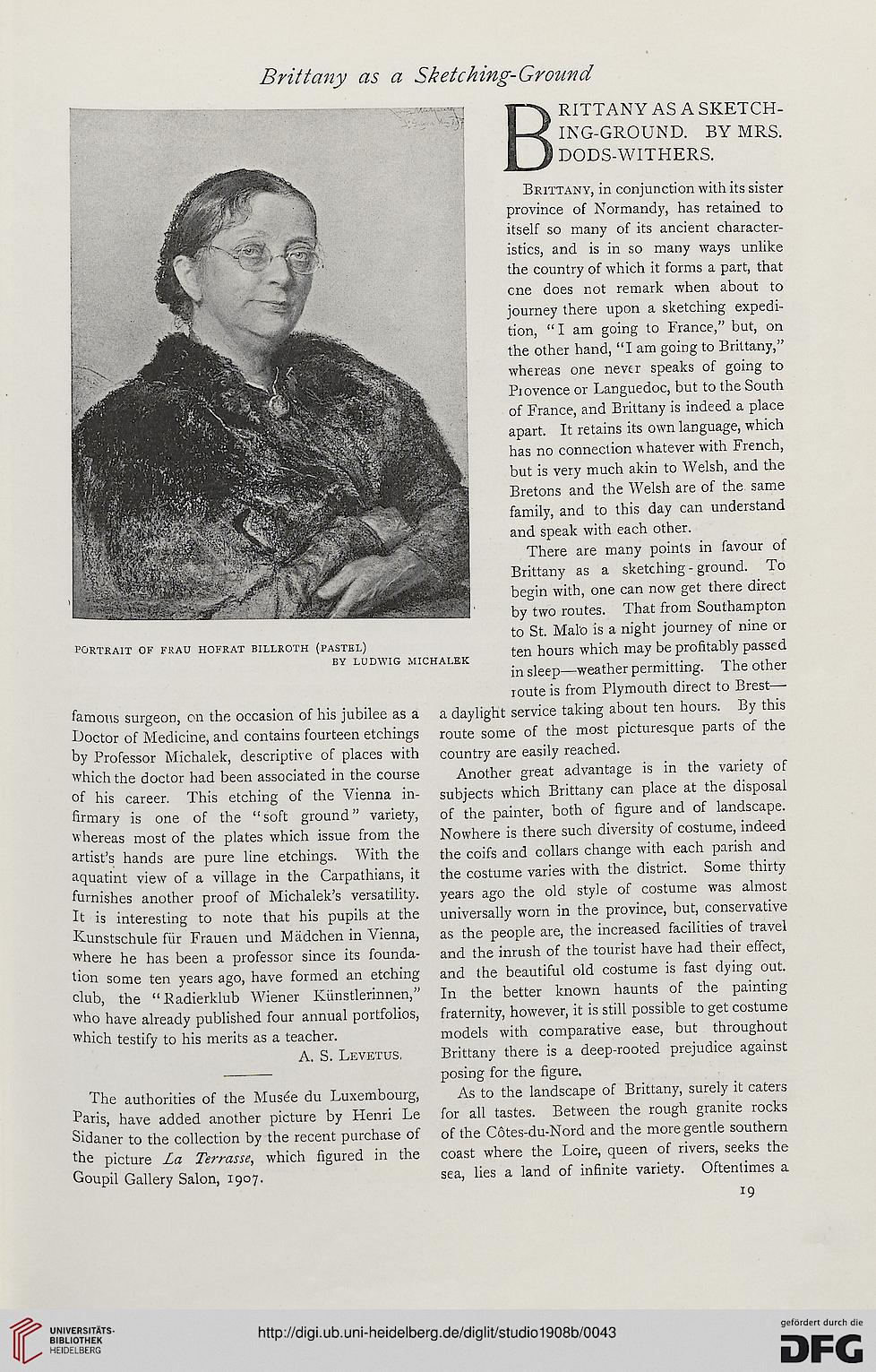 Information about OCR text
Brittany as a Sketching-Ground

famous surgeon, on the occasion of his jubilee as a
Doctor of Medicine, and contains fourteen etchings
by Professor Michalek, descriptive of places with
which the doctor had been associated in the course
of his career. This etching of the Vienna in-
firmary is one of the “soft ground” variety,
whereas most of the plates which issue from the
artist’s hands are pure line etchings. With the
aquatint view of a village in the Carpathians, it
furnishes another proof of Michalek’s versatility.
It is interesting to note that his pupils at the
Kunstschule fiir Frauen und Miidchen in Vienna,
where he has been a professor since its founda-
tion some ten years ago, have formed an etching
club, the “ Kadierklub Wiener Kunstlerinnen,”
who have already published four annual portfolios,
which testify to his merits as a teacher.

The authorities of the Musde du Luxembourg,
Paris, have added another picture by Henri Le
Sidaner to the collection by the recent purchase of
the picture La Terrasse, which figured in the
Goupil Gallery Salon, 1907.

Brittany, in conjunction with its sister
province of Normandy, has retained to
itself so many of its ancient character-
istics, and is in so many ways unlike
the country of which it forms a part, that
cne does not remark when about to
journey there upon a sketching expedi-
tion, “ I am going to France,” but, on
the other hand, “I am going to Brittany,”
whereas one never speaks of going to
Piovence or Languedoc, but to the South
of France, and Brittany is indeed a place
apart. It retains its own language, which
has no connection whatever with French,
but is very much akin to Welsh, and the
Bretons and the Welsh are of the same
family, and to this day can understand
and speak with each other.

There are many points in favour of
Brittany as a sketching - ground. To
begin with, one can now get there direct
by two routes. That from Southampton
to St. Malo is a night journey of nine or
ten hours which may be profitably passed
in sleep—weather permitting. The other
route is from Plymouth direct to Brest—
a daylight service taking about ten hours. By this
route some of the most picturesque parts of the
country are easily reached.

Another great advantage is in the variety of
subjects which Brittany can place at the disposal
of the painter, both of figure and of landscape.
Nowhere is there such diversity of costume, indeed
the coifs and collars change with each parish and
the costume varies wyith the district. Some thirty
years ago the old style of costume was almost
universally worn in the province, but, conservative
as the people are, the increased facilities of travel
and the inrush of the tourist have had their effect,
and the beautiful old costume is fast dying out.
In the better known haunts of the painting
fraternity, however, it is still possible to get costume
models with comparative ease, but throughout
Brittany there is a deep-rooted prejudice against
posing for the figure.

As to the landscape of Brittany, surely it caters
for all tastes. Between the rough granite rocks
of the Cotes-du-Nord and the more gentle southern
coast where the Loire, queen of rivers, seeks the
sea, lies a land of infinite variety. Oftentimes a