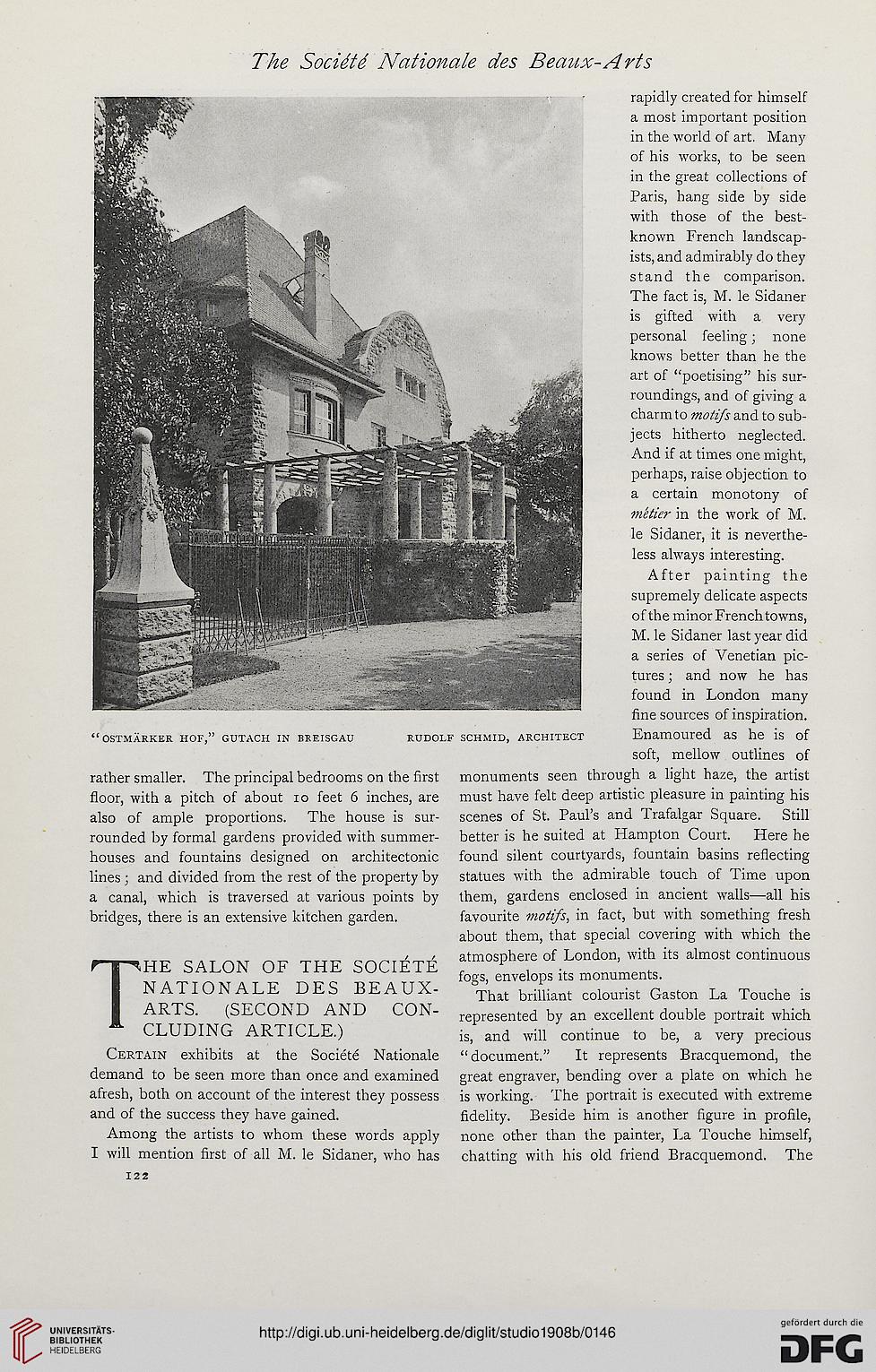 rather smaller. The principal bedrooms on the first
floor, with a pitch of about io feet 6 inches, are
also of ample proportions. The house is sur-
rounded by formal gardens provided with summer-
houses and fountains designed on architectonic
lines ; and divided from the rest of the property by
a canal, which is traversed at various points by
bridges, there is an extensive kitchen garden.

The salon of the societe

Certain exhibits at the Societe Nationale
demand to be seen more than once and examined
afresh, both on account of the interest they possess
and of the success they have gained.

Among the artists to whom these words apply
I will mention first of all M. le Sidaner, who has

rapidly created for himself
a most important position
in the world of art. Many
of his works, to be seen
in the great collections of
Paris, hang side by side
with those of the best-
known French landscap-
ists, and admirably do they
stand the comparison.
The fact is, M. le Sidaner
is gifted with a very
personal feeling; none
knows better than he the
art of “poetising” his sur-
roundings, and of giving a
charm to motifs and to sub-
jects hitherto neglected.
And if at times one might,
perhaps, raise objection to
a certain monotony of
metier in the work of M.
le Sidaner, it is neverthe-
less always interesting.

After painting the
supremely delicate aspects
of the minor French towns,
M. le Sidaner last year did
a series of Venetian pic-
tures ; and now he has
found in London many
fine sources of inspiration.
Enamoured as he is of
soft, mellow outlines of
monuments seen through a light haze, the artist
must have felt deep artistic pleasure in painting his
scenes of St. Paul’s and Trafalgar Square. Still
better is he suited at Hampton Court. Here he
found silent courtyards, fountain basins reflecting
statues with the admirable touch of Time upon
them, gardens enclosed in ancient walls—all his
favourite motifs, in fact, but with something fresh
about them, that special covering with which the
atmosphere of London, with its almost continuous
fogs, envelops its monuments.

That brilliant colourist Gaston La Touche is
represented by an excellent double portrait which
is, and will continue to be, a very precious
“document.” It represents Bracquemond, the
great engraver, bending over a plate on which he
is working. The portrait is executed with extreme
fidelity. Beside him is another figure in profile,
none other than the painter, La Touche himself,
chatting with his old friend Bracquemond. The