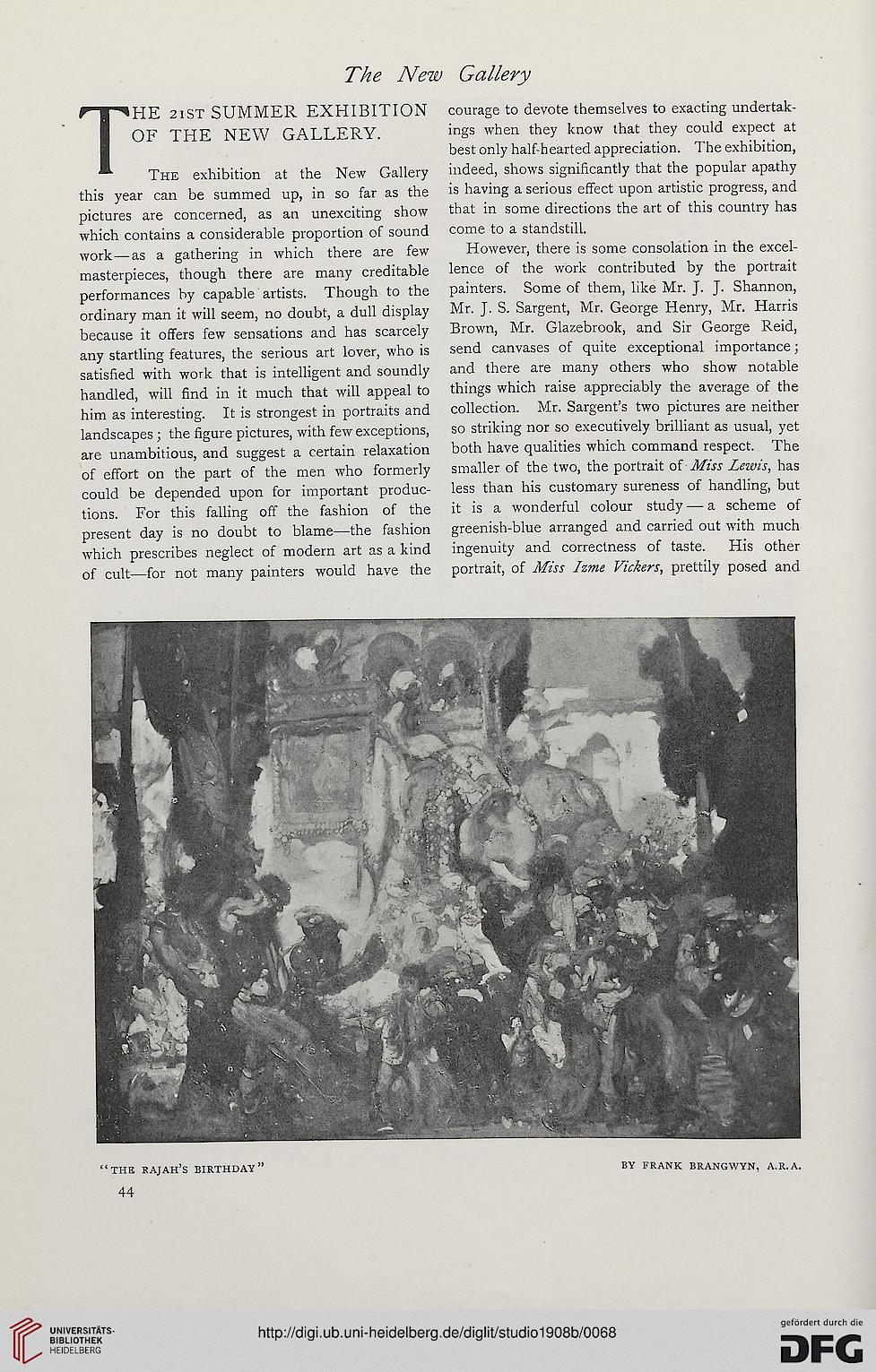 HE 21ST SUMMER EXHIBITION
OF THE NEW GALLERY.

The exhibition at the New Gallery
this year can be summed up, in so far as the
pictures are concerned, as an unexciting show
which contains a considerable proportion of sound
work—as a gathering in which there are few
masterpieces, though there are many creditable
performances by capable artists. Though to the
ordinary man it will seem, no doubt, a dull display
because it offers few sensations and has scarcely
any startling features, the serious art lover, who is
satisfied with work that is intelligent and soundly
handled, will find in it much that will appeal to
him as interesting. It is strongest in portraits and
landscapes ; the figure pictures, with few exceptions,
are unambitious, and suggest a certain relaxation
of effort on the part of the men who formerly
could be depended upon for important produc-
tions. For this falling off the fashion of the
present day is no doubt to blame—the fashion
which prescribes neglect of modern art as a kind
of cult—for not many painters would have the

courage to devote themselves to exacting undertak-
ings when they know that they could expect at
best only half-h earted appreciation. The exhibition,
indeed, shows significantly that the popular apathy
is having a serious effect upon artistic progress, and
that in some directions the art of this country has
come to a standstill.

However, there is some consolation in the excel-
lence of the work contributed by the portrait
painters. Some of them, like Mr. J. J. Shannon,
Mr. J. S. Sargent, Mr. George Henry, Mr. Harris
Brown, Mr. Glazebrook, and Sir George Reid,
send canvases of quite exceptional importance;
and there are many others who show notable
things which raise appreciably the average of the
collection. Mr. Sargent’s two pictures are neither
so striking nor so executively brilliant as usual, yet
both have qualities which command respect. The
smaller of the two, the portrait of Miss Lewis, has
less than his customary sureness of handling, but
it is a wonderful colour study — a scheme of
greenish-blue arranged and carried out with much
ingenuity and correctness of taste. His other
portrait, of Miss Izme Vickers, prettily posed and