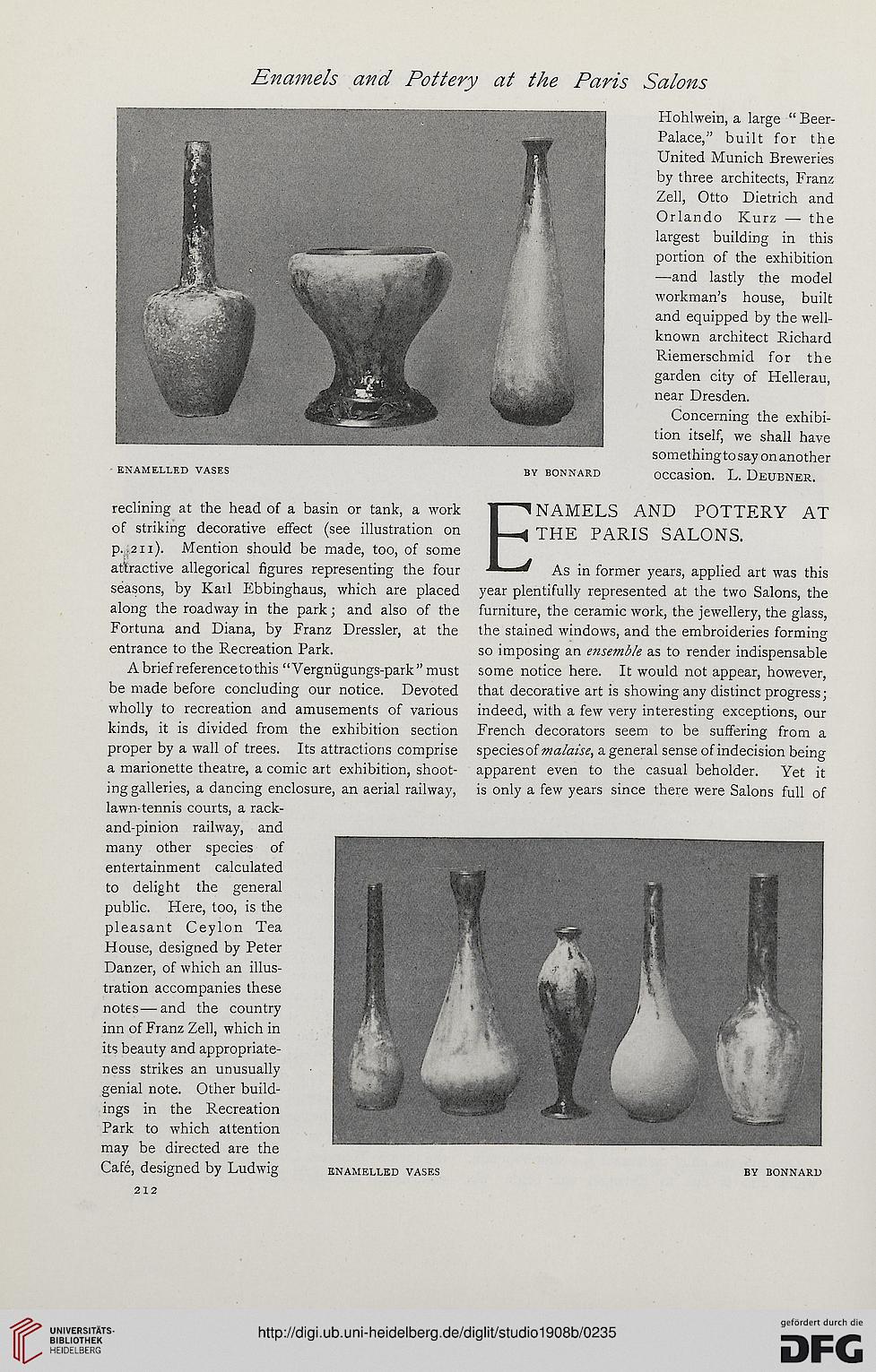 Information about OCR text
Enamels and Pottery at the Paris Salons

Hohhvein, a large “ Beer-
Palace,” built for the
United Munich Breweries
by three architects, Franz
Zell, Otto Dietrich and
Orlando Kurz — the
largest building in this
portion of the exhibition
—and lastly the model
workman’s house, built
and equipped by the well-
known architect Richard
Riemerschmid for the
garden city of Hellerau,
near Dresden.

Concerning the exhibi-
tion itself, we shall have
somethingto say on another
by bonnard occasion. L. Deubner.

reclining at the head of a basin or tank, a work
of striking decorative effect (see illustration on
p. 211). Mention should be made, too, of some
attractive allegorical figures representing the four
seasons, by Kail Ebbinghaus, which are placed
along the roadway in the park; and also of the
Fortuna and Diana, by Franz Dressier, at the
entrance to the Recreation Park.

A brief reference to this “Vergniigungs-park” must
be made before concluding our notice. Devoted
wholly to recreation and amusements of various
kinds, it is divided from the exhibition section
proper by a wall of trees. Its attractions comprise
a marionette theatre, a comic art exhibition, shoot-
ing galleries, a dancing enclosure, an aerial railway,
lawn-tennis courts, a rack-
and-pinion railway, and
many other species of
entertainment calculated
to delight the general
public. Here, too, is the
pleasant Ceylon Tea
House, designed by Peter
Danzer, of which an illus-
tration accompanies these
notes—and the country
inn of Franz Zell, which in
its beauty and appropriate-
ness strikes an unusually
genial note. Other build-
ings in the Recreation
Park to which attention
may be directed are the
Cafe, designed by Ludwig

NAMELS AND POTTERY AT
THE PARIS SALONS.

As in former years, applied art was this
year plentifully represented at the two Salons, the
furniture, the ceramic work, the jewellery, the glass,
the stained windows, and the embroideries forming
so imposing an ensemble as to render indispensable
some notice here. It would not appear, however,
that decorative art is showing any distinct progress;
indeed, with a few very interesting exceptions, our
French decorators seem to be suffering from a
species of malaise, a general sense of indecision being
apparent even to the casual beholder. Yet it
is only a few years since there were Salons full of