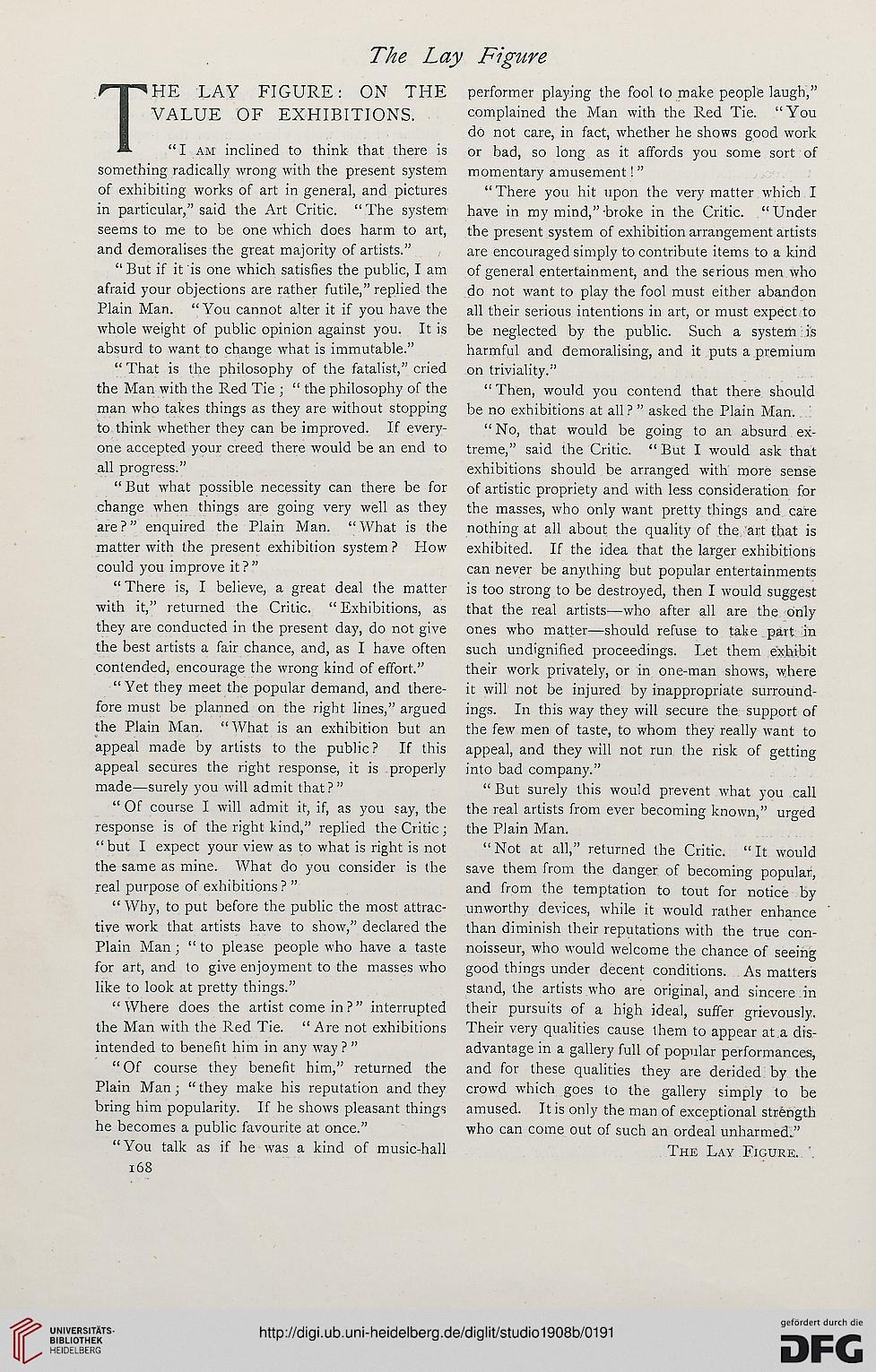 HE LAY FIGURE: ON THE
VALUE OF EXHIBITIONS.

“ I am inclined to think that there is
something radically wrong with the present system
of exhibiting works of art in general, and pictures
in particular,” said the Art Critic. “ The system
seems to me to be one which does harm to art,
and demoralises the great majority of artists.”

“ But if it is one which satisfies the public, I am
afraid your objections are rather futile,” replied the
Plain Man. “You cannot alter it if you have the
whole weight of public opinion against you. It is
absurd to want to change what is immutable.”

“ But what possible necessity can there be for
change when things are going very well as they
are?” enquired the Plain Man. “What is the
matter with the present exhibition system? How
could you improve it?”

“ There is, I believe, a great deal the matter
with it,” returned the Critic. “ Exhibitions, as
they are conducted in the present day, do not give
the best artists a fair chance, and, as I have often
contended, encourage the wrong kind of effort.”

“Yet they meet the popular demand, and there-
fore must be planned on the right lines,” argued
the Plain Man. “What is an exhibition but an
appeal made by artists to the public? If this
appeal secures the right response, it is properly
made—surely you will admit that?”

“ Of course I will admit it, if, as you say, the
response is of the right kind,” replied the Critic;
“but I expect your view as to what is right is not
the same as mine. What do you consider is the
real purpose of exhibitions ? ”

“ Why, to put before the public the most attrac-
tive work that artists have to show,” declared the
Plain Man; “ to please people who have a taste
for art, and to give enjoyment to the masses who
like to look at pretty things.”

“Where does the artist come in ? ” interrupted
the Man with the Red Tie. “ Are not exhibitions
intended to benefit him in any way?”

“ Of course they benefit him,” returned the
Plain Man; “they make his reputation and they
bring him popularity. If he shows pleasant things
he becomes a public favourite at once.”

performer playing the fool to make people laugh,”
complained the Man with the Red Tie. “You
do not care, in fact, whether he shows good work
or bad, so long as it affords you some sort of
momentary amusement! ”

“ There you hit upon the very matter which I
have in my mind,” -broke in the Critic. “ Under
the present system of exhibition arrangement artists
are encouraged simply to contribute items to a kind
of general entertainment, and the serious men who
do not want to play the fool must either abandon
all their serious intentions in art, or must expect to
be neglected by the public. Such a system is
harmful and demoralising, and it puts a premium
on triviality.”

“ Then, would you contend that there should
be no exhibitions at all ? ” asked the Plain Man.

“No, that would be going to an absurd ex-
treme,” said the Critic. “ But I would ask that
exhibitions should be arranged with more sense
of artistic propriety and with less consideration for
the masses, who only want pretty things and care
nothing at all about the quality of the art that is
exhibited. If the idea that the larger exhibitions
can never be anything but popular entertainments
is too strong to be destroyed, then I would suggest
that the real artists—who after all are the only
ones who matter—should refuse to take part in
such undignified proceedings. Let them exhibit
their work privately, or in one-man shows, where
it will not be injured by inappropriate surround-
ings. In this way they will secure the support of
the few men of taste, to whom they really want to
appeal, and they will not run the risk of getting
into bad company.”

“ But surely this would prevent what you call
the real artists from ever becoming known,” urged
the Plain Man.

“Not at all,” returned the Critic. “It would
save them from the danger of becoming popular,
and from the temptation to tout for notice by
unworthy devices, while it would rather enhance
than diminish their reputations with the true con-
noisseur, who would welcome the chance of seeing
good things under decent conditions. As matters
stand, the artists who are original, and sincere in
their pursuits of a high ideal, suffer grievously.
Their very qualities cause them to appear at,a dis-
advantage in a gallery full of popular performances,
and for these qualities they are derided by the
crowd which goes to the gallery simply to be
amused. It is only the man of exceptional strength
who can come out of such an ordeal unharmed.”