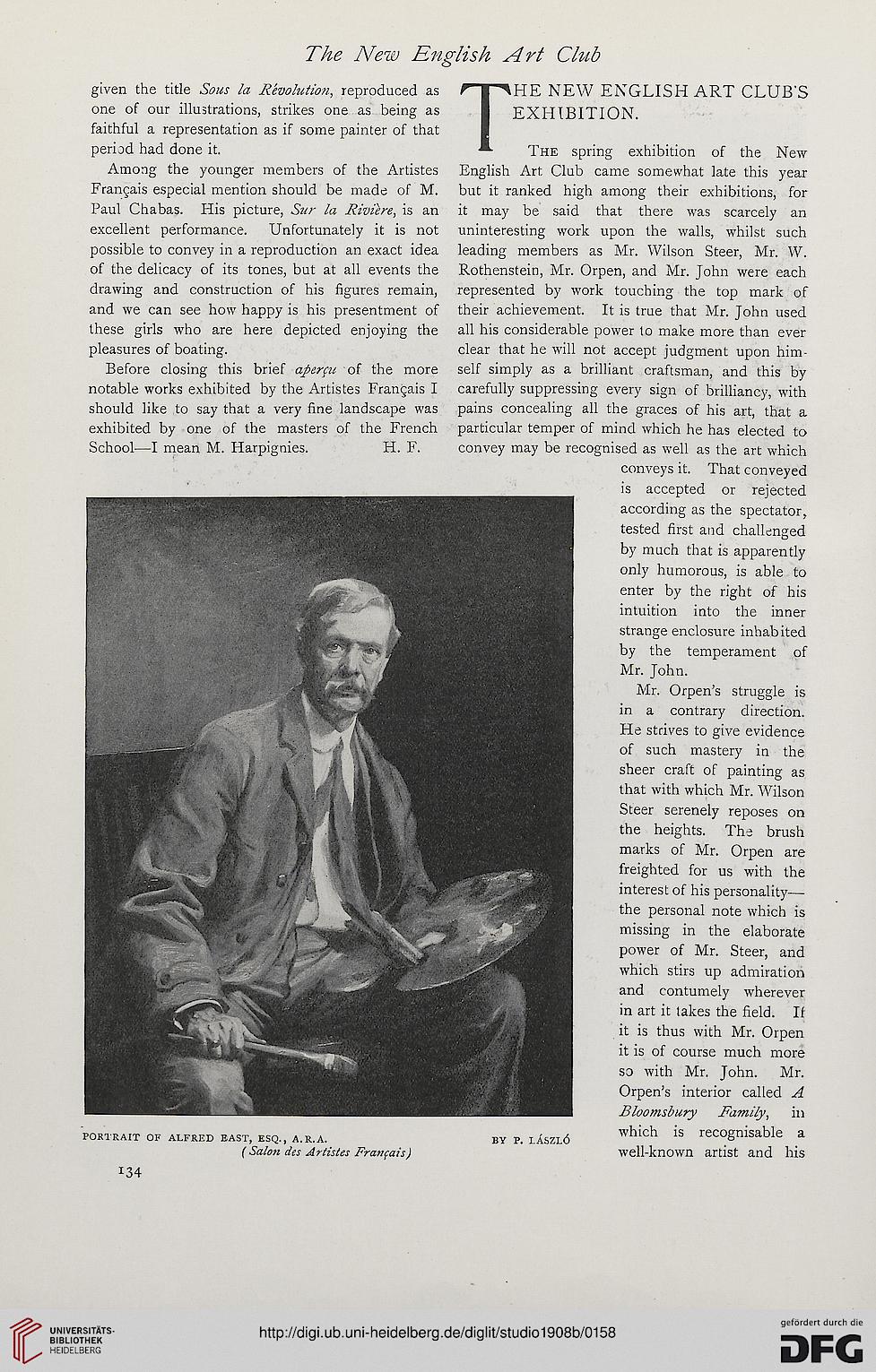 given the title Sous la Revolution, reproduced as
one of our illustrations, strikes one as being as
faithful a representation as if some painter of that
period had done it.

Among the younger members of the Artistes
Frangais especial mention should be made of M.
Paul Chabas. His picture, Stir la Riviere, is an
excellent performance. Unfortunately it is not
possible to convey in a reproduction an exact idea
of the delicacy of its tones, but at all events the
drawing and construction of his figures remain,
and we can see how happy is his presentment of
these girls who are here depicted enjoying the
pleasures of boating.

Before closing this brief aper(u of the more
notable works exhibited by the Artistes Frangais I
should like to say that a very fine landscape was
exhibited by one of the masters of the French
School—I mean M. Harpignies. H. F.

The spring exhibition of the New
English Art Club came somewhat late this year
but it ranked high among their exhibitions, for
it may be said that there was scarcely an
uninteresting work upon the walls, whilst such
leading members as Mr. Wilson Steer, Mr. W.
Rothenstein, Mr. Orpen, and Mr. John were each
represented by work touching the top mark of
their achievement. It is true that Mr. John used
all his considerable power to make more than ever
clear that he will not accept judgment upon him-
self simply as a brilliant craftsman, and this by
carefully suppressing every sign of brilliancy, with
pains concealing all the graces of his art, that a
particular temper of mind which he has elected to
convey may be recognised as well as the art which
conveys it. That conveyed
is accepted or rejected
according as the spectator,
tested first and challenged
by much that is apparently
only humorous, is able to
enter by the right of his
intuition into the inner
strange enclosure inhabited
by the temperament of
Mr. John.

Mr. Orpen’s struggle is
in a contrary direction.
He strives to give evidence
of such mastery in the
sheer craft of painting as
that with which Mr. Wilson
Steer serenely reposes on
the heights. The brush
marks of Mr. Orpen are
freighted for us with the
interest of his personality—
the personal note which is
missing in the elaborate
power of Mr. Steer, and
which stirs up admiration
and contumely wherever
in art it takes the field. If
it is thus with Mr. Orpen
it is of course much more
so with Mr. John. Mr.
Orpen’s interior called A
Bloomsbury Family, in
which is recognisable a
well-known artist and his