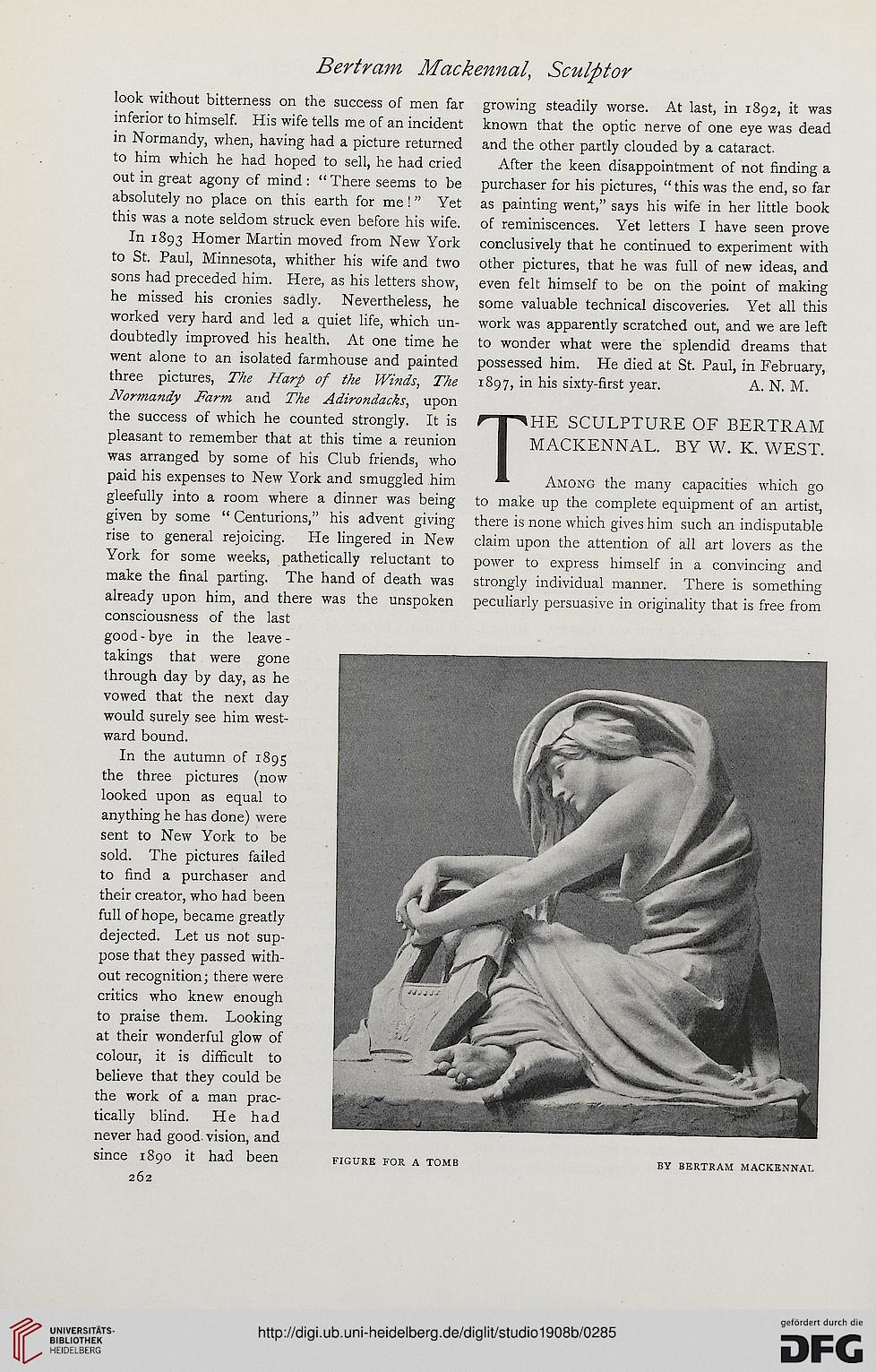 look without bitterness on the success of men far
inferior to himself. His wife tells me of an incident
in Normandy, when, having had a picture returned
to him which he had hoped to sell, he had cried
out in great agony of mind : “ There seems to be
absolutely no place on this earth for me! ” Yet
this was a note seldom struck even before his wife.

In 1893 Homer Martin moved from New York
to St. Paul, Minnesota, whither his wife and two
sons had preceded him. Here, as his letters show,
he missed his cronies sadly. Nevertheless, he
worked very hard and led a quiet life, which un-
doubtedly improved his health. At one time he
went alone to an isolated farmhouse and painted
three pictures, The Harp of the Winds, The
Normandy Farm and The Adirondacks, upon
the success of which he counted strongly. It is
pleasant to remember that at this time a reunion
was arranged by some of his Club friends, who
paid his expenses to New York and smuggled him
gleefully into a room where a dinner was being
given by some “ Centurions,” his advent giving
rise to general rejoicing. He lingered in New
York for some weeks, pathetically reluctant to
make the final parting. The hand of death was
already upon him, and there was the unspoken
consciousness of the last
good - bye in the leave -
takings that were gone
through day by day, as he
vowed that the next day
would surely see him west-
ward bound.

In the autumn of 1895
the three pictures (now
looked upon as equal to
anything he has done) were
sent to New York to be
sold. The pictures failed
to find a purchaser and
their creator, who had been
full of hope, became greatly
dejected. Let us not sup-
pose that they passed with-
out recognition; there were
critics who knew enough
to praise them. Looking
at their wonderful glow of
colour, it is difficult to
believe that they could be
the work of a man prac-
tically blind. He had
never had good vision, and
since r890 it had been

growing steadily worse. At last, in 1892, it was
known that the optic nerve of one eye was dead
and the other partly clouded by a cataract.

After the keen disappointment of not finding a
purchaser for his pictures, “this was the end, so far
as painting went,” says his wife in her little book
of reminiscences. Yet letters I have seen prove
conclusively that he continued to experiment with
other pictures, that he was full of new ideas, and
even felt himself to be on the point of making
some valuable technical discoveries. Yet all this
work was apparently scratched out, and we are left
to wonder what were the splendid dreams that
possessed him. He died at St. Paul, in February,
1897, in his sixty-first year. A. N. M.

HE SCULPTURE OF BERTRAM
MACKENNAL. BY W. K. WEST.

Among the many capacities which go
to make up the complete equipment of an artist,
there is none which gives him such an indisputable
claim upon the attention of all art lovers as the
power to express himself in a convincing and
strongly individual manner. There is something
peculiarly persuasive in originality that is free from

FIGURE FOR A TOMB