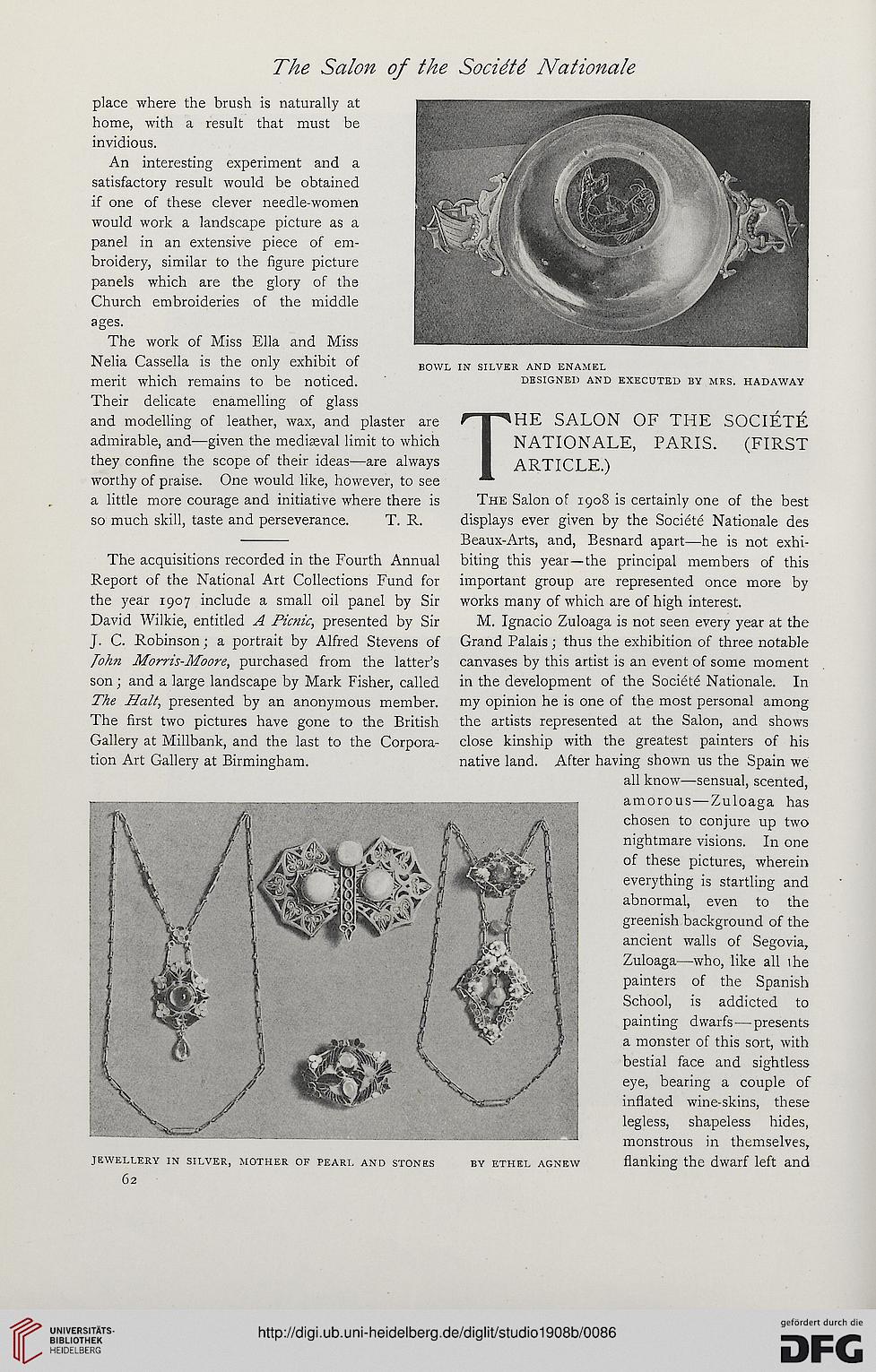 Information about OCR text
The Salon of the Socidtd Nationale

place where the brush is naturally at
home, with a result that must be
invidious.

An interesting experiment and a
satisfactory result would be obtained
if one of these clever needle-women
would work a landscape picture as a
panel in an extensive piece of em-
broidery, similar to the figure picture
panels which are the glory of the
Church embroideries of the middle
ages.

merit which remains to be noticed.

Their delicate enamelling of glass
and modelling of leather, wax, and plaster are
admirable, and—given the mediaeval limit to which
they confine the scope of their ideas—are always
worthy of praise. One would like, however, to see
a little more courage and initiative where there is
so much skill, taste and perseverance. T. R.

IN SILVER AND ENAMEL

DESIGNED AND EXECUTED BY MRS. HADAWAY

HE SALON OF THE SOCIETE
NATIONALE, PARIS. (FIRST
ARTICLE.)

The acquisitions recorded in the Fourth Annual
Report of the National Art Collections Fund for
the year 1907 include a small oil panel by Sir
David Wilkie, entitled A Picnic, presented by Sir
J. C. Robinson; a portrait by Alfred Stevens of
John Morris-Moore, purchased from the latter’s
son; and a large landscape by Mark Fisher, called
The Halt, presented by an anonymous member.
The first two pictures have gone to the British
Gallery at Millbank, and the last to the Corpora-
tion Art Gallery at Birmingham.

JEWELLERY IN SILVER, MOTHER OF PEARL AND STONES

The Salon of 1908 is certainly one of the best
displays ever given by the Societe Nationale des
Beaux-Arts, and, Besnard apart—he is not exhi-
biting this year—the principal members of this
important group are represented once more by
works many of which are of high interest.

M. Ignacio Zuloaga is not seen every year at the
Grand Palais; thus the exhibition of three notable
canvases by this artist is an event of some moment
in the development of the Societd Nationale. In
my opinion he is one of the most personal among
the artists represented at the Salon, and shows
close kinship with the greatest painters of his
native land. After having shown us the Spain we
all know—sensual, scented,
amorous—Zuloaga has
chosen to conjure up two
nightmare visions. In one
of these pictures, wherein
everything is startling and
abnormal, even to the
greenish background of the
ancient walls of Segovia,
Zuloaga—who, like all the
painters of the Spanish
School, is addicted to
painting dwarfs—presents
a monster of this sort, with
bestial face and sightless
eye, bearing a couple of
inflated wine-skins, these
legless, shapeless hides,
monstrous in themselves,
flanking the dwarf left and