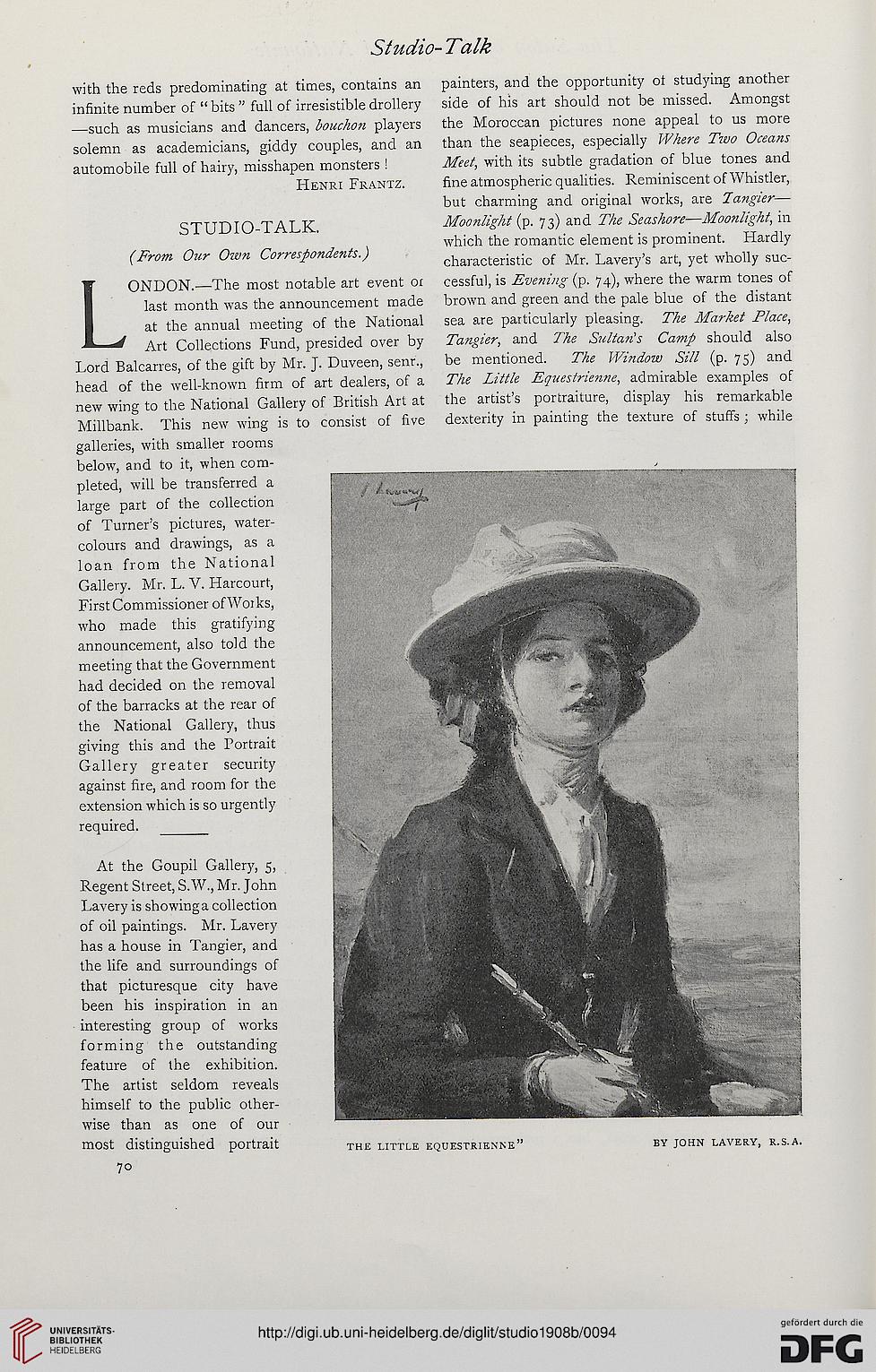 At the Goupil Gallery, 5,

Regent Street, S.W., Mr. John
Lavery is showing a collection
of oil paintings. Mr. Lavery
has a house in Tangier, and
the life and surroundings of
that picturesque city have
been his inspiration in an
interesting group of works
forming the outstanding
feature of the exhibition.

The artist seldom reveals
himself to the public other-
wise than as one of our
most distinguished portrait the little equestrienne” by john lavery, r.s.a.

with the reds predominating at times, contains an
infinite number of “ bits ” full of irresistible drollery
—such as musicians and dancers, bouchon players
solemn as academicians, giddy couples, and an
automobile full of hairy, misshapen monsters !

LONDON.—The most notable art event 01
last month was the announcement made
at the annual meeting of the National
Art Collections Fund, presided over by
Lord Balcarres, of the gift by Mr. J. Duveen, senr.,
head of the well-known firm of art dealers, of a
new wing to the National Gallery of British Art at
Millbank. This new wing is to consist of five
galleries, with smaller rooms
below, and to it, when com-

pleted, will be transferred a
large part of the collection
of Turner’s pictures, water-
colours and drawings, as a
loan from the National
Gallery. Mr. L. V. Harcourt,
First Commissioner ofWoiks,
who made this gratifying
announcement, also told the
meeting that the Government
had decided on the removal
of the barracks at the rear of
the National Gallery, thus
giving this and the Portrait
Gallery greater security
against fire, and room for the
extension which is so urgently
required. _

painters, and the opportunity ot studying another
side of his art should not be missed. Amongst
the Moroccan pictures none appeal to us more
than the seapieces, especially Where Two Oceans
Meet, with its subtle gradation of blue tones and
fine atmospheric qualities. Reminiscent of Whistler,
but charming and original works, are Tangier—
Moonlight (p. 73) and The Seashore—Moonlight, in
which the romantic element is prominent. Hardly
characteristic of Mr. Lavery’s art, yet wholly suc-
cessful, is Evening (p. 74), where the warm tones of
brown and green and the pale blue of the distant
sea are particularly pleasing. The Market Place,
Tangier, and The Sultan's Camp should also
be mentioned. The Window Sill (p. 75) and
The Little Equestrienne, admirable examples of
the artist’s portraiture, display his remarkable
dexterity in painting the texture of stuffs ; while