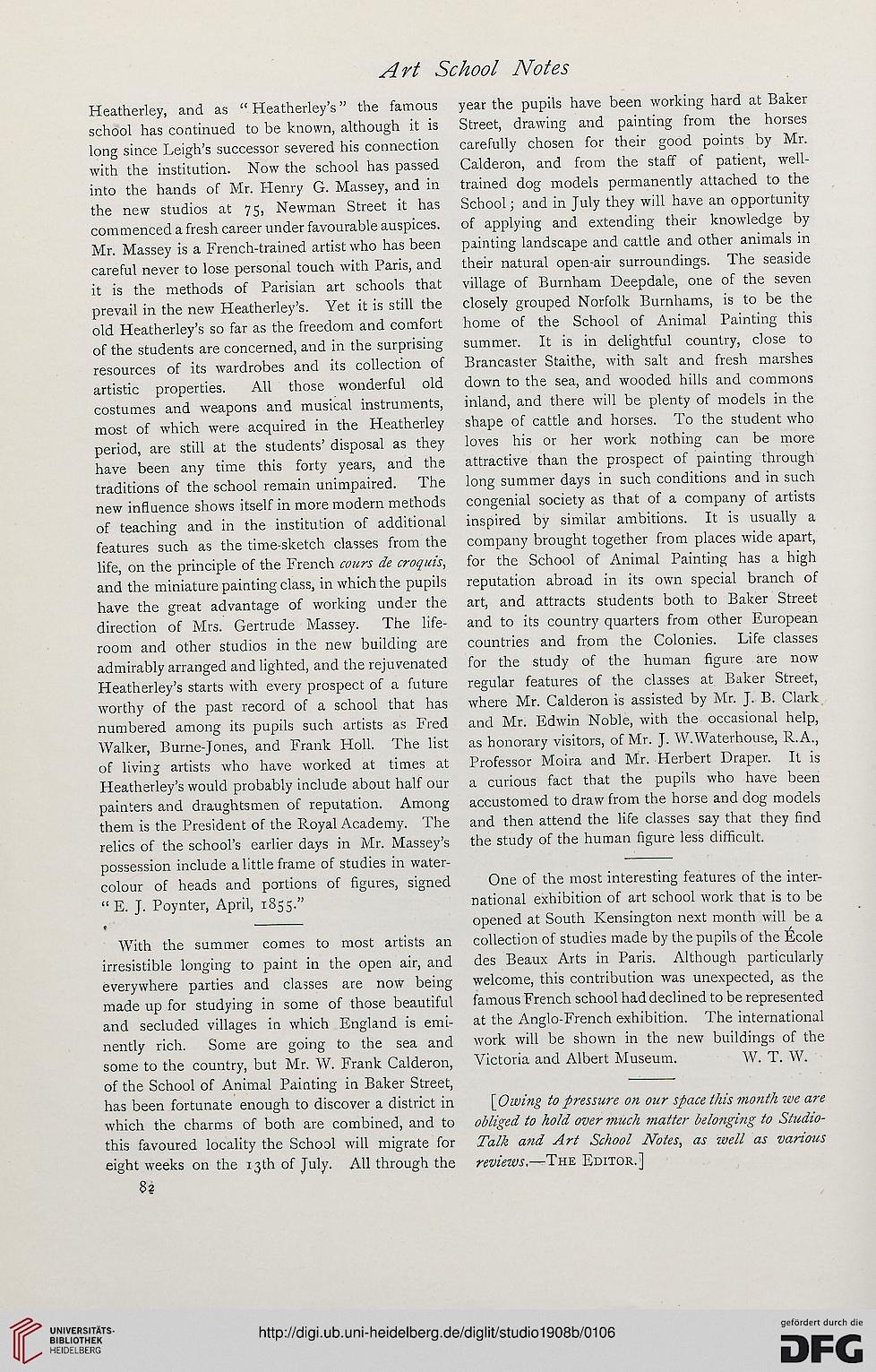 Heatherley, and as “ Heatherley’s ” the famous
school has continued to be known, although it is
long since Leigh’s successor severed his connection
with the institution. Now the school has passed
into the hands of Mr. Henry G. Massey, and in
the new studios at 75, Newman Street it has
commenced a fresh career under favourable auspices.
Mr. Massey is a French-trained artist who has been
careful never to lose personal touch with Paris, and
it is the methods of Parisian art schools that
prevail in the new Heatherley’s. Yet it is still the
old Heatherley’s so far as the freedom and comfort
of the students are concerned, and in the surprising
resources of its wardrobes and its collection of
artistic properties. All those wonderful old
costumes and weapons and musical instruments,
most of which were acquired in the Heatherley
period, are still at the students’ disposal as they
have been any time this forty years, and the
traditions of the school remain unimpaired. The
new influence shows itself in more modern methods
of teaching and in the institution of additional
features such as the time-sketch classes from the
life, on the principle of the French cours de croquis,
and the miniature painting class, in which the pupils
have the great advantage of working under the
direction of Mrs. Gertrude Massey. The life-
room and other studios in the new building are
admirably arranged and lighted, and the rejuvenated
Heatherley’s starts with every prospect of a future
worthy of the past record of a school that has
numbered among its pupils such artists as Fred
Walker, Burne-Jones, and Frank Holl. The list
of living artists who have worked at times at
Heatherley’s would probably include about half our
painters and draughtsmen of reputation. Among
them is the President of the Royal Academy. The
relics of the school’s earlier days in Mr. Massey’s
possession include a little frame of studies in water-
colour of heads and portions of figures, signed
“ E. J. Poynter, April, 1855.”

With the summer comes to most artists an
irresistible longing to paint in the open air, and
everywhere parties and classes are now being
made up for studying in some of those beautiful
and secluded villages in which England is emi-
nently rich. Some are going to the sea and
some to the country, but Mr. W. Frank Calderon,
of the School of Animal Painting in Baker Street,
has been fortunate enough to discover a district in
which the charms of both are combined, and to
this favoured locality the School will migrate for
eight weeks on the 13 th of July. All through the
8?

year the pupils have been working hard at Baker
Street, drawing and painting from the horses
carefully chosen for their good points by Mr.
Calderon, and from the staff of patient, well-
trained dog models permanently attached to the
School; and in July they will have an opportunity
of applying and extending their knowledge by
painting landscape and cattle and other animals in
their natural open-air surroundings. The seaside
village of Burnham Deepdale, one of the seven
closely grouped Norfolk Burnhams, is to be the
home of the School of Animal Painting this
summer. It is in delightful country, close to
Brancaster Staithe, with salt and fresh marshes
down to the sea, and wooded hills and commons
inland, and there will be plenty of models in the
shape of cattle and horses. To the student who
loves his or her work nothing can be more
attractive than the prospect of painting through
long summer days in such conditions and in such
congenial society as that of a company of artists
inspired by similar ambitions. It is usually a
company brought together from places wide apart,
for the School of Animal Painting has a high
reputation abroad in its own special branch of
art, and attracts students both to Baker Street
and to its country quarters from other European
countries and from the Colonies. Life classes
for the study of the human figure are now
regular features of the classes at Baker Street,
where Mr. Calderon is assisted by Mr. J. B. Clark
and Mr. Edwin Noble, with the occasional help,
as honorary visitors, of Mr. J. W.Waterhouse, R.A.,
Professor Moira and Mr. Herbert Draper. It is
a curious fact that the pupils who have been
accustomed to draw from the horse and dog models
and then attend the life classes say that they find
the study of the human figure less difficult.

One of the most interesting features of the inter-
national exhibition of art school work that is to be
opened at South Kensington next month will be a
collection of studies made by the pupils of the £cole
des Beaux Arts in Paris. Although particularly
welcome, this contribution was unexpected, as the
famous French school had declined to be represented
at the Anglo-French exhibition. The international
work will be shown in the new buildings of the
Victoria and Albert Museum. W. T. W.

[Owing to pressure on our space this month we are
obliged to hold over much matter belonging to Studio-
Talk and Art School Notes, as well as various
reviews.—The Editor.]