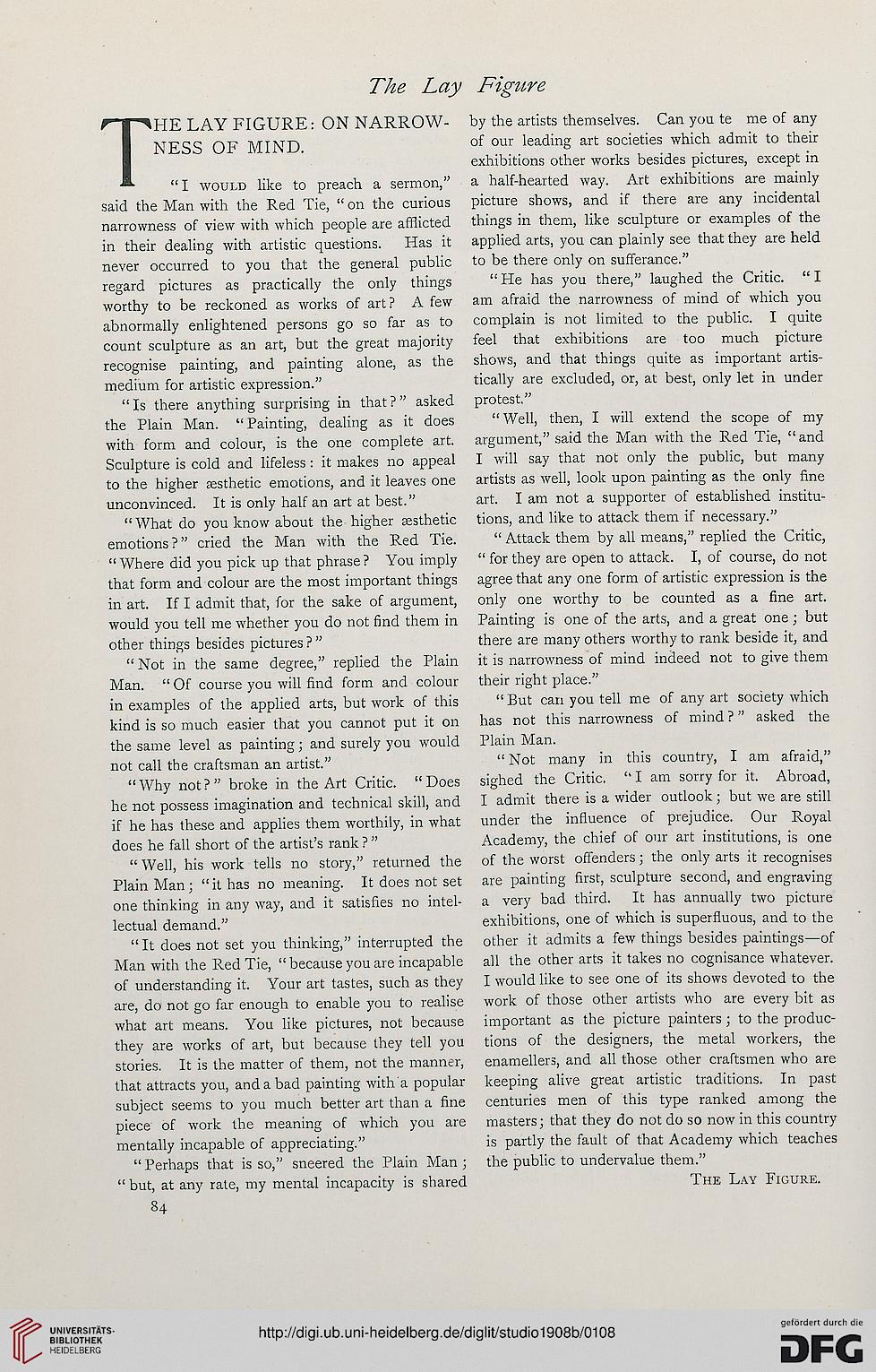 THE LAY FIGURE: ON NARROW-
NESS OF MIND.

“ I would like to preach a sermon,”
said the Man with the Red Tie, “ on the curious
narrowness of view with which people are afflicted
in their dealing with artistic questions. Has it
never occurred to you that the general public
regard pictures as practically the only things
worthy to be reckoned as works of art? A few
abnormally enlightened persons go so far as to
count sculpture as an art, but the great majority
recognise painting, and painting alone, as the
medium for artistic expression.”

“ Is there anything surprising in that ? ” asked
the Plain Man. “Painting, dealing as it does
with form and colour, is the one complete art.
Sculpture is cold and lifeless : it makes no appeal
to the higher aesthetic emotions, and it leaves one
unconvinced. It is only half an art at best.”

“ What do you know about the higher aesthetic
emotions?” cried the Man with the Red Tie.
“Where did you pick up that phrase? You imply
that form and colour are the most important things
in art. If I admit that, for the sake of argument,
would you tell me whether you do not find them in
other things besides pictures ? ”

“ Not in the same degree,” replied the Plain
Man. “ Of course you will find form and colour
in examples of the applied arts, but work of this
kind is so much easier that you cannot put it on
the same level as painting; and surely you would
not call the craftsman an artist.”

“Why not?” broke in the Art Critic. “Does
he not possess imagination and technical skill, and
if he has these and applies them worthily, in what
does he fall short of the artist’s rank ? ”

“ Well, his work tells no story,” returned the
Plain Man ; “ it has no meaning. It does not set
one thinking in any way, and it satisfies no intel-
lectual demand.”

“ It does not set you thinking,” interrupted the
Man with the Red Tie, “ because you are incapable
of understanding it. Your art tastes, such as they
are, do not go far enough to enable you to realise
what art means. You like pictures, not because
they are works of art, but because they tell you
stories. It is the matter of them, not the manner,
that attracts you, and a bad painting with a popular
subject seems to you much better art than a fine
piece of work the meaning of which you are
mentally incapable of appreciating.”

“ Perhaps that is so,” sneered the Plain Man ;
“ but, at any rate, my mental incapacity is shared
84

by the artists themselves. Can you te me of any
of our leading art societies which admit to their
exhibitions other works besides pictures, except in
a half-hearted way. Art exhibitions are mainly
picture shows, and if there are any incidental
things in them, like sculpture or examples of the
applied arts, you can plainly see that they are held
to be there only on sufferance.”

“ He has you there,” laughed the Critic. “ I
am afraid the narrowness of mind of which you
complain is not limited to the public. I quite
feel that exhibitions are too much picture
shows, and that things quite as important artis-
tically are excluded, or, at best, only let in under
protest,”

“ Well, then, I will extend the scope of my
argument,” said the Man with the Red Tie, “ and
I will say that not only the public, but many
artists as well, look upon painting as the only fine
art. I am not a supporter of established institu-
tions, and like to attack them if necessary.”

“ Attack them by all means,” replied the Critic,
“ for they are open to attack. I, of course, do not
agree that any one form of artistic expression is the
only one worthy to be counted as a fine art.
Painting is one of the arts, and a great one ; but
there are many others worthy to rank beside it, and
it is narrowness of mind indeed not to give them
their right place.”

“ But can you tell me of any art society which
has not this narrowness of mind ? ” asked the
Plain Man.

“ Not many in this country, I am afraid,”
sighed the Critic. “ I am sorry for it. Abroad,
I admit there is a wider outlook ; but we are still
under the influence of prejudice. Our Royal
Academy, the chief of our art institutions, is one
of the worst offenders; the only arts it recognises
are painting first, sculpture second, and engraving
a very bad third. It has annually two picture
exhibitions, one of which is superfluous, and to the
other it admits a few things besides paintings—of
all the other arts it takes no cognisance whatever.
I would like to see one of its shows devoted to the
work of those other artists who are every bit as
important as the picture painters ; to the produc-
tions of the designers, the metal workers, the
enamellers, and all those other craftsmen who are
keeping alive great artistic traditions. In past
centuries men of this type ranked among the
masters; that they do not do so now in this country
is partly the fault of that Academy which teaches
the public to undervalue them.”