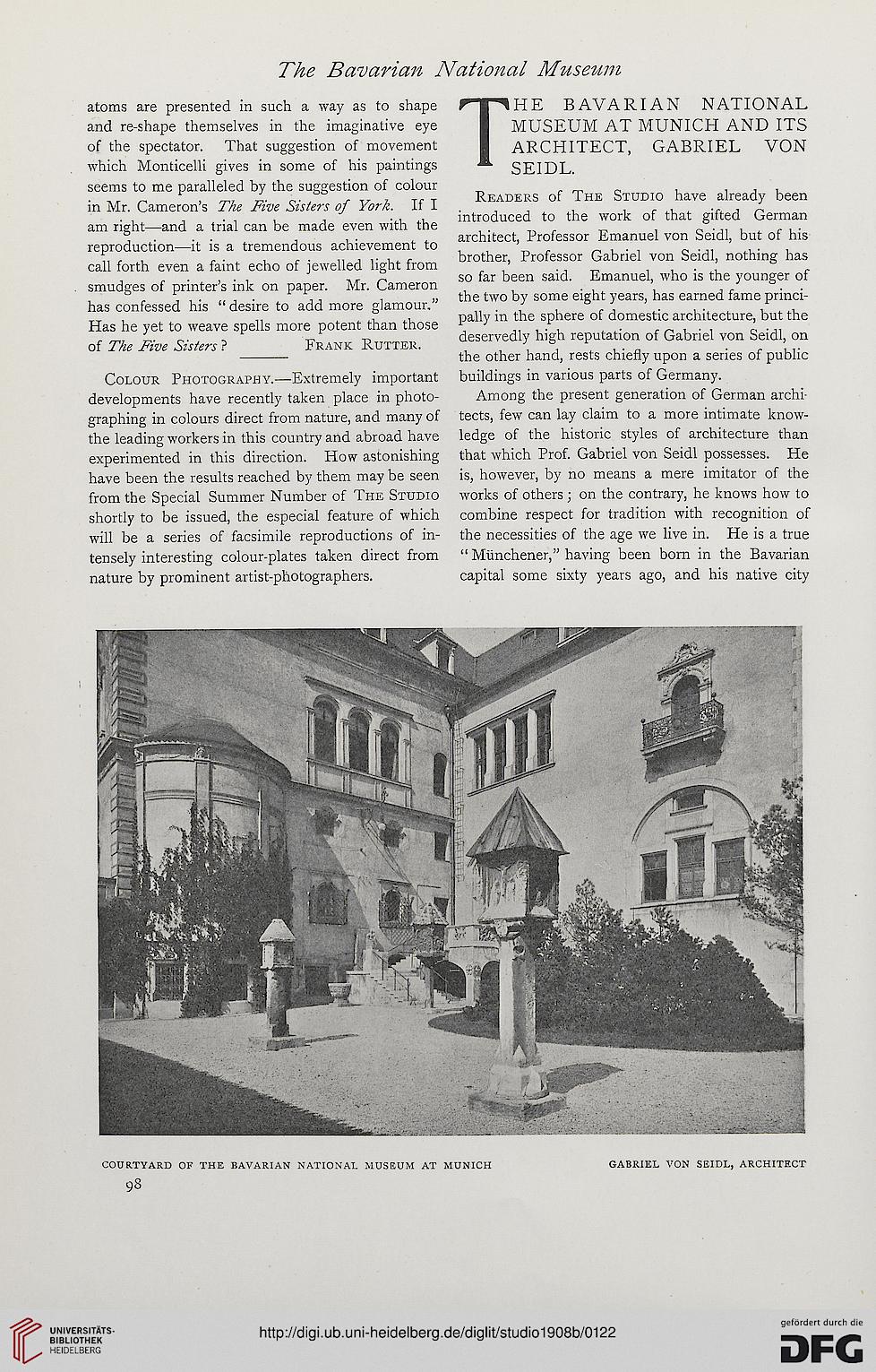 atoms are presented in such a way as to shape
and re-shape themselves in the imaginative eye
of the spectator. That suggestion of movement
which Monticelli gives in some of his paintings
seems to me paralleled by the suggestion of colour
in Mr. Cameron’s The Five Sisters of York. If I
am right—and a trial can be made even with the
reproduction—it is a tremendous achievement to
call forth even a faint echo of jewelled light from
smudges of printer’s ink on paper. Mr. Cameron
has confessed his “ desire to add more glamour.”
Has he yet to weave spells more potent than those
of The Five Sisters ? Frank Rutter.

Colour Photography.—Extremely important
developments have recently taken place in photo-
graphing in colours direct from nature, and many of
the leading workers in this country and abroad have
experimented in this direction. How astonishing
have been the results reached by them may be seen
from the Special Summer Number of The Studio
shortly to be issued, the especial feature of which
will be a series of facsimile reproductions of in-
tensely interesting colour-plates taken direct from
nature by prominent artist-photographers.

MUSEUM AT MUNICH AND ITS
ARCHITECT, GABRIEL VON
SEIDL.

Readers of The Studio have already been
introduced to the work of that gifted German
architect, Professor Emanuel von Seidl, but of his
brother, Professor Gabriel von Seidl, nothing has
so far been said. Emanuel, who is the younger of
the two by some eight years, has earned fame princi-
pally in the sphere of domestic architecture, but the
deservedly high reputation of Gabriel von Seidl, on
the other hand, rests chiefly upon a series of public
buildings in various parts of Germany.

Among the present generation of German archi-
tects, few can lay claim to a more intimate know-
ledge of the historic styles of architecture than
that which Prof. Gabriel von Seidl possesses. He
is, however, by no means a mere imitator of the
works of others; on the contrary, he knows how to
combine respect for tradition with recognition of
the necessities of the age we live in. He is a true
“ Miinchener,” having been bom in the Bavarian
capital some sixty years ago, and his native city


COURTYARD OF THE BAVARIAN NATIONAL MUSEUM AT MUNICH