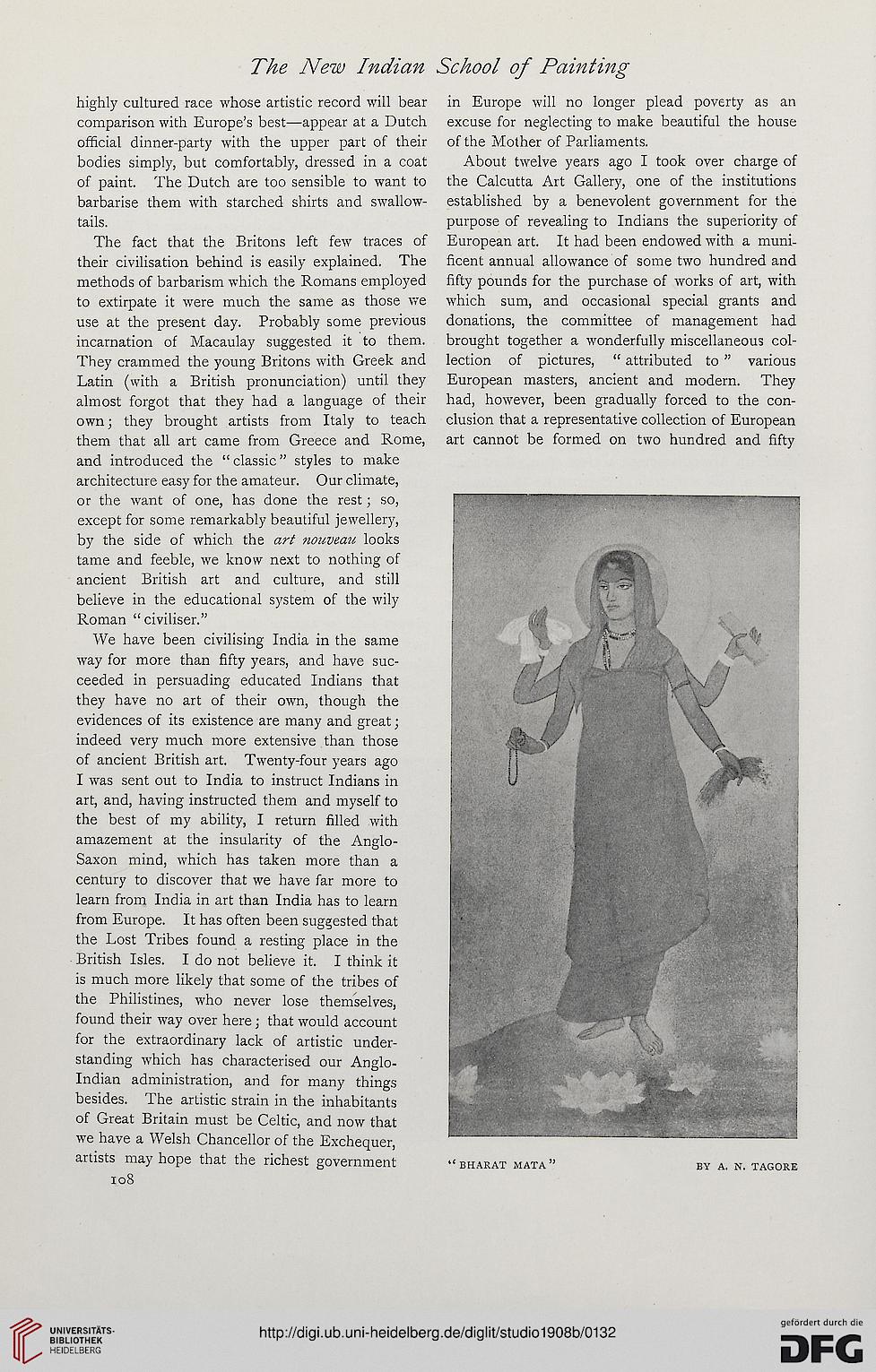 highly cultured race whose artistic record will bear
comparison with Europe’s best—appear at a Dutch
official dinner-party with the upper part of their
bodies simply, but comfortably, dressed in a coat
of paint. The Dutch are too sensible to want to
barbarise them with starched shirts and swallow-
tails.

The fact that the Britons left few traces of
their civilisation behind is easily explained. The
methods of barbarism which the Romans employed
to extirpate it were much the same as those we
use at the present day. Probably some previous
incarnation of Macaulay suggested it to them.
They crammed the young Britons with Greek and
Latin (with a British pronunciation) until they
almost forgot that they had a language of their
own; they brought artists from Italy to teach
them that all art came from Greece and Rome,
and introduced the “ classic ” styles to make
architecture easy for the amateur. Our climate,
or the want of one, has done the rest; so,
except for some remarkably beautiful jewellery,
by the side of which the art nouveau looks
tame and feeble, we know next to nothing of
ancient British art and culture, and still
believe in the educational system of the wily
Roman “ civiliser.”

We have been civilising India in the same
way for more than fifty years, and have suc-
ceeded in persuading educated Indians that
they have no art of their own, though the
evidences of its existence are many and great;
indeed very much more extensive than those
of ancient British art. Twenty-four years ago
I was sent out to India to instruct Indians in
art, and, having instructed them and myself to
the best of my ability, I return filled with
amazement at the insularity of the Anglo-
Saxon mind, which has taken more than a
century to discover that we have far more to
learn from India in art than India has to learn
from Europe. It has often been suggested that
the Lost Tribes found a resting place in the
British Isles. I do not believe it. I think it
is much more likely that some of the tribes of
the Philistines, who never lose themselves,
found their way over here ; that would account
for the extraordinary lack of artistic under-
standing which has characterised our Anglo-
Indian administration, and for many things
besides. The artistic strain in the inhabitants
of Great Britain must be Celtic, and now that
we have a Welsh Chancellor of the Exchequer,
artists may hope that the richest government
108

in Europe will no longer plead poverty as an
excuse for neglecting to make beautiful the house
of the Mother of Parliaments.

About twelve years ago I took over charge of
the Calcutta Art Gallery, one of the institutions
established by a benevolent government for the
purpose of revealing to Indians the superiority of
European art. It had been endowed with a muni-
ficent annual allowance of some two hundred and
fifty pounds for the purchase of works of art, with
which sum, and occasional special grants and
donations, the committee of management had
brought together a wonderfully miscellaneous col-
lection of pictures, “ attributed to ” various
European masters, ancient and modern. They
had, however, been gradually forced to the con-
clusion that a representative collection of European
art cannot be formed on two hundred and fifty